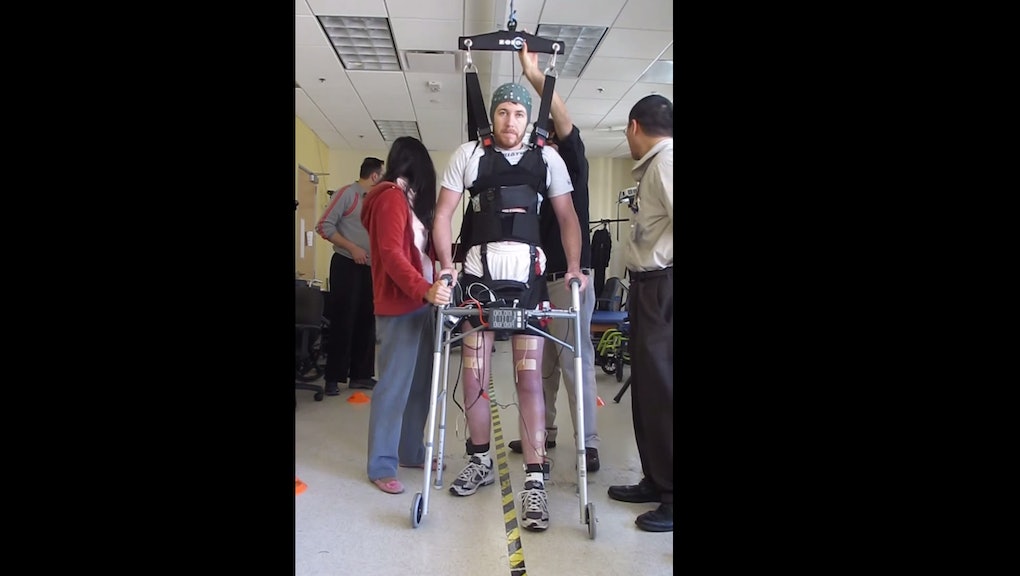 Scientists at the University of California, Irvine, have done something incredible: teach a paralyzed man how to walk again using a mind-machine interface. Adam Fritz, who suffered a debilitating spinal injury, was able to walk across a room after being trained to use the interface over the course of several months.

A video of Fritz was released in September, but we now know more about how the process works. According to a statement on the university's website, the encephalogram-based device measures electrical signals emitted by a person's brain and decodes them using a computer to isolate those related to movement. It then is capable of sending those signals to electrodes placed around the knee and triggering controllable muscle activity.

The scientists had to first reawaken the parts of Fritz's brain responsible for lower body movement by having him control a computer-generated avatar.

"It's a hard thing to do — to sit there and think of walking," Fritz told Tech Insider. "So instead of trying to get the guy to walk, I tried to walk. ... You have to think 'walk' and be able to focus on that and not your body."

"This proof-of-concept study demonstrates for the first time that restoring brain-controlled overground walking after paraplegia due to [spinal-cord injury] is feasible," the researchers wrote in the study, published in the Journal of Neuroengineering and Rehabilitation. "If this noninvasive system is successfully tested in population studies, the pursuit of permanent, invasive [brain-computer interface] walking prostheses may be justified."

"The participant initially operated the system while being completely suspended and subsequently translated this skill to an overground walking condition," they wrote in the study. "He achieved a high level of control and maintained this level of performance during a 19-week period."

UCI neurologist An Do told Mic via email the system is in its infancy and "currently only allows for two states of control: 1. Not walking or 2. Walking. It is not capable of controlling the full range of leg movements."

Do added future versions of the system may allow for sensations to be transmitted back to the user.

"At this point, artificial sensation is a feature that we wish to develop in the future to complement the current brain-computer interface system," Do wrote. "Currently, the subject only has control over the movement aspect. Due to his spinal cord injury, he cannot sense his legs and relies heavily on visualization of his legs and feet in order to maintain his balance. The future addition of artificial sensation may be helpful to improve balance as well as the overall operation of the system."

Mind-controlled prosthetics still require much work before they will be available for widespread public use, and according to Popular Mechanics, they're extremely expensive. Popular Mechanics reported one cutting-edge arm prosthetic being developed at Johns Hopkins University Applied Physics Lab runs up to $400,000 a prototype.

This article has been updated.