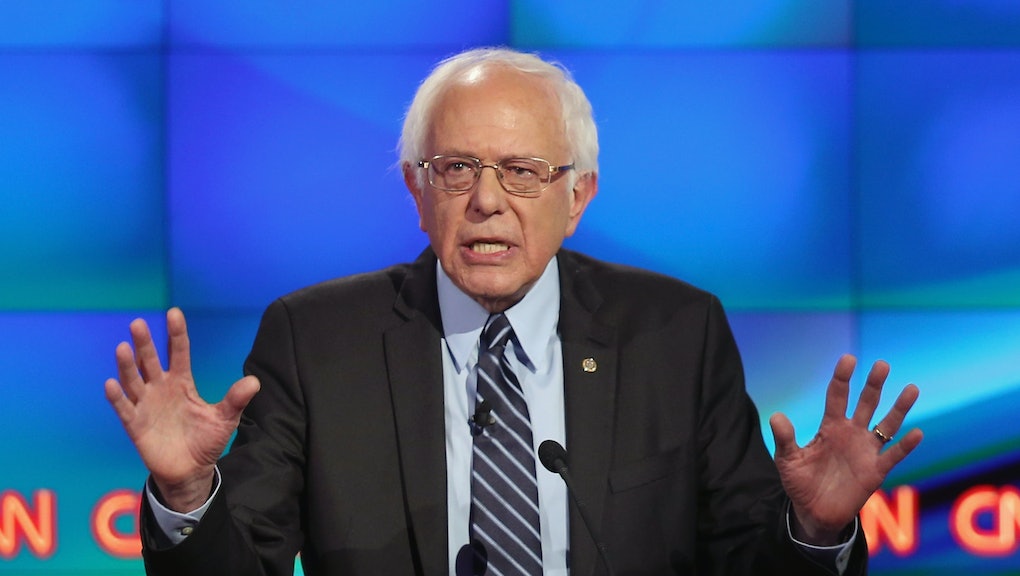 During Tuesday night's CNN Democratic primary presidential debate, Bernie Sanders was asked whether he considers himself a "capitalist." The Vermont senator, who has described himself as a "democratic socialist," explained he prefers not to define himself as a capitalist, as the term is commonly understood.

"Do I consider myself part of the casino capitalist process by which so few have so much and so many have so little by which Wall Street's greed and recklessness wrecked this economy?" Sanders said. "No, I don't. I believe in a society where all people do well. Not just a handful of billionaires."

Following the debate, Vox reported a rapid spike in searches on Merriam-Webster for the term "socialism." Articles like the Daily Kos' "Bernie Sanders is a democratic socialist, but what does that mean?" and International Business Times' "Is Bernie Sanders A Socialist? During Democratic Debate, Candidate Slams 'Casino Capitalist Process'" began popping up on Google, revealing most Americans are unfamiliar with the term Sanders uses to describe his liberal-leaning policies.

What exactly is a democratic socialist? According to the Democratic Socialists of America:

"Democratic socialists believe that both the economy and society should be run democratically — to meet public needs, not to make profits for a few. To achieve a more just society, many structures of our government and economy must be radically transformed through greater economic and social democracy so that ordinary Americans can participate in the many decisions that affect our lives."

Moreover, the organizations writes, "Democratic socialists do not want to create an all-powerful government bureaucracy. But we do not want big corporate bureaucracies to control our society either. Rather, we believe that social and economic decisions should be made by those whom they most affect."

While a capitalist believes a country's trade and economies should be controlled and maintained by private owners rather than the state, a democratic socialist would believe that policies should be implemented by government in order to restrict the private sector from deregulating their industries without any oversight.

As Sanders said Tuesday, "What democratic socialism is about is that it is immoral and wrong that the top one-tenth of 1% in this country own almost 90% — almost — own almost as much wealth as the bottom 90%. That it is wrong, today, in a rigged economy, that 57% of all new income is going to the top 1% ... Those are some of the principles that I believe in, and I think we should look to countries like Denmark, like Sweden and Norway, and learn from what they have accomplished for their working people."