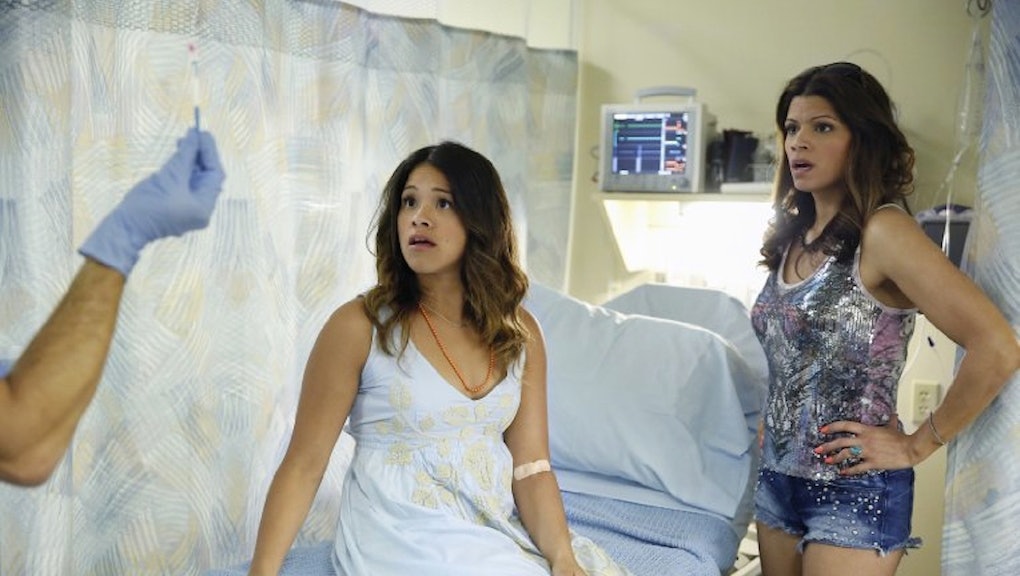 We've ditched most of history's outdated parenting prereqs. Thanks to the wonders of medical technology, you don't need to be married, in a heterosexual relationship or under the age of 40 to have a kid anymore. Now you might not need any previous sexual experience either. According to several fertility clinics in the United Kingdom, there's a surprising group to benefit from the technology of in-vitro fertilization: virgin women who desperately want to become pregnant.

The 21st-century "immaculate" conception: In a landscape where the majority of millennial women are delaying motherhood until their 30s, the handful of 20-something and 30-something virgin women who are trying to become moms might seem like reproductive anomalies. But the truth is that virgin mothers in 2015, while rare, are remarkably similar to other mothers who undergo IVF treatment — no mangers, no miracles and no Jane the Virgin-esque telenovela plot twists.

As a record number of women are using IVF to get pregnant, with 61,740 babies born using the technology in the US in 2012, an increasing number of single women are also undergoing IVF — without the guy, and, in some cases, without the sex.

Maha Ragunath, a medical director for the Care Fertility Clinic, has recently worked with three women who claimed they'd never had an "intimate relationship" of any kind, according to ABC News. "[It] was a personal choice," Ragunath told ABC News. "One was a career woman and was too busy and I don't think they've given themselves the opportunity to explore their sexuality. They were well-balanced and mentally prepared."

According to a piece in the Telegraph, there have been about 25 of these virgin births in the U.K. in the last five years at clinics such as Care Fertility. But virgin births have made it across the pond as well. Dr. Brooke Hodes-Wertz, assistant professor at the department of obstetrics and gynecology at New York University Langone's Fertility Center, told Mic that she occasionally sees single and virgin women in the center. According to Hodes-Wertz, fertility procedures are identical regardless of a patient's sexual experience, but extra care is taken with virgin moms, who have the option of a hymen removal procedure to increase comfort during vaginal ultrasounds.

So who are these women?: According to Ragunath, women who opt for virgin births tend to be straight women in their 20s who want kids, but just don't have a male partner in the equation. Sometimes they're students, working professionals or young women who are concerned with their ticking biological clocks.

"The majority have not 'chosen' to be a single parent but instead have chosen not to settle for the wrong relationship in order to become a parent," Tracey Sainsbury, a senior fertility counselor at the London Women's Clinic who has worked with a few virgin patients in her career, told Mic.

Apart from single ladies who just haven't found their match, Sainsbury told Mic that virgin women seeking IVF are also women in long-term relationships who want children but have endured sexual or relationship issues in the past. Other women may live with a physically limiting condition that prevents them from having sex with their partner for medical reasons — for example, vaginismus, a condition where the muscles painfully spasm around the vaginal opening.

Professor Geeta Nargund of Create Fertility estimates that she's seen about a dozen couples since 2010 who wanted a baby but hadn't been physically intimate, often due to a "physical or psycho-physical problem," she told the Daily Mail.

Divorcing sex from motherhood: The common reaction when people hear about virgin births is that the idea is really, really strange. That's because in our culture, we're used to marrying the concepts of heterosexual sex and pregnancy. We tell mothers to be pure and saintly, but when we hear of a sexually inexperienced woman becoming a mother, some find the concept freakish.

For some religious and conservative groups, the idea of a virgin mother goes against their core beliefs on parenting. "The ideal is that a child has a mother and a father who are married to each other," James Newcombe, the bishop of Carlisle, told the Daily Mail. "All the evidence shows that is the best context for a child." (Of course, the reality is that as of 2008, 41% of children were born to unwed mothers, indicating that the married-mom-dad model is well on its way out.)

The notion that sexuality and reproduction are somehow linked is outdated, according to Sue*, 46, a mother who is not a virgin but recently underwent in-vitro fertilization. "Why on earth would having sex — presumably with a man — make a woman a better mother?" Sue told Mic. "Certainly [virgin women] all had relationships with other human beings, first of all their own parents, and wouldn't that instruct their parenting skills more than having sex?"

Far from a single woman's "whim": While virgin births are still relatively rare, single-by-choice moms are only becoming more popular. About 10% of the treatment cycles conducted by the NYU Langone's Fertility Center are single parents using donor sperm, according to Hodes-Wertz.

"When we have surveyed women who underwent egg freeze cycles with us, 88% of them said they had not had a child earlier due to lack of partner, which I believe is the biggest reason," Hodes-Wertz told Mic. "This allows women to eventually become mothers who haven't met someone yet or the timing isn't right for them. [It] has really opened doors for these women."

Contrary to the beliefs of far-right or religious organizations, single and virgin women seeking IVF don't just walk into clinics on a whim without thinking of themselves and the impact of the decision on their child. The London Women's Clinic, NYU Langone's Fertility Center and Create Fertility all provide counseling and emotional support to single and virgin women before they start IVF.

"If patients use donor gametes like sperm they are required to meet with the psychologist for an educational donor gamete consultation," Hodes-Wertz said. Sainsbury added: "For women who have sexual problems that they believe prevents them from engaging in a relationship, then specialist counseling is available to enable them to explore their sexual wellbeing."

Additionally, IVF treatment is prohibitively expensive — about $12,000 per cycle —  and the U.K.'s National Health Service and most American insurance companies will not cover cases in which women have not been trying to conceive on their own for at least two years. The single or virgin women seeking IVF are likely managing the costs of treatment on their own — which means that contrary to what conservative family advocates say, they ostensibly have a true, deep desire to bring a child into the world.

In fact, the evidence that healthy children are born outside of the traditional married model is so overwhelming that as of 2013, the Ethics Committee of the American Society for Reproductive Medicine found that a patient's relationship status or sexual orientation could in no way restrict their access to fertility treatment — meaning that a virgin mom or single woman is just as equipped to have a kid as a woman who's had sexual partners.

What it really means to be a mother: Above all, the truth of "virgin motherhood" is that it throws all the tired notions of who can and can't be a mother out the window. Today we no longer accept a one-dimensional look at virginity as solely how women relate to men sexually, and motherhood shouldn't have that limitation either.

"We no longer judge women making decisions about raising a child where the father does not play an active role," Sainsbury said. "Why is it an issue to accept [virgin] women who wish to parent, who have acknowledged the implications of their decisions?"

As the millennial generation largely pulls away from parenthood, it's simultaneously embracing the larger spectrum of what kind of person can become a parent. Women who choose virgin births are asserting their reproductive agency and changing the face of who gets to be a mother. That means anyone, from the career-driven straight singleton or the loving lesbian couple to the asexual woman or the married woman with vaginismus who can't enjoy sex with a partner, has the opportunity to become a mom.