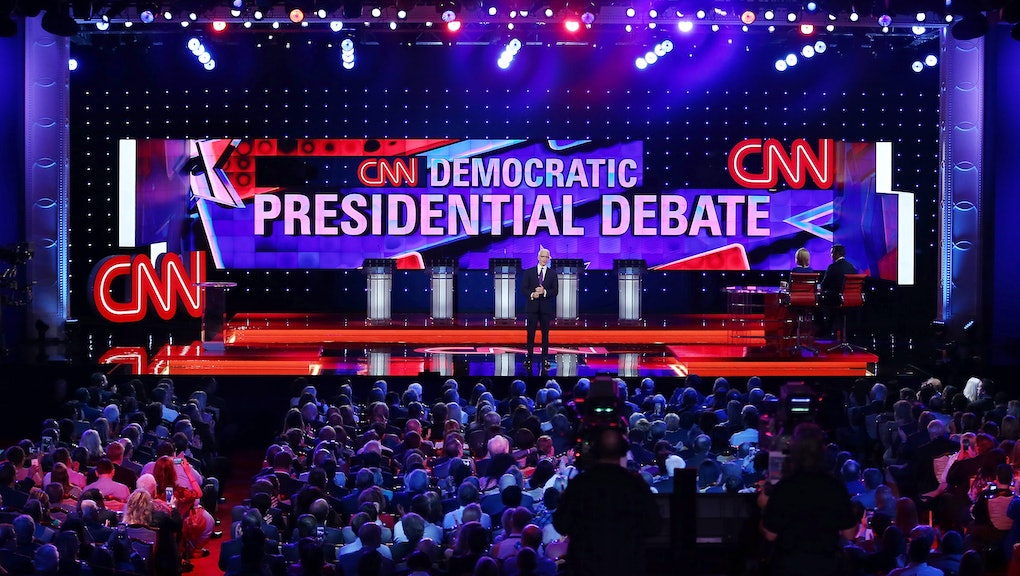 "Black Lives Matter" has evolved from a hashtag to a mandate.

At the first Democratic presidential debate Tuesday night, it was evident that the phrase — which rose to prominence last year as a Twitter slogan for organizers protesting police brutality — has emerged as a litmus test for any candidate who considers themselves to be a champion for progressive causes.

The crowd burst into applause.

"The reason those words matter is the African-American community knows that on any given day, some innocent person like Sandra Bland can get into a car and then three days later she's going to end up dead in jail, or their kids are going to get shot," Sanders continued. "We need to combat institutional racism from top to bottom, and we need major, major reforms in a broken criminal justice system in which we have more people in jail than China."

Sanders said the problem required moving beyond attention to policing.

"I intend to tackle that issue, to make sure that our people have education and jobs rather than jail cells," he said.

When prompted by moderator Anderson Cooper to answer the question, former Maryland Gov. Martin O'Malley expressed solidarity with the phrase.

"The point that the Black Lives Matter movement is making is a very, very legitimate and serious point, and that is that as a nation we have undervalued the lives of black lives, people of color," O'Malley said. "Black lives matter, and we have a lot of work to do to reform our criminal justice system and to address race relations in our country."

O'Malley said the movement was only reasonable given the kinds of violence the black community has faced for years.

"When I ran for mayor of Baltimore — and we were burying over 350 young men every single year, mostly young, and poor, and black — I said to our legislature, at the time when I appeared in front of them as a mayor, that if we were burying white, young, poor men in these numbers we would be marching in the streets and there would be a different reaction," he said.

Cooper changed the question before it came before Clinton — who has publicly embraced the term "Black Lives Matter" in the past — asking, "What would you do for African-Americans in this country that President Obama couldn't?"

But Clinton brought the issue back to many of themes Black Lives Matter activists have been agitating for since last year, and said "we need to tackle mass incarceration."

"What we need to be doing is not only reforming criminal justice — I have talked about that at some length, including things like body cameras, but we also need to be following the recommendations of the commissioner that President Obama impaneled on policing," Clinton said. "But, I believe that the debate, and the discussion has to go further... We need a new New Deal for communities of color."

Why it matters: Earlier this year, the willingness of the candidates to align themselves with the movement was not self-evident.

Over the summer, Sanders faced two public disruptions from Black Lives Matter activists pressuring him to focus more on the issue of criminal justice reform. Sanders responded by hiring a black press secretary to help him with policy and messaging and giving the issue significantly more attention in his campaign, a shift that was plain in his opening address during the debate, in which he made criminal justice reform a priority. When Sanders launched his campaign in May, he made no mention of the issue at all.

O'Malley was also disrupted earlier this year at a conference, and angered reform advocates at the time by answering the question posed to him at the debate a bit differently: "Black lives matter. White lives matter. All lives matter." He later apologized.

Clinton has always been the most nimble Democratic candidate on the issue, vowing to end mass incarceration in her first policy speech of the year, and also enjoying the benefits of a massive security detail that have insulated her from disruptions. She has communicated sympathy with the movement in controlled settings, including an intimate meeting with a group of activists that was recorded and eventually released by activists. It was an interaction that captured her openness to grassroots pressure, and portrayed her in a generally positive light to progressives.

The response: Some Black Lives Matter activists were encouraged by the tone of the debate, especially Sanders' vigor on the issue.

"Sanders brings a straightforward approach to discussing issues about race and inequity," DeRay Mckesson, an influential member of the Black Lives Matter movement, told Mic. "He clearly noted that we need to address systemic inequality and mass incarceration and highlighted the disparate impact these have on black and brown lives."

But Mckesson wished the candidates had gotten into more detail.

"I'd hoped that all of the candidates would have discussed race and criminal justice more than they did," he said.

Other advocates agreed the themes of the debate were right, but more specifics are needed to advance the debate.

"We were encouraged to hear the two front-runners for the Democratic nomination specifically address criminal justice reform on the stage tonight," Jenna Moll, deputy director of the U.S. Justice Action Network, a bipartisan organization bringing together groups like FreedomWorks and the American Civil Liberties Union, told Mic. "We want to hear from them exactly which parts of the criminal code they would reform that would have an impact on the prison population — a good answer would include direct sentencing changes and access to rehabilitation programs instead of incarceration and a stronger community supervision system."

Indeed, the devil is in the details. The energy with which the most prominent candidates of the Democratic Party supported the idea of reversing mass incarceration and improving policing marks a victory for Black Lives Matter. But a theme is not the same as a commitment — and there's still quite a ways to go to get the candidates to pledge to take all of the massive steps needed to actually change the conditions that led to the crisis in the first place.