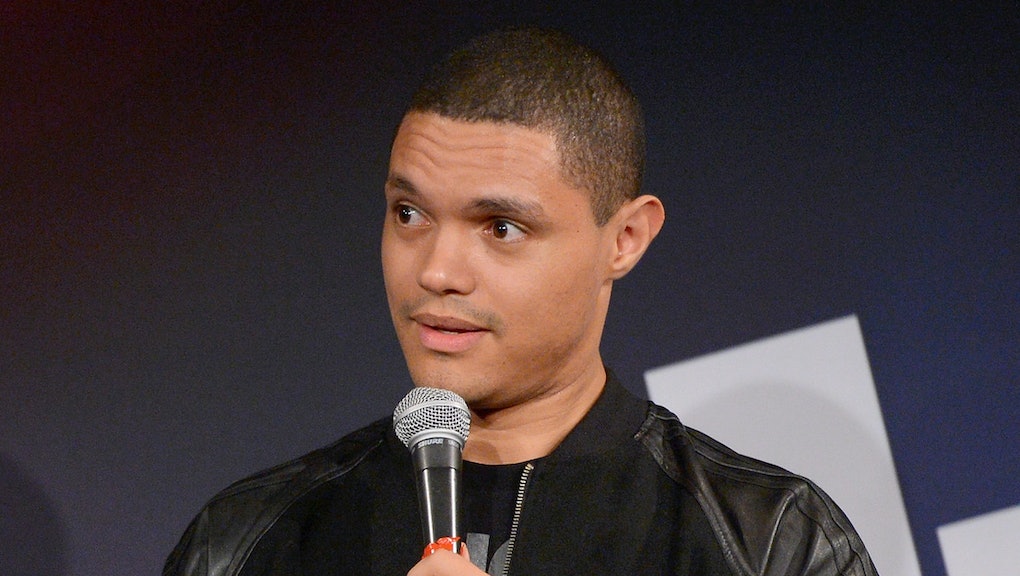 Not even a month has passed in Trevor Noah's Daily Show tenure, but controversy is already starting to brew. The accusation this time is one of joke theft — a joke that came from fellow comedian Dave Chappelle.

As first noted by the Hollywood Reporter, Noah told a joke about being a "racism connoisseur" — that he appreciates a "finer racism" having experienced it elsewhere before coming to the United States. The joke came during his stand-up set at Politicon, a new convention in Los Angeles about the intersection of politics and culture. The audio of the joke can be heard below.

"Before I came here, blatant racism was my favorite," Noah says. "Blatant racism, where you know exactly where you stand, often perpetrated by old people, which I have always appreciated. They'll just tell it to you like it is. 'This is what I think about you!' Yeah, you're going to die soon."

The joke is remarkably similar to one Chappelle told back in 1997. Not only did the comedian use the exact phrase "racism connoisseur," he also talked about the merits of racism that's "out in the open."

"Anyone ever been down South?" Chappelle asks in his bit (it starts about a minute into the video above). "So you guys know what I'm talking about. The racism down there is just fucking — it's perfect. Stewed to a perfection. It's comfortable, it's out in the open. There are no secrets in Mississippi."

The jokes may be 18 years apart, but Noah's phrasing is basically a mirror of Chappelle's, right down to including a friendly greeting matched with the word "nigger" (Noah's "Good afternoon!" to Chappelle's "Morning!").

This isn't the first time Noah's been accused of joke plagiarism. After Noah was announced as the new host of The Daily Show, comedian Russell Peters accused him of being a "thief" in a video interview on Channel NewsAsia.

Joke theft has been a hot topic this year, with online comedians like Josh Ostrovsky, also known as the Fat Jew, coming under fire for stealing material. Certainly in comedy, there are habits of riffing or inspiration — one comedian tells a joke, another comedian builds on that, etc. Joke theft, however, is usually more blatant.

Noah himself has been something of a controversial pick for the Daily Show seat from the start, and not just for potential lifting of material. He found himself in a Twitter storm after several users dredged up old, offensive jokes of his on the platform right after his announcement as Jon Stewart's replacement. He's since called himself "an idiot" for those jokes.

Noah and Comedy Central did not comment on the accusations to the Hollywood Reporter. He's scheduled to appear on Wednesday night's Daily Show as usual, where his guest will be actor Tom Hiddleston.