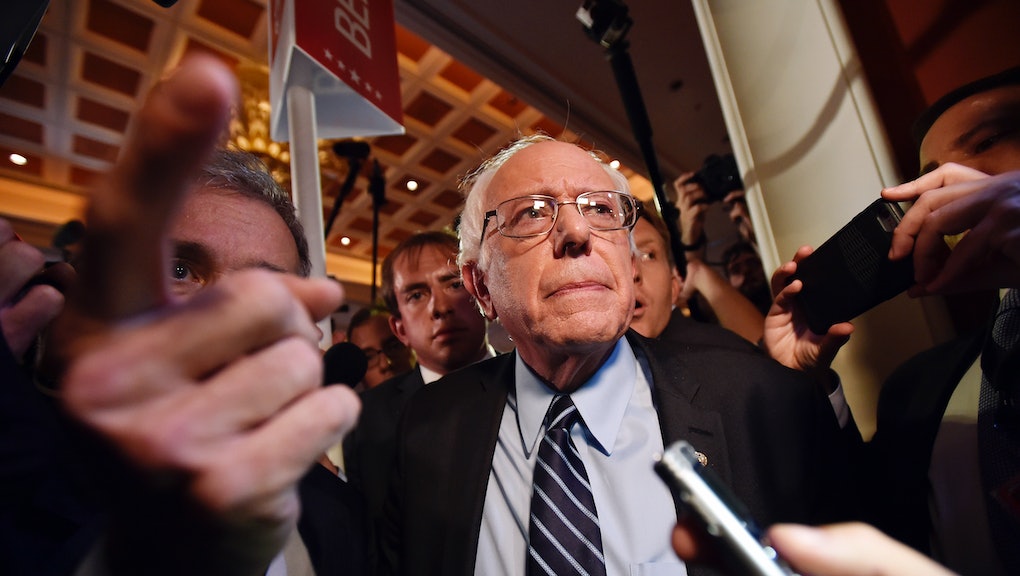 After the Debate, Bernie Sanders Helped Save MSNBC's Andrea Mitchell From a Reporter Crush

In the aftermath of the Democratic Party's first presidential debate Tuesday, Sen. Bernie Sanders (I-Vt.) again stole the show from his rivals with the dramatic rescue of MSNBC reporter Andrea Mitchell.

Mitchell, along with the rest of the press pool, tried to catch a post-debate quip from the candidate who routinely draws crowds of tens of thousands wherever he goes.

At some point, Mitchell lost her footing and briefly appeared in danger of being trampled.

"All right! You know, excuse me! Please move back!" Sanders scolded the press "Will the cameras slow it down?"

"Are you all right?" he asked Mitchell several times; she responded that she was. "That was a dangerous situation." she said. " I apologize."

The scrum of media generated by Sanders attests to his newfound power in the presidential race as the most credible threat to the front-runner, former Secretary of State Hillary Clinton.

The incident was a bizarre denouement to what many said was a solid debate performance by Sanders. While on stage, the septuagenarian socialist zinged off the night's most memorable line when he told Clinton the public was "sick and tired of hearing about your damn emails." The exchange prompted a wide grin from Clinton and a handshake.

The Democratic candidates will meet for their next debate Nov. 14 at Drake University in Des Moines, Iowa.