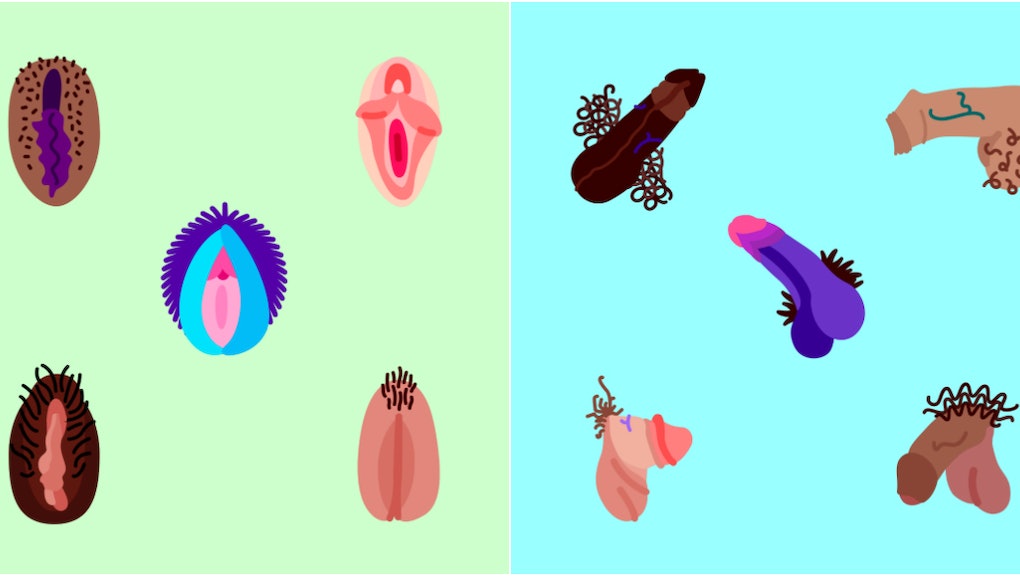 These Are the Cute, Sex-Positive Penis and Vagina Emojis We've Been Waiting For

It's an age-old question: How is one supposed to best convey genitalia through emoji?

Dick lovers have the eggplant (and/or banana, if you're a traditionalist). Ass enthusiasts can bust out a cute li'l peach emoji. Boob lover? Apple has a pair of melons with your name on it! Yet despite these many means of sexual expression through texting, the V has remained criminally underrepresented in the emoji canon.

Instead of reducing the majestic female flower to a symbolic/SFW fruit, the emoji design company Flirtmoji opted to create its own colorful, anatomically accurate vagina emojis. The result is a veritable vag-moji buffet, with a number of diverse models to choose from.

One will immediately notice that these vulvas are not ashamed of being vulvas. They are strong. They are proud. They are sometimes hairy. They each have a personality, a soul, a voice. And unlike Apple's original emojis, they're also diverse, both in terms of racial representation and in the different types of vulvas depicted.

"We love that each labia has its own unique set of folds and curves," Flirtmoji co-artist Katy McCarthy told Mic. "The mission is to show a wide range of genitals in a number of colors, from a number of perspectives, with attention to details like hair, piercings, scars, veins, etc."

And for the gentlemen, never fear: Flirtmoji hasn't forgotten your special snowflake wieners. On Friday the company also released a set of equally diverse and vibrant peen-mojis, featuring dicks of all shapes, colors and sizes. "Our goal isn't to normalize as much as to celebrate the glorious idiosyncrasies of a penis or a vulva," McCarthy said.

The company launched last year, after its founders were "inspired by the amount of sexting and texting and genital-pic messaging we saw happening in our community of 20-somethings in the east Bay Area in California," McCarthy told Mic.

"We also generally observed that tons of people the world over were using their phones prolifically for sexual communication," she added. "Seeing all this, Flirtmoji blossomed out of a desire to build a sex-based visual language that was inclusive, diverse, funny and functional."

That said, some people are taking issue with the emojis — though not for the reason you'd think. On Friday, the Verge reported that Indiana artist Erin Tobey claimed that some of the vulvas were remarkably similar to some Vs she drew a few years ago as part of another project.

At first, Flirtmoji told the Verge that the similarities were purely coincidental, as there are only so many shapes a vulva can take. But in a recent blog post, the company acknowledged her concerns and apologized for accidentally copying at least two of her emoji (the top left and middle left in the below graphic, for those keeping score at home). "In those two emoji, Flirtmoji plagiarized Erin's beautiful work," Flirtmoji wrote before promising to take the emojis down. "We're tremendously sorry, embarrassed, and humbled by this."

Artistic attribution issues aside, the basic premise of both Tobey's and Flirtmoji's emojis may actually be able to do quite a bit of good. Considering how stigmatized and misunderstood penises and vaginas are, this kind of in-your-face visibility can be immensely valuable in teaching people to feel more comfortable talking about sex.

"We realize these are condom vectors and dick doodles, but it's also an earnest attempt to visualize the entire spectrum of safe and consensual sex to better encourage open and healthy communication about important issues," McCarthy told Mic. "So it's a little thing and a big thing."

The fact that there are so many diverse options for vaginas in particular helps to underscore an important point: even though women feel immense pressure to have the "perfect" vagina, with many spending thousands of dollars on labiaplasty surgeries to get their lady bits altered, all vadges are uniquely beautiful in their own way. (Peens aren't exempt from such aesthetic judgments, either: Dick-ranking is a practice as old as time, with many a study conducted in an effort to determine what makes a penis more or less appealing.)

Emoji designers aren't the only ones who are trying to bring vagina positivity to the forefront. Earlier this year, for instance, a pair of young women sought to similarly de-stigmatize the yoni by launching a controversial Instagram account called Look at This Pussy, which featured various pics of, well, things that looked like pussies.

"Normalization is absolutely a focus," LATP co-founder Chelsea Jones previously told Mic. "The female body is fetishized beyond any kind of reality. By choosing yonic objects, it's a way to seize representation, take back what's ours."

Even though the idea of a "perfect" penis or vagina is patently ridiculous, we're still self-conscious about our junk. Controversy aside, these delightfully silly, sex-positive emojis prove that no matter what our genitals look like, someone else will find them beautiful — and that's an idea worth celebrating.