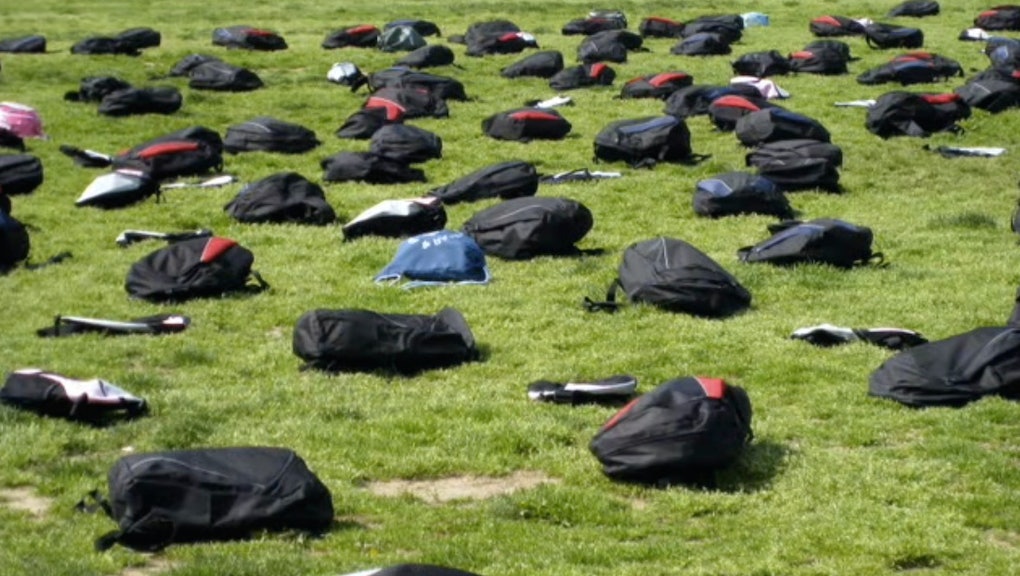 To raise awareness for suicide rates on college campuses in the United States, Active Minds, a nonprofit organization dedicated to raising mental health awareness, is placing empty backpacks on school grounds across the country. The traveling installation, titled Send Silence Packing, displays 1,100 backpacks in total, a figure that reflects its estimate of the number of college suicides in America each year.

"The program is designed to raise awareness about the incidence and impact of suicide, connect students to needed mental health resources, and inspire action for suicide prevention," Active Minds explains in the Send Silence Packing mission statement. "At each exhibit of Send Silence Packing 1,100 backpacks are displayed in a high-traffic area of campus (like the campus quad), giving a visual representation of the scope of the problem and the number of victims."

Suicide rates in the United States rose steadily between 2000 and 2013, from 10.43 per 100,000 Americans to 13.02, according to data from the Suicide Prevention Resource Center, which also noted men are four times more likely to die by suicide than women. The data also suggest that as suicide rates rose during that period, homicide rates trended down, reaching about 5.1 in 2013.

The problem is particularly acute for Americans aged 15 to 24 and 25 to 34. In both age groups, suicide ranked as the second-leading cause of death between 2000 and 2013, right below death by unintentional injury.

Family and friends of the young men and women that have died by suicide provide Active Minds with photos and narratives, which the organization affixes to each empty backpack. That helps sharpen the reality of suicide for the exhibit's audience, according to one Northwestern freshman, Christian Ubillius, who attended the display.

"You get to see the stories and the type of representation of how real it is, of how real suicide at our age or even younger is," Ubillius told USA Today College.

Send Silence Packing has visited more than 98 cities since its inaugural exhibition on the National Mall in Washington, D.C., in 2008. Active Minds sends the traveling exhibit on tour twice a year, and is currently accepting interest forms for the spring 2016 tour, which will be regionalized to Southern and Southwestern states.