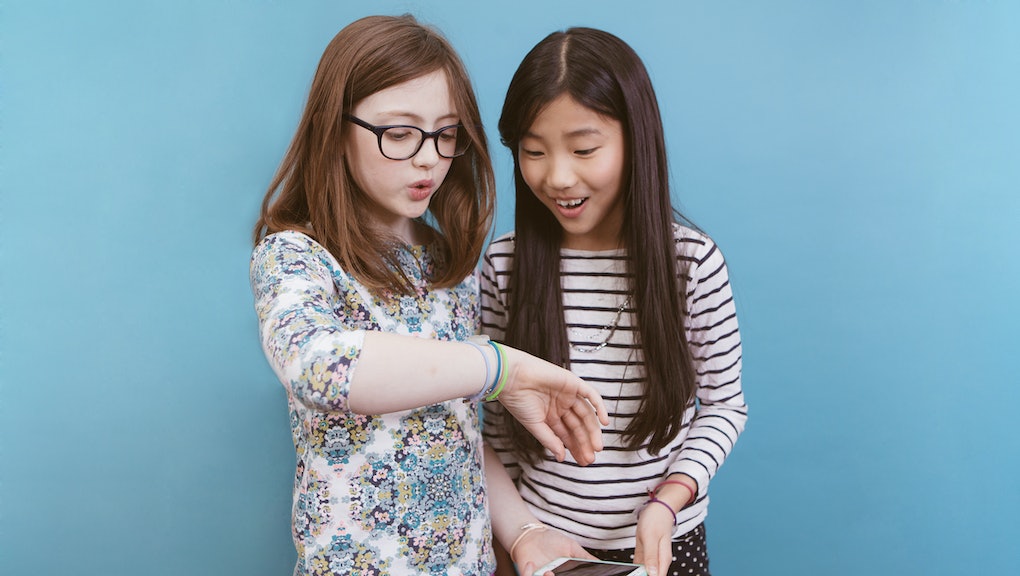 In the olden days, when we weren't too busy predicting our futures with MASH and creating cootie catchers, we made friendship bracelets out of multicolored string. At camp or during recess, you'd sit down and braid thread after thread into a design all your friends had agreed upon.

Those friendship bracelets didn't have LED lights. They weren't battery-operated. And they definitely didn't have Bluetooth.

What tweens today have is way cooler.

A 21st-century upgrade: Meet Gemio and Jewelbots, two tech companies that want to shine a light on modern friendships by upgrading an accessory that has been around for decades.

The innovation: a tech-infused bracelet with communicative technology, so that the bracelet on one wearer's arm connects to the other nearby bracelets.

Both work via Bluetooth, so the bracelets recognize one another without any need for phones or computers. Jewelbots are made with a simple battery, motor, four LED lights and a Bluetooth hookup. The bracelets can vibrate or light up in different colors when friends are nearby. They can also be programmed to send "messages" via special vibrations.

Gemio works similarly, with an added bonus of interchangeable gems featuring alternating lights that can be programmed to glow in patterns. Gemio also works through motion technology, lighting up based on gestures like secret handshakes.

For Jewelbots, customizing the bracelet's actions are the point: The product was created as a way to get girls excited about coding.

"My co-founder Sara [Chipps] started playing with hardware and wanted to create something that could get girls excited about making computers like [the video game] Minecraft, which kids don't use for the code, but because it's fun," co-founder Brooke Moreland told Mic. "We don't want to think of it necessarily as an educational tool, but we do want to expose them to this."

Wearers can write additional code to make the bracelets act in more complex ways, like buzzing whenever their parents (who would also need a Jewelbot) are around, or flashing green when near one of their best friends. Gemio's app, which is available on iOs devices, allows the user to customize the light effects and the animation effects on the gems.

Making wearables prettier: The very fact of these similar innovations points to a couple of modern realities. One is that wearables, while increasingly ubiquitous, aren't always finding an audience that wants or needs the product. (Hello, Apple Watch), or they aren't made with a recognition of the human relationships we already have.

The alternative are wearables that do serve a function but aren't exactly pretty. "Why is wearable technology so damn ugly?" fashion business reporter Rachel Arthur asked in the Telegraph in 2014.

"The aesthetic evolution of wearables has to happen," Gemio CEO Michael Bettua told Mic. "We all refused to do yet another rubber-looking band that's out there, so we designed [Gemio] with a more jewelry aspect to it. The idea of personalizing it is where it has to go to."

Capturing the essence of girl friendship: Upping the prettiness as well as the personalization is a clear sign the makers of these bracelets — both of which are taking preorders online with plants to ship in the spring — were paying attention to girls.

In Gemio's initial quest to reinvent friendship, Bettua noticed in focus groups that all young people were attracted to the idea of expressing themselves through this accessory, "the way they express themselves on Instagram." They wanted personalization and they wanted a new way to connect, Bettua said.

"What made [friendship bracelets] so enduring for so long was the creative elements of it," Bettua told Mic. "That kids are designing it for themselves and their friends, and sharing of the bracelets."

"The younger girls tend to get most excited about being able to change the look of the bracelet," he added. "For the older girls, they've got the communication elements as well. Between both groups, what we found is equally popular is designing designs for their friends. It's a sign of how much they know each other."

That's why, contrary to some cynics' takes on a digital friendship bracelets, Bettua and Moreland insist that the bracelets don't negate in-person interactions or weaken friendships, but rather strengthen them.

According to Jewelbots' Moreland, that allows young girls to communicate in a more intimate, private manner, not unlike stealthy note-passing did years ago.

"You like sharing a close bond to your friends but it's about next-level communications," Moreland said. "For young middle school girls, messaging is really important to them. They can be secretive with three vibrations meaning something to them, and nobody can look on. They have secret words that mean secret things."

Which is, at the heart of it, what so many girls — and adults — want: a way to connect with each other, form bonds and establish a mode of connecting that's theirs alone.

"Thinking about friendships and what represents us today, friendship bracelets have been the most enduring, wearable history," Bettua said. "They've always been created by young people and they've been given as gifts, and they're very symbolic."

That's more than the Apple Watch can say.