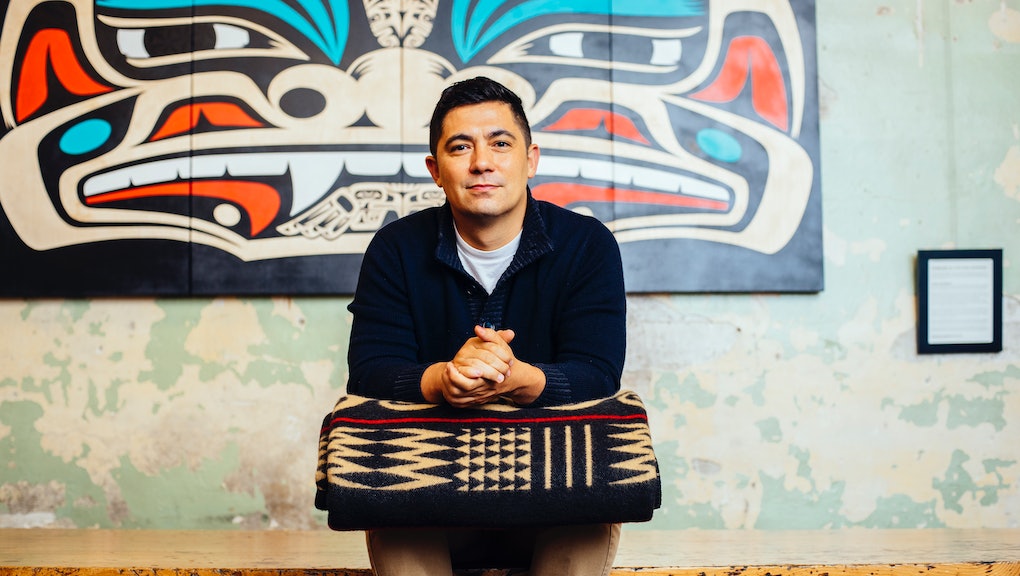 Louie Gong didn't have much growing up. The house in Ruskin, British Columbia, where he lived with his grandparents had no running water and a facade that bore the wear and tear of the soggy northwestern elements.

When his family moved to the Nooksack Indian Reservation near Whatcom County, Washington, when he was 10, conditions were only slightly better. "When you grow up poor, you have to be creative," the 41-year-old told Mic Tuesday. "If your toys are the sticks and rocks lying on the ground, you learn to connect the dots that aren't being connected for you."

Today Gong sits in his own office, a modest 1,100-square-feet cement warehouse in Seattle less than two hours south of his childhood home by car. He is the founder and CEO of Eighth Generation, a company he describes as "a Native-owned, community-engaged small business that began when I started putting cultural art on shoes."

The company's evolution was unique. In 2008, Gong began decorating sneakers and skateboarding apparel with indigenous Nooksack patterns — a move that, as a Nooksack himself, set him apart from the non-Native designers who'd been doing so for years. As demand grew, so did Gong's ambition. By the end of the year, he had officially founded his company, which is now expanding from apparel and accessories into home decor and functional appliances.

Its latest campaign involves what Gong has billed as the first line of wool blankets produced by a Native-owned company. "The goal is to create accessibly priced products that people are going to use," he said. "Our ancestors have always applied art to things that were utilitarian — bowls, spoons, doors, moccasins. I want to use my art in the same way."

To date, Gong is Eighth Generation's only full-time employee. He hopes to add one more by Christmas, but for the past seven years he's been aided by a network of part-time workers, artists and family, about 60% of whom, he estimates, are also indigenous people.

This is significant at a time when Native American artisans find themselves at an exciting crossroads. After generations of selling their wares piecemeal — and watching art native to their ancestors being picked apart, stripped of context and remixed haphazardly by pattern-hungry designers worldwide — a small movement of entrepreneurs is working to redefine the relationship between consumers and Native craftspeople.

Their goal is bigger than to merely produce and sell Native American-made products at a larger scale. They've also married their business ambitions to a social mission — one intended to uplift fellow Native designers and put the power of commerce back in the hands of the producers.

"As we push forward, we're doing our best to build the capacity of other artists, and create other opportunities for people in our communities at the same time," Gong said. "That notion of community was instilled in me by my grandparents, and it's something I'm trying to carry forward."

This philosophy is apparent in Gong's community work today. He spearheaded the Inspired Natives Project, an initiative that provides indigenous designers with the tools to produce, market and sell their work more broadly. Gong has also contributed art, gifts and designs that bolster the efforts of local partners like Chief Seattle Club, which provides services for Seattle's homeless indigenous community, and last year's successful campaign to change Columbus Day to Indigenous People's Day in the city.

When asked if his community work and tendency to donate his art might hamper the growth of his business, Gong replied, "The key to sustainability is balance. I do see how emphasizing community work at this point could undermine the growth of a business. But if I want to build the business I want to see, that work is something that needs to be a part of it."

In this way, his model constantly has one eye toward the future. The name Eighth Generation itself, Gong said, is a play on the Seventh Generation principle, which is attributed to multiple tribes, especially ones from what is now central New York. The principle states that we should make our decisions rooted not just in our own self-interest, but on behalf of the seven generations to follow, so that they too may enjoy our bounties.

Gong's business also has a clear endgame: survival. And it applies to Native art as much as it does to Native culture as a whole — a truth that Gong and his contemporaries see all too vividly. "If we continue buying and selling products that use Native designs but don't support Native artists, we're perpetuating cultural appropriation," he said. "Cultural art is like any natural resource. If we don't put back into the environment that's sustaining that resource, we end up killing it."

It's an outcome Gong is unwilling to let take shape, and Eighth Generation is his way of ensuring it doesn't.