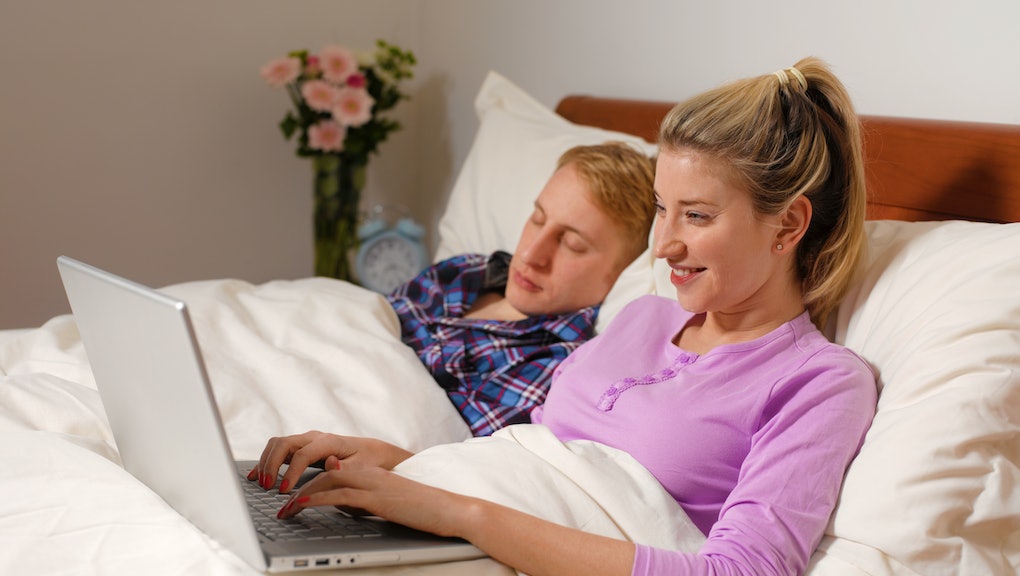 Today in Internet garbage, one male Reddit user has revealed the secret to keeping the sexual spark alive in his marriage: manipulation and lies!

In a thread that quickly went viral on Wednesday, (web)master of deception jazz_man told his fellow Reddit brethren he has his "router's setup page as a quick-launch icon on [his] phone" to allow him to easily flip the parental controls on his WiFi on or off — and give him a better chance to access his wife's otherwise off-limits vagina.

Here's his declaration in meme form, originally posted in /r/AdviceAnimals:

Given this tragic confession surfaced on Reddit, a web forum that's not exactly known for being a bastion of veracity, it's best to take the meme with a grain of salt. But that sad little bear meme has garnered more than 4,500 up-votes since going live Wednesday morning, suggesting jazz_man isn't the only dude out there who claims to have been cock-blocked by his wife's Internet addiction.

"Seconded," one user replied, referring to their own spouse. "She's [sic] be standing over my shoulder, staring daggers into the back of my head until she was able to play Candy Crush or Gems or whatever freaking game she's currently addicted to."

Another chimed in to say that they just can't figure out how to hack into their wife's mainframe, both literally and figuratively. "This doesn't work in my house," they wrote. "My wife just uses her mobile data."

Assuming these users are actually resorting to such childish tactics, there's an obvious point to be made here: If you want to get your pole waxed so bad, you should probably learn how to speak up about your sexual desires and communicate with your partner without all the "LOL now that there's no Internet, you have no choice but to S my D" subterfuge. Also, you should maybe look into viewing your wife as a human being with her own sexual agency, instead of a vagina attached to an iPad (which is actually a thing, by the way).

That said, it's hard not to have a tiny kernel of sympathy for these people. There's something to be said for how common smartphone addiction is, even when it's at the expense of having sex: In fact, a 2013 survey suggested more than 25% of people in Great Britain would rather forgo sex for a month than give up their mobile phones.

There's a word for this type of cell phone separation anxiety: It's called nomophobia, and according to a 2012 study nearly 66% of people are affected by it. Nomophobia is generally marked by feelings of fear or anxiety when separated from a smartphone.

It doesn't take a genius to figure out the constant impulse to be plugged in can have a negative effect on our IRL relationships, not to mention our sex lives. (Artist Saint Hoax slyly commented on this phenomenon last month when he depicted classic Disney couples ignoring each other to stare into the abysses of their iPhones.) But even if these Redditors do have particularly nomophobic wives, screwing with the Internet connection is a shady workaround to a much larger problem. And if these women are not, in fact, nomophobic, the Redditors might benefit from asking themselves why their wives don't want to have sex with them in the first place.