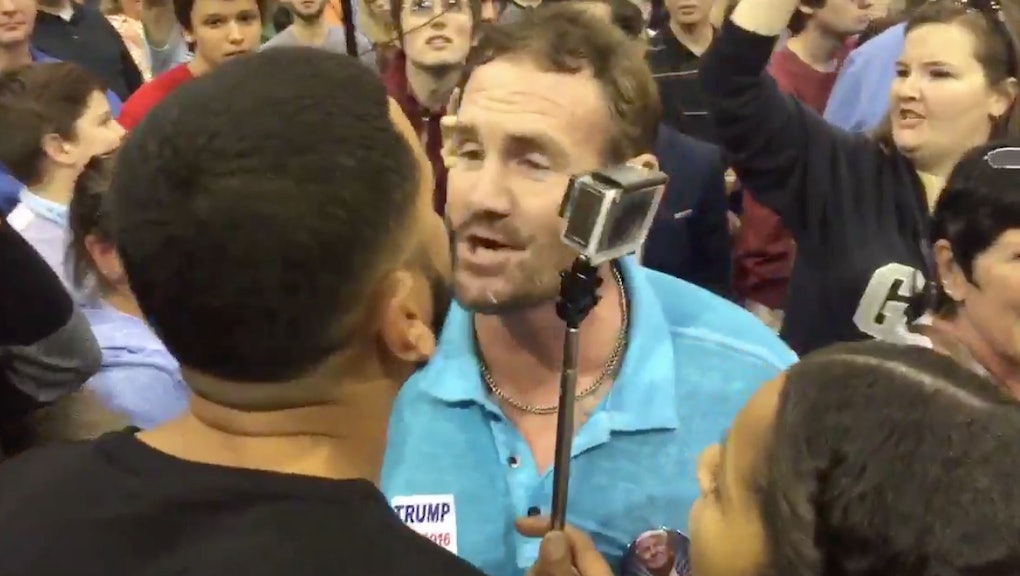 A Donald Trump rally in Richmond, Virginia, turned ugly on Wednesday after a number of clashes erupted between campaign supporters and protestors on the scene.

Footage captured by WUSA9 reporter Garrett Haake showed one man repeatedly screaming "fuck you" at a Trump protester before spitting in his face. The spitter was then gently pulled back toward fellow Trump voters.

It was the most sensational moment captured at the rally in which roughly 20 protesters, some students from Virginia Commonwealth University, came to the event to make their voices heard.

Though there was only one documented spitting, it didn't take long for Trump supporters to became enraged at the presence of protesters and respond with cries of "go back to where you came from," CNN reported. According to local media, another woman became violent when a protester identified herself.

In stark contrast to the treatment afforded the spitting man, Virginia state police brusquely removed the protesters from Trump's event, footage of which was documented in another video.

"It's just outright racism repeatedly from Donald Trump, and we just came to be like we don't support that," one protester, Jasmine Fears, told local media after she was escorted from the event. Fears herself was unable to complete her interview before an officer told her she was not even welcome in the parking lot.

It's not the first time the Republican presidential front-runner's supporters have stolen the show — often violently.

In August, two Boston men beat and urinated on a homeless man, telling police they had been inspired by Trump. "Donald Trump was right," the men said, CNN reported. "All these illegals need to be deported."

In another instance, a Trump supporter ripped up a protester's sign that read, "Our lives begin to end the day we become silent about the things that matter."

The candidate himself has also often exercised uncharacteristic restraint when dealing with his fans, as with this case when a supporter in New Hampshire called Muslims in the United States a "problem" and accused the president of being one. "I lot of people are saying that," Trump said. "We're going to be looking at that and plenty of other things."

So far, however, the controversies have only enhanced the billionaire's candidacy. Despite recent gains by rivals, most notably Dr. Ben Carson, Trump continues to lead the field, with the latest numbers from South Carolina and Nevada showing the real estate magnate dominating the competition.