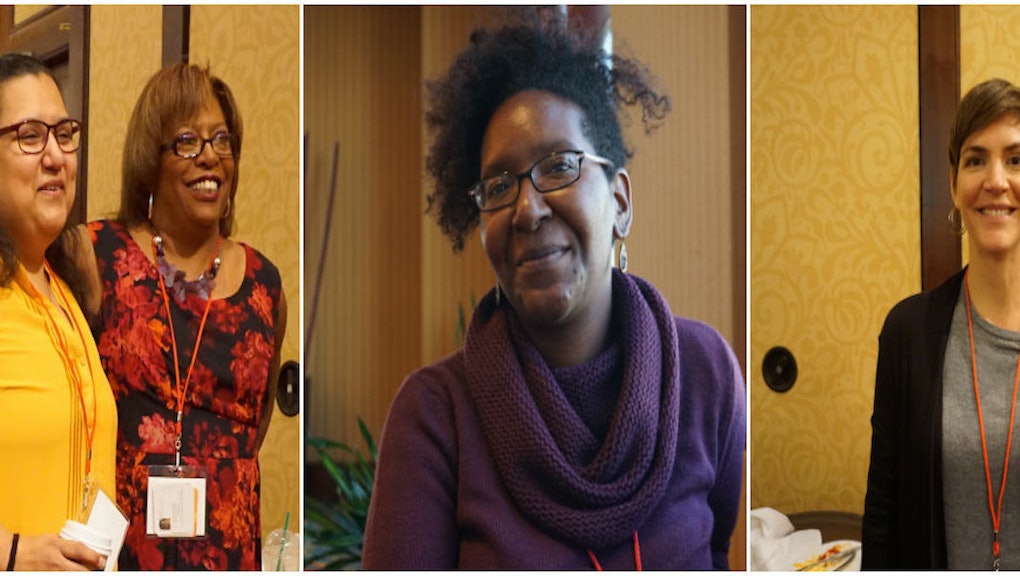 Not all women become mothers. This might sound obvious, especially in an era when the number of adult females who don't have kids is higher than ever. But it's a message that bears repeating, especially since our culture usually treats parenthood as a foregone conclusion — especially for women.

Despite the fact that there are myriad reasons a woman might not want to become a parent or might not be able to conceive, we continue to interrogate the childfree about why they don't have kids, even though these questions are invasive and potentially deeply hurtful. Not having children for whatever reason is so stigmatized, childfree women often feel the need to carve out safe spaces for themselves, where they can connect with those whose lives are similar to their own, without questions or judgment.

The Not Mom Summit, a conference of women who are childfree "by choice or by chance," is one of those spaces. Mic recently attended the first-ever Not Mom Summit, held in Cleveland earlier this month, and spoke with women who have opted out of parenthood about why they need such a space to tell their stories, and why they don't feel the need to defend or justify their choices. We also asked six "Not-Moms" about some of the typical (and most hurtful) responses they get when they tell people they don't have kids. Here's what they had to say.

"The most popular response I get is 'You'll change your mind.' It's offensive, as it presumes that someone knows me better than I know myself, or that I'm not a grown woman capable of making a lifelong choice. No one would dare tell a mother that she'll change her mind about being a parent. The other most common reply is 'When the right person comes along...' This is similar to 'You'll change your mind,' but with the added insult that my personal decisions and beliefs will be completely altered by a man, and that committing to someone means I will also want to commit to parenthood.

"The most common reaction I get from people is a bit of a surprised expression — then they go, 'Really?' It's like they just want to make sure I wasn't joking, or maybe misunderstood what I said. After that, most people will just drop the subject and talk about something else, but I usually get a confused look, like they are trying to process or understand my position. Some will ask the inevitable 'why?' Usually they add, 'Don't you worry about being all alone when you are old?'"

"I had a hysterectomy, and now that that variable is out of it, people don't expect that they're going to change my mind anymore, as they used to. What's kind of gratifying is when people ask if I'm ever going to have kids, and I tell them I had to have a hysterectomy, they look so sad and forlorn. But I feel like they should be sad — they shouldn't be asking me that question anyway. People don't understand how someone could be happy about a situation like mine.

"My mom never calls me. My sisters have kids, and she calls them all the time to check on the grandkids. I wonder why I'm the one having to maintain my relationship with her and why it's not two ways. I cut contact and said to myself that I'm not going to be the one to call. I haven't heard from [my mother] in a year and a half. Why are grandkids the only thing she reaches out about? What's wrong with me that I'm not good enough to have a relationship with?"

"People don't understand how someone could be happy about a situation like mine."

"My [extended] family treats [my partner] and me like we don't have other things going on, because how could we if we don't have kids? Nobody asks me about my job or what's going on with me, what I'm on the board of or volunteering for. My sister, who has four kids, called me one time in the middle of the week at about nine o'clock in the morning, and she was like, 'Oh, you're up!' I do get up at a normal time and work! Just because I don't have four kids to get ready for school doesn't mean I'm sleeping all day. I have a job! Whatever [parents] are projecting about the choice that they made, it means they're not getting it. People will say, 'It's so nice that you can do X.' They made a choice to have kids. Nobody forced them."

"The first thing people ask is 'Why?' They want to know why I wouldn't want kids. Even people without kids ask that. I tell them that it is because I never want to be a single parent (even through divorce), and thus I don't want kids. The most insulting thing is when they tell me that a man will change my mind, or when they say, 'You'll feel different when you're older.' Older than what?"

"When I found out at 25 that I had a hereditary connective tissue disorder and a 50% chance of passing it on to any kids I would have, it solidified my answer on not having kids. My friends and family know the reasons why I am choosing to be childfree and they haven't pressured me much — except for my dad, who will comment under his breath that he is hopeful I will change my mind.

The worst response I have gotten about my childfree ways was when I was talking to an acquaintance about not wanting children, without going in-depth about why. Her response was, 'At what age did you find out you couldn't have kids?' I asked her why she thought I couldn't have children, and she said, 'Well, [infertility is] the only reason a woman should have for not wanting a child of her own.' Needless to say, I didn't speak to her again."

*First names have been used to allow sources to speak freely on private matters.