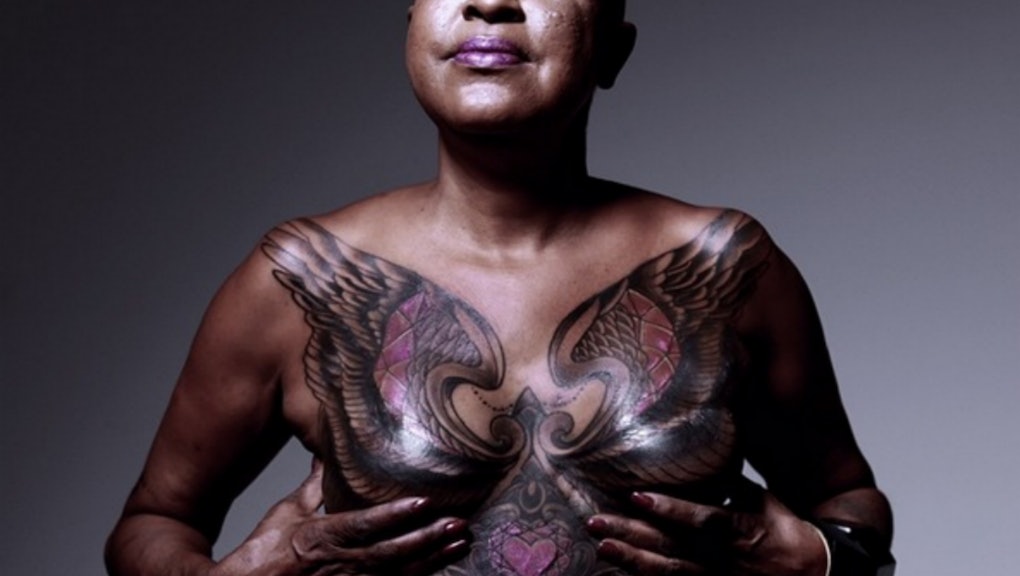 These Are the Artists Empowering Breast Cancer Survivors With Beautiful Tattoos

The wrist. The ankle. The back of the neck. The upper arm. The (unthinkable) lower back.

These are all regular tattoo spots, most done without much fanfare. But what about the chest? What about on top of breasts? Or, more specifically, on top of scars?

For breast cancer survivors and those who have had mastectomies, such tattoos are more than a possibility — they're an increasingly desired tattoo style with an entire diverse community of artists catering to them.

Tattoo artists devoted to an important specialty: Shane Wallin, a tattoo artist who operates out of San Diego and Minneapolis, was introduced to post-mastectomy tattooing in 2012, when his first client, Shari, asked him to design a black lace bra tattoo to cover her scars.

After the design swirled around the Internet, he became "Internet famous" for his work — work that's only growing in visibility and popularity.

Wallin's viral image helped bring attention to post-mastectomy tattoo work and the other artists who are doing them. That includes Holly Feneht of Santa Clarita, California, whose work with 25-year-old breast cancer survivor Nikki Black went viral just this week.

Feneht said she first became aware of post-mastectomy tattooing a little over two years ago. She had had close friends and family members diagnosed with breast cancer, so when someone mentioned the idea of covering up scars with tattoos, she jumped at the opportunity.

What followed her first post-mastectomy tattoo were dozens of enthusiastic requests for more. So in September, she made the leap and opened her very own studio entirely devoted to post-operational and paramedical tattooing, called the Gilded Lily, where she offers not only decorative post-mastectomy tattoos but also 3D areola tattoos for women who want a more natural-looking bust.

Wallin has done the same, keeping the tattoo stations in his specialty Minneapolis and San Diego studios comfortable and private with post-mastectomy clients in mind — serene oases rather than caves that blasts Metallica.

For these works of art, technique matters: To do a great post-mastectomy tattoo, numerous artists told Mic, the artist has to be attuned to several things. For starters, skin after radiation and a mastectomy is often unpredictable.

"It's one of the biggest challenges when I'm doing large-scale stuff," Wallin said. "You don't know what sort of skin you're going to be dealing with, and what sort of disfiguration and scar tissue can come with radiation and overall skin sensitivity."

Amy Black, a tattoo artist based in Richmond, Virginia, who's been doing post-mastectomy tattoos since 2010, told Mic, "First considering elasticity, skin is totally different in that area. It's going to be completely different per person. What radiation does to somebody is basically a really bad sunburn."

"The other thing that's tricky is that it depends on the procedure and cup size," she added. "The size will temper the skin that has been stretched past what it normally would be to create that new bust shape."

Black's first post-mastectomy tattoo was actually a cold call in 2010, when a woman contacted her directly about doing a one-sided tattoo on her chest.

"As soon as she asked me, I was thrilled," Black said. "I had been hoping to be able to do these types of tattoos in my lifetime."

"I had been hoping to be able to do these types of tattoos in my lifetime."

Because of Black's years of experience, she can speak to the community that's blossomed over the last few years, largely in part to the recent virality of these artistic breast tattoos.

"When I started tattooing in 1992 and 1993, tattoos were not socially acceptable," Black said. "There were barely any female tattooers, really. But with the Internet and people sharing their stories, it's now a community. And these women who are coming out and talking about these pieces are huge for us."

"It's a way to represent femininity and get part of that back": The designs that women tend to cling to — and go viral — are tattoos with a feminine flair, with floral details, vines and butterflies.

"It's a way to represent femininity and get part of that back," Black said. "They want something that will flow well on their breasts, so flowers and vines and cherry blossoms have been huge."

The more organic designs flow better on the chest, which is something a skilled artist considers.

What these women are drawn to also speaks to why they're getting these tattoos in the first place. According to Feneht, a woman's decision to get the tattoo can be many things, but it is about hiding her scars, creating something beautiful and, ultimately, returning to normalcy.

"It's about getting as close back to normalcy as possible," Feneht told Mic. "It's being able to look in the mirror and saying, 'I'm back to being complete as a woman,' or a substitute for that. Some of them are like, 'I'm tired of seeing these scars, what else can I do?'"

Black, who founded the nonprofit Pink Ink Fund to raise money for women who want these sorts of tattoos, adds that the decision can also be a testament to body ownership. "Whenever someone has to go through being diagnosed with cancer and then the mastectomy and reconstruction, they really have to follow what someone else says," she said.

"What I really love to do is let these people make these decisions for themselves and get exactly what they want," she said. "It's like, they're finally in control of themselves and their body. It's a really great moment for them."

"I like... to help empower them and bring beauty into their lives": Art and media virality aside, the most important part for these post-mastectomy tattoo artists is understanding the meaning of what they're doing and being emotionally attuned to clients.

All of the artists Mic spoke to said that being present and openly supportive of the person going beneath the needle is, above all else, the most vital thing, including Vyvyn Lazonga, a 68-year-old tattoo veteran who did her first post-mastectomy tattoo — a nipple restoration — in the 1980s.

"I like doing it because it helps me to be more of service out there in the world," Lazonga told Mic. "You can feel better to be helpful to people, to help empower them and bring beauty into their lives."

With these artists, there's an awareness that post-mastectomy tattoos are not an impulsive afterthought. For many, it's the final stamp that one chapter of their lives is over and that they have survived. At the end of the day, after hours of working on a client, these artists just want them to ultimately feel empowered and relieved.

Kristy Quinones, who works out of San Francisco and did her first post-mastectomy tattoo just last year, said it's all about the client feeling comfortable again with herself.

"Even if they don't want to show it off all the time, it's just about feeling better about looking the mirror and not remembering terrible times," Quinones told Mic. "It's like a final 'I'm done. I made it through it,' and now there's something beautiful."

Wallin, on the other hand, braces himself for any reaction at all.

"At this point, it's the same with everybody I work with," he said. "They look at the mirror and they break down and they cry and then they start laughing. So I guess I'm looking for a big smile and restored self-esteem. I want them to see something on their body that used to make them sad make them feel beautiful."