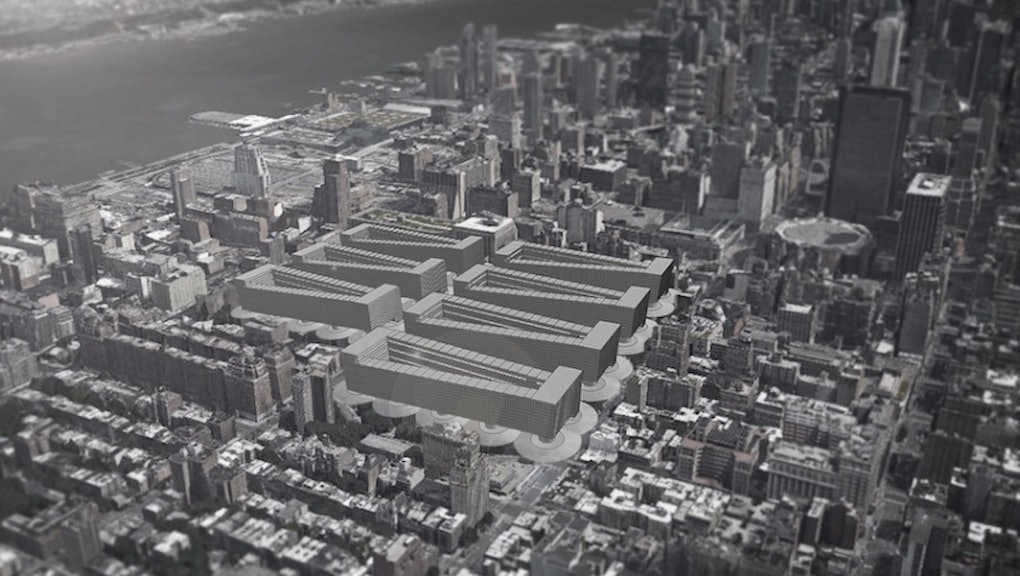 For the people of Cycle Space, a collective of architects and urban designers, a perfect world would mean an absence of cars. Instead, people would rely on bikes for transportation, and roads, buildings, residences and public spaces would be designed for cyclists rather than drivers. It would be, as Cycle Space puts it, a "velotopia."

In Cycle Space director Steven Fleming and his colleagues' view, it's not enough to build cities that have support for cyclists tacked on as an alternative; the design for the cities should inherently revolve around cycling.

Unsurprisingly, Fleming himself is an avid cyclist. "I'm habituated to bicycle transport," he told Mic in an email. "Whenever I go with someone in a car I'm amazed by the rigmarole of parking then walking that extra distance with all your belongs or shopping over your shoulder. On a bike I go right in the door with my stuff still on the rack."

In Cycle Space's blueprint for New York City's Chelsea neighborhood, apartment buildings would utilize exactly one city block and would consist of ramps that "rise in a double-helical coil," making it easy for bikers to stash their gear. They call this a "start of trip" building — a structure designed to accommodate the non-active parts of biking. (It's not enough to only plan for act of biking itself; thought must be given to storage as well.)

"A built environment designed around cycling has to provide families with children with at least as much shelter, safety and convenience as they like to think they can have in the suburbs with a car and an internal access garage on the front of their house," Fleming told Mic.

Of course, the collective has some novel ideas for actual bike travel, too. Their concept design for covered bike paths boasts protection for all kinds of weather, including snow and rain. "Public investment in elaborate bike infrastructure can easily be justified on the basis that weather protection and wind assistance are a common good to all cyclists, and that cyclists perform a common good to the city," the description for that plan explains.

When it comes to roads and passageways, Velotopia residents would travel via "bike highways" and pedestrian bridges that connect raised buildings. ("You could ride on that bridge if you weren't in a hurry," according to the project's explainer.) If you're in a rush, fear not: A space lining the city's floor allows for speedier cyclists and could work with motorized bikes for police activity and deliveries.

In our current city plans, traffic systems often revolve around cars; in New York, for example, city streets are designed with automobiles in mind, even though less than half the city's residents own them. If bikers didn't have to maneuver through unfriendly traffic, they could move much more quickly and seamlessly.

In Fleming's view, even smaller towns — which he simply sees as stretched out cities — could be built for bikes.

"There are vast conurbations: small towns connected by roads so they can function the same way as a city, with school choice and job choice and access to customers. All you have done by moving there is swap an hour of urban congestion for an hour dodging head-on collisions," Fleming said. "A bicycle mobility platform is the key to making the city feel like a small country town. Once you find something better than cars at ground level, you find you have acres of land right at your feet for urban farming and leisure."

There's been a general upward trend toward cycling in the United States — according to a 2014 Census report, the number of bicycle commuters increased from 488,000 in 2000 to 786,000 between 2008 and 2012 — and cycling is popular in many other parts in the world as well. Given this, Cycle-Space's plans, outlandish as they may be, are a fascinating look at what our cities could look like in the future.

Of course, as with anything that turns widespread, pre-existing concepts on their heads, these cycling utopias would likely come with their own challenges. Traffic patterns and laws would require a reboot, and allowances would need to be made for people who aren't able to ride bicycles. But for Fleming, the benefits would far outweigh any roadblocks standing in the way.

"I'm concerned with chronic disease, global warming, fast commuting and not leaving anyone out, like the poor or disabled. Heavy machine mobility platforms can't serve all those concerns," he said. "Our work is showing how a built environment that starts with the bike can lead to an end result that works on all of those levels."