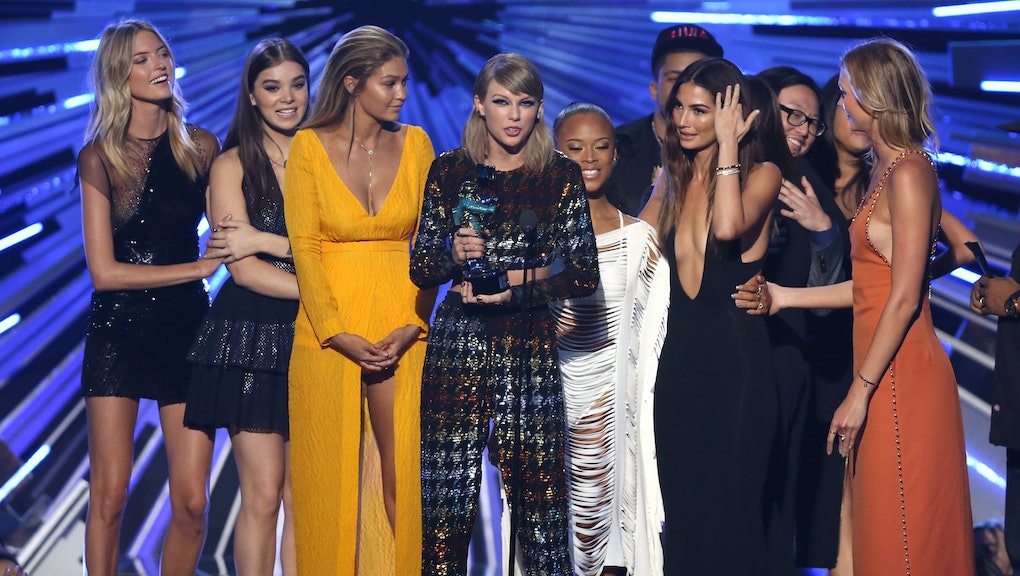 Taylor Swift Just Revealed Why She's So Obsessed With Her #Squad

People love to question whether Taylor Swift's The Craft-like attachment to her veritable witches' coven of famous female besties is genuine or just PR bullshit. Such was one of a few hot topics addressed in a new GQ article touted as Tay's "Realest Interview Ever," in which the pop star opened up to author and essayist Chuck Klosterman.

"People get skeptical," Klosterman wrote of Swift's squad. "Her famous friends are marginalized as acquisitions, selected to occupy specific roles, almost like members of the Justice League."

Swift was quick to dispel this criticism by simply admitting that she didn't have very many friends growing up. "I honestly think my lack of female friendships in high school and middle school is why my female friendships are so important now," she said. "Because I always wanted them. It was just hard for me to have friends." As a grown-up who's now the biggest pop superstar in the world, she's making up for all those missed sessions of "light as a feather, stiff as a board" she missed as an awkward teenager.

When Klosterman asked her to get more specific (because, in his words, "popular people often claim they were once unpopular"), she shared a particular story in which she asked all of her middle school girlfriends, one by one, if they wanted to go to the mall with her. After each of them RSVP'ed no, Swift showed up to the mall with her mom and found out that everyone was literally hanging out without her — which is basically every middle schooler's worst nightmare.

Tay's energy when recounting the saga gave Klosterman the sense that she was indeed keeping it real with him. "It just seemed like a (very real) memory that might be more internally motivating than any simplistic desire for money or power," he wrote, dispelling any lingering skepticism he may have had about her sincerity.

That Taylor's current friend obsession at least partially stems from a negative middle school social experience isn't entirely shocking. Middle schoolers are known for being the literal worst people ever, with many an article written and study conducted about the negative effects of cliques and bullies during that awkward life period.

Beyond Swift, it should be noted that this week will basically go down in #history as the Week of Really Quite Good Author-On-Celebrity Interviews: This GQ profile comes but a mere three days after Miranda July penned a heartfelt essay about her recent interview with Rihanna for the New York Times.

"My understanding, from the moment she sat down, was that we were in love," July wrote after chronicling their conversation, which covered everything from how Rihanna feels about casual sex, to her relationship with her mom, to the fact that she's afraid her vagina might stretch too much during her future hypothetical childbirth.

While the tone between Klosterman and Swift was significantly less BFF-y, at least it answered the one question we've been asking ourselves about Swift's extensive social circle. And because of it, we shall never question the squad's integrity again. Hail to the guardians of the watchtowers of the East!