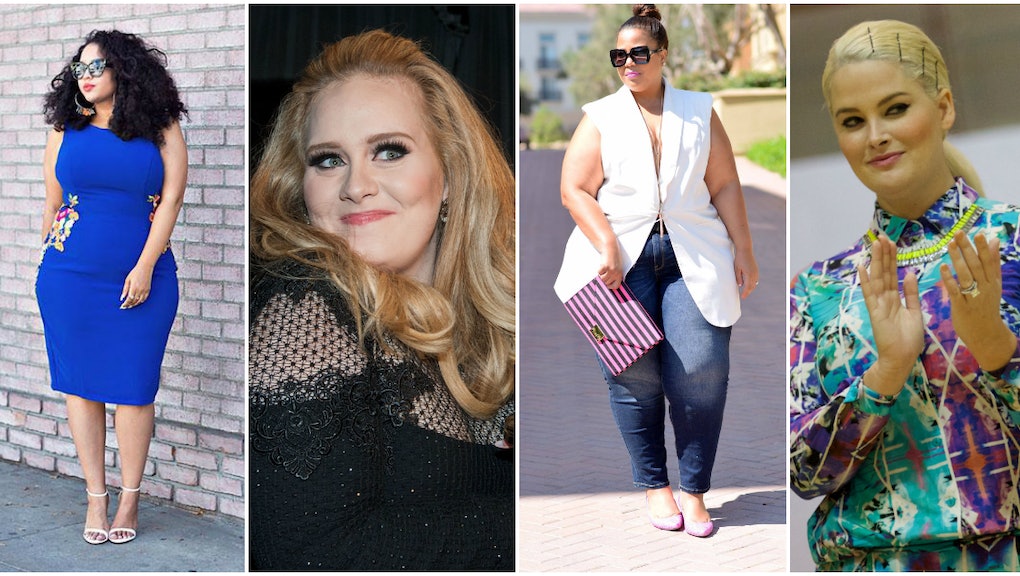 11 Body-Positive Mantras We Want to Write on Our Mirrors, From Our Plus-Size Heroes

Whether a size zero, a size 28 or anywhere in between, many of us — particularly women — have received unsolicited body-shaming comments or looks from other people at the gym, on the street or in a fitting room.

We've also received them from ourselves. All too often, we put the pressure onto ourselves, inspired by the lingerie model we passively saw staring down at us from a billboard on our way home or the stunning friend-of-a-friend-of-a-friend who always looks so perfect in her Instagrams. What we see around us affects our own image and self-esteem (something studies have proven, though they hardly need to). It's easy to stare at yourself in the mirror after staring at others and see every imperfection.

But there are women out there providing a helpful counterbalance, names you're seeing more and more as wave of body positivity grows stronger from bloggers and celebrities, as well as plus-size models. Their words echo what we already know to be true: that we need to ditch the maddeningly pervasive body judgments, and that no body is to be ashamed of.

But when that gets hard to remember, it's good to have their words as mantras.

Bodies may look toned and smooth in ads, but human bodies move, and that's got to be OK, Graham said at Forbes' 30 Under 30 Summit this year.

"There is no right or wrong size if you're healthy and fit." — Marquita Pring

At the end of the day, developing healthy habits is more importance than being a specific weight, and one isn't indicative of the other, as Pring told Fashionista in 2011.

In an interview with PopSugar in August, Bidot reminded us that embracing your body for what it is rather than fighting it can be the positive change in attitude we need to see ourselves differently.

As Holliday told Parade in 2014, our physical forms aren't the only thing we've got going for us — and we shouldn't lose sight of the countless other things that make us, us.

"This is it, this is the only body I've got." — Whitney Thompson

You can envy other people's figures, but ultimately our bodies aren't Play-Doh, and we can't mold them or trade them in for something else. Figuring that out, the America's Next Top Model winner told the Daily Mail in 2013, is liberating.

"You can be fashionable and stylish at any size." — Gabi Gregg

Gregg, a model and blogger, reminded EverythingGL.com in October 2014 that being stylish and looking awesome in clothes doesn't have to be dictated by weight. Her own photos are killer proof.

We can admire other women's bodies all we want, but as Huffine told Cosmopolitan.com in February, we literally can't make our bodies be something they're not.

"Be the best person you can be, both externally and internally." — Chastity Garner

Garner told Plus Size Beausion in 2013 that while being a model is wonderful, how you look from the outside only accounts for so much.

"Be just who you are — it's actually more beautiful." — Crystal Renn

The model who made the publicized transition to plus-size modeling — and been an outspoken critic of the fashion industry — reminded readers in Interview magazine in 2010 that being beautiful is rooted in being authentically happy.

"I don't have time to worry about something as petty as what I look like." — Adele

As Adele said to Rolling Stone in 2011, stressing out over your body saps you of energy — and who's got time for that when there are shows to attend and awards to win?

"I've got other things to think about." — Melissa McCarthy

The actress told Good Housekeeping in 2012 that getting caught up in body concerns is, of course, natural. But it's crucial to snap yourself out of it because, well, life contains so many other important things worth prioritizing.