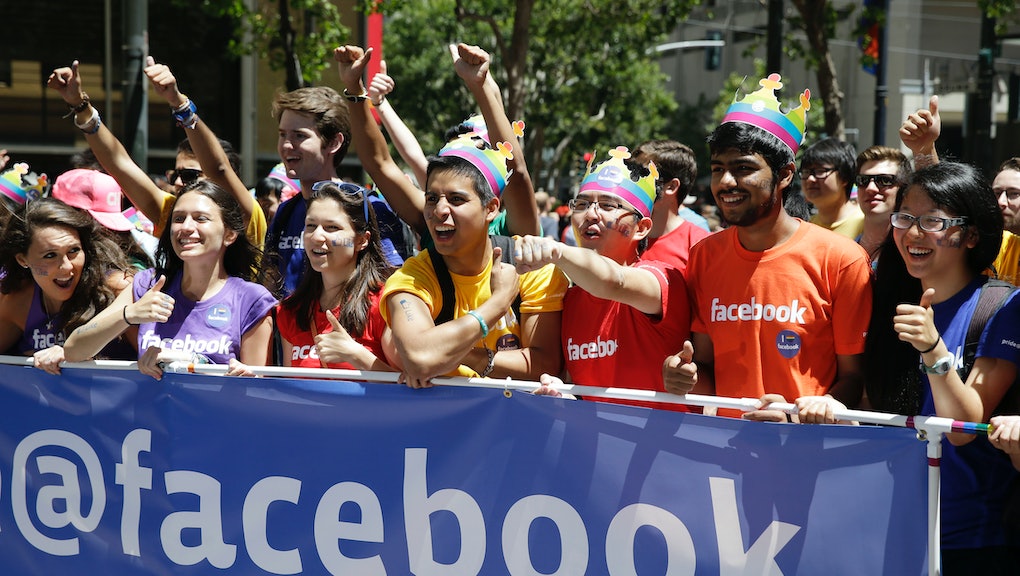 Come out, come out, wherever you are. Even if that's on Facebook.

This week, in observance of Coming Out Day on Sunday and Spirit Day on Thursday, Facebook's blog released data showing just how much LGBT Facebook is in lock-step with LGBT history.

According to the data, around 800,000 people came out on Facebook in the past year alone, which is about one-seventh of Facebook's estimated 6 million LGBT users. The most popular day for coming out, by far, was June 26, the day of the Supreme's courts ruling in Obergefell v. Hodges, which made marriage equality the law of the land.

Facebook tracked users who came out by "[updating] their profile to express same-gender attraction" or who used the site's custom gender feature, which it rolled out in February 2014 after extended campaigning from LGBT people.

"Not only has the total number of Americans who have come out on Facebook risen dramatically, but so has the number coming out each day," Facebook's data scientists wrote Thursday.

Facebook also used the June 26 ruling as a marker for other data to show how engaged people are with LGBT issues. Regardless of a user's sexual or gender identity, some 5.7 million Americans "like" at least one of the 300 most popular LGBT pages (including organizations like Human Rights Campaign or GLAAD). In the five days following the decision, LGBT rights groups netted 150,000 new fans, Facebook said.

In charting this data, the social media site included two other dates preceding June 26: the December 1 observance of World AIDS Day and the beginning of the Obergefell v. Hodges arguments in April. However, the Facebook data team also acknowledged that the arguments coincided with the Diane Sawyer interview with Caitlyn Jenner.

While LGBT people seem to be feeling more comfortable with openness on Facebook, it was only last year, September 2014, when Facebook's "real name" policy angered many in the LGBT community, especially the drag queen and transgender communities, for forcing users to use their legal or birth names — verifiable via ID cards or bank statements — rather than names they have chosen for themselves. Facebook quickly reversed the decision and apologized to the communities publicly.

As the numbers show, much has been forgiven in the name of pride.