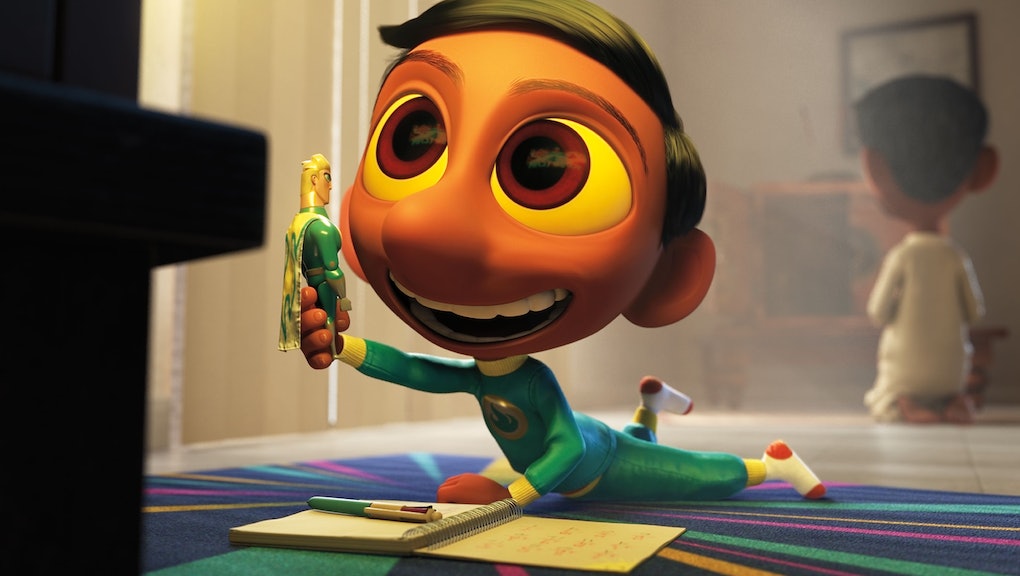 When Pixar's The Good Dinosaur hits theaters Nov. 25, it'll have to fight for attention with a potentially even more hyped project: the short that will play right before it.

"Sanjay's Super Team," the animation studio's latest short film, has garnered a lot of press for what is essentially supplemental material to a feature film. There's good reason: The short features an Indian-American family as its focus — something rarely seen in Western animation. Better yet, the young hero, Sanjay, fights evil with the help of Hindu deities stylized as superheroes.

In the first clip from the film, released Thursday, Sanjay is interrupted by his father as he watches cartoon superheroes. It's a deeply personal scene for director Sanjay Patel — as is the film itself.

"I knew exactly what that meant: 'Turn off the TV, Sanjay, and get your tail over here. We're going to chant and count mala beads for half an hour,'" Patel told USA Today of the scene back in July. "And I'm like, 'I don't really want to do that. I really want to watch Voltron.'"

The full short will feature gods Vishnu, Durga and Hanuman as colorful heroes made real. It's a very different kind of project for Pixar — very culturally specific, without any dialogue — but an important one for its creator.

"I'd be the first guy to sell out my dad and my parents' culture, so it really felt like, man, I found a way back home and champion it," Patel told USA Today.

The full short will be available ahead of The Good Dinosaur in theaters. Watch the full first clip below.