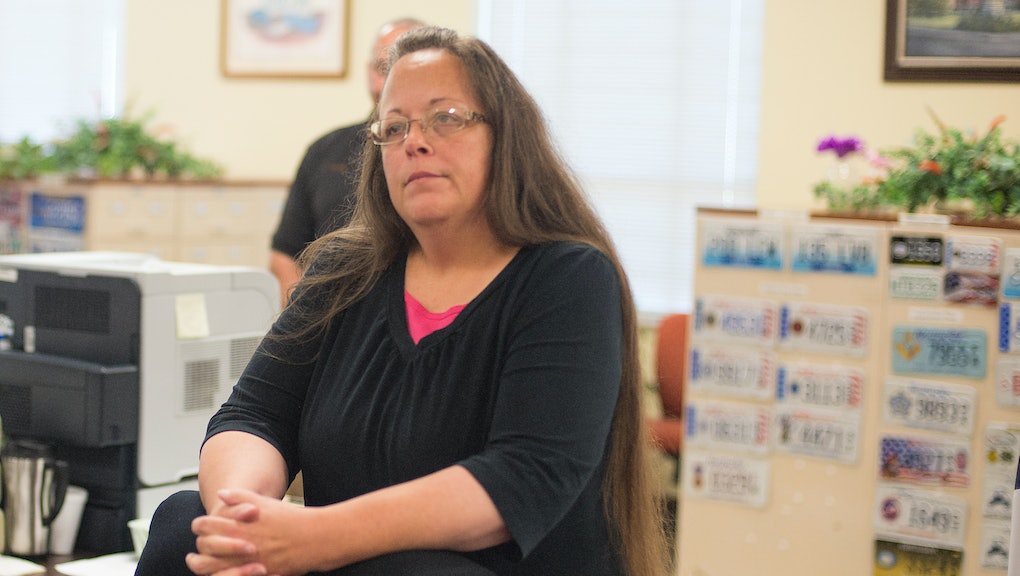 Kim Davis, the Rowan County, Kentucky, clerk who went to jail after refusing to issue marriage licenses to same-sex couples, may be about to get a taste of her own medicine.

Members of the infamous right-wing Christian hate group Westboro Baptist Church are planning to picket outside Davis' offices on Monday, reports Fox 2 Now St. Louis. According to a statement issued by the church, the group is targeting Davis because they believe she is a hypocrite about marriage, based on her multiple divorces.

"That man that Kim Davis is living with, and calling her husband, IS NOT!" the church wrote in a press release issued to the news station. "Her husband is Dwain Wallace, who she married when she was 18-years-old. It does not matter how many years you pile on! It was adultery at the beginning, adultery in the middle and it is indeed adultery today!"

On Twitter, the group said Davis' divorces and subsequent remarriages are just as bad as "fag marriage."

The Westboro Baptist Church has garnered an infamous reputation for vicious rhetoric on gay marriage and other social issues like abortion. In the past, the group has planned protests at the funerals of terrorism victims and soldiers. They are best known for their signs and T-shirts that read "God Hates Fags" and "Thank God For Dead Soldiers."

The group also believes that God is punishing the United States with various disasters for its social liberalism.

While it might be tempting for some to call Davis out on her divorces as a sign of hypocrisy, Fox 2 Now St. Louis reports she does not consider her past relevant since becoming a born-again Apostolic Christian.

Medium's Michele Catalano wrote on Sept. 5 that people interested in social justice should leave the marriages off the table, since it could be considered a form of slut-shaming.

"It makes her human, it makes her vulnerable, it makes her have a history she probably doesn't want and you probably wouldn't covet," Catalano wrote. "What Kim Davis is, is a bigot. It's possible to call her out on that without calling out her marriage status ... [or] her lifestyle or her looks."