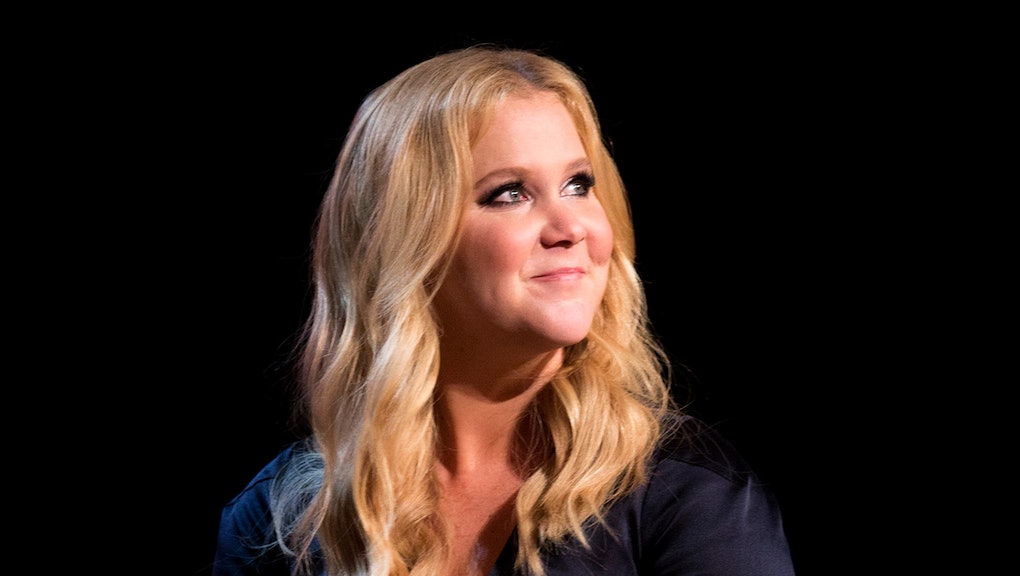 At its base, Amy Schumer's comedy is based on being a woman. That sounds obvious or even too simple. Certainly there's a definable element of being a "sex comic," as she called herself during Saturday night's Amy Schumer: Live at the Apollo. The most memorable section of her first HBO stand-up special was the final moments, in which she discussed different disgusting sexual positions like the Dirty Rochester.

She wasn't just listing positions to shock the audience, however. Schumer was making a critical point about why these sexual jokes are intrinsically male-focused. They're silly, sure, but is female pleasure so far away from collective consciousness that it doesn't even factor into disgusting sex position parodies?

Nearly every thing Schumer said in her special was, on some level, about being a woman. Often, the jokes were about embracing something "dirty" about femininity, like underwear stains or a repeated bit about training for her film Trainwreck. That's what makes Schumer's work so powerful: It's defiantly female. It's fuck-you feminism.

The segment of the special about stains on Schumer's underwear is particularly effective because it comes early. She's not here to ease the audience in and they best know what they've gotten themselves into. This is a woman who is going to talk about vaginal discharge tied up in a Charlotte's Web reference. Not a fan? She doesn't care. She's not here for you.

There's an unabashed confidence to Schumer's work despite how self-deprecating it is. At one point, she describes her fifth-grade self as "this jack-o-lantern with tits walking around." That requires no shortage of personal confidence. It's an ownership of flaws, even the grossest ones.

There's no question 2015 has been a massive year for Schumer, recently capped by winning an Emmy. Her success is in large part thanks to her willingness to call out sexism in all its forms, especially in Hollywood. In Live at the Apollo, Schumer hit quite possibly her peak with a diatribe about the 2011 Kevin James film Zookeeper.

Schumer recently watched the film, she says, and does not recommend it. It's about talking to animals, "but that's not the most unrealistic part," she warns. The truly absurd thing about Zookeeper is that the nerdy love interest who James doesn't notice is Rosario Dawson.

"Arguably the most fuckable actress," Schumer says of Dawson, yet the actress has to play a role where she just wants James to notice her. "She should get an Oscar for that fucking movie."

Schumer's vitriol in this sequence is real and passionate. This is an industry practice that she's had to deal with — which explains why she took things into her own hands and wrote Trainwreck herself. If the status quo is going to change, it's going to take women like Schumer standing up and calling it out.

The comedian has come under some scrutiny since her star reached supernova status this year. Criticism of dubious jokes about race from her past got so loud that she had to issue an apology in July. Those critics weren't likely placated watching Live at the Apollo. While she mostly stayed away from talking about race at all, one joke regarding not knowing anything about Ferguson felt tone-deaf.

Despite her shortcomings, though, Schumer is so incredibly valuable to pop culture in 2015. At a time when womanhood in America feels so attacked, whether through harassment on the Internet or in governmental attempts to defund Planned Parenthood, Amy Schumer is the wild, passionate, sarcastic, unique general fighting for the rebellion. Her fuck-you feminism is necessary.

Should she improve? Absolutely. Will she need to expand and freshen up her work? No doubt. Thank goodness she has the space to do it. As Live at the Apollo reminded us, when Schumer is on her game, she's unstoppable.