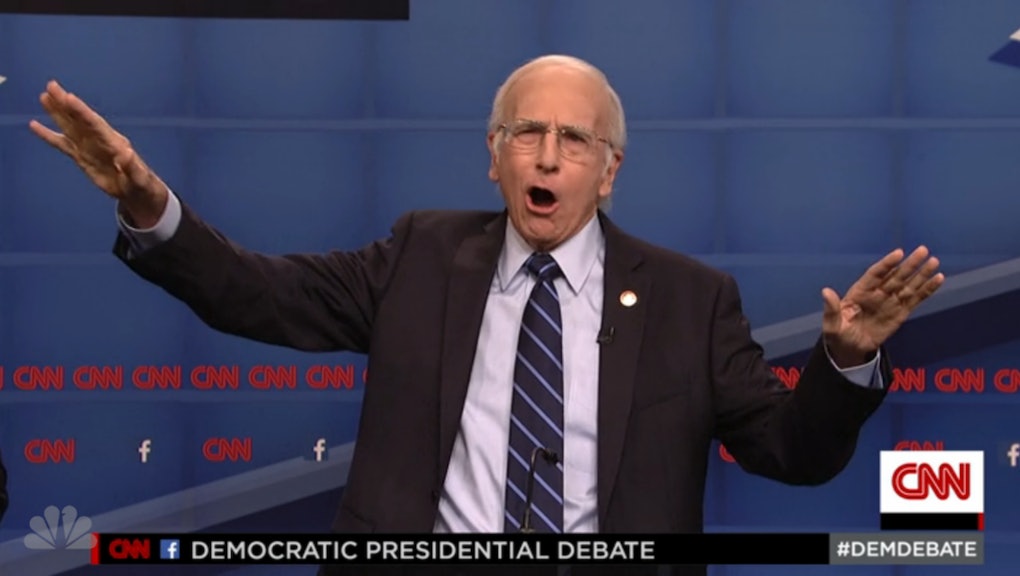 It's a match made in comedy heaven.

Comedian Larry David performed an impressively spot-on impression of presidential candidate Bernie Sanders during the Oct. 17 edition of Saturday Night Live, in a sketch that will probably be remembered as a highlight of the show's 41st season.

"I know, hello, hello, hello, enough with the hellos let's do this," David said, introducing himself to the show's version of the first Democratic presidential debate in Las Vegas, before telling Anderson Cooper (Jon Rudnitsky), "I'm hungry, but I'm good."

He was joined by Kate McKinnon as Hillary Clinton, who the camera briefly cut to smoking onstage while issuing a begrudging response to a question.

"Not a fan of the banks," he continued. "They trample on the middle class. They control Washington, and why do they chain all their pens to the desks? Who's trying to steal a pen from a bank? Makes no sense! That's why you gotta break the banks into pieces, and then flush the pieces down the toilet, so you can never put the banks back together!"

The funniest line came as David exaggerated the differences between Sanders and the others candidates, adding "So who do you want as president? One of these Washington insiders, or a guy who has one pair of clean underwear that he dries on a radiator?"

Under-utilized during the sketch were Jim Webb (Alec Baldwin), Lincoln Chafee (Kyle Mooney) and Martin O'Malley (Taran Killam), each of whom got in a few lines but of whom only Baldwin was able to get in any real zingers.