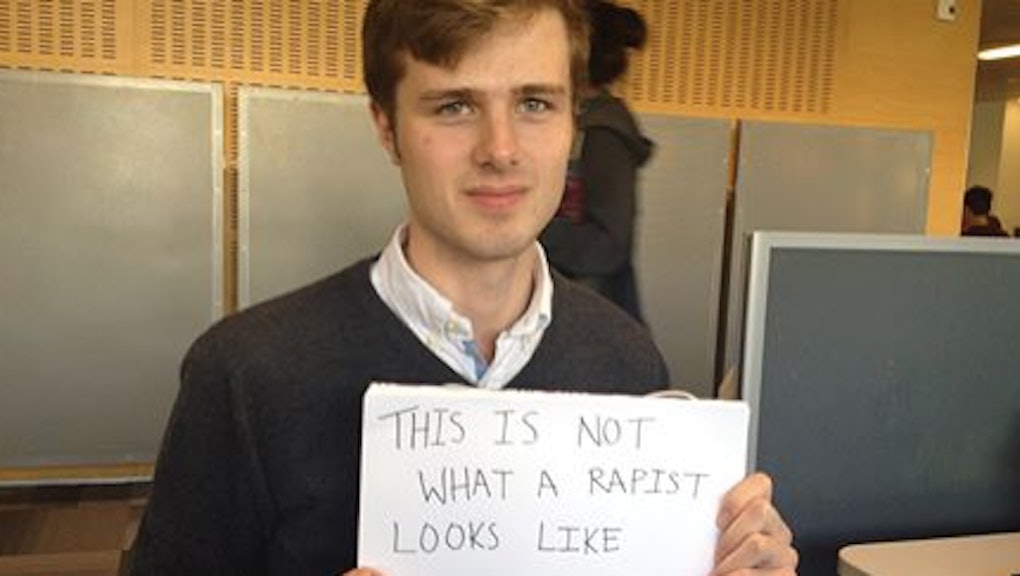 The call for consent education seems to be growing increasingly stronger in the United States and United Kingdom alike. But not all students are on board, specifically one vocal University of Warwick student.

"I love consent," 19-year-old George Lawlor wrote Wednesday for the Tab, yet somehow found an invitation to attend a class about the topic he claimed to value "a massive, painful, bitchy slap in the face" and "the biggest insult I've received in a good few years."

Those leading the class, he wrote, should be doing "more useful things" with their time, like "campaigning, volunteering and caring for other people." The teen even posted a photo of himself holding a sign that read, "This is not what a rapist looks like."

"I needed to highlight that from my experience with men, the majority of them did not know the full meaning of consent," one 20-year-old student told BuzzFeed of her decision to write a post disagreeing with Lawlor. "They don't have to be convicted rapists to subject women to non-consensual sex."

What does violating consent look like? Consent education counters the very idea Lawlor put forth in his tirade: that there is a specific profile of a rapist. Anyone can potentially violate another person's consent in a number of contexts. For example, 4 out of 5 survivors know their assailants and 47% of rapists are a friend or acquaintance, according to the Rape Abuse and Incest National Network, citing a U.S. Department of Justice study.

What's more, research shows many students need this education. One recent Washington Post and Kaiser Family Foundation poll found students are quite confused when it comes to what constitutes consent: 54% of students surveyed said a nod constituted consent while 40% said it did not. Another recent study found 1 in 3 college men endorsed acts that would constitute rape, but did not identify those acts as such.

Violations of consent also extend beyond purely sexual contexts. College men in fraternities both violate the consent of others and experience this violation in hazing rituals, Cliff Leek, managing editor of the journal Men and Masculinities, told Mic last week.

The value of education: Considering that sexual assault is rampant on college campuses, consent education has its place: As many as 1 in 4 undergraduate college women in the United States have experienced nonconsensual sexual contact, according to a recent report by the American Association of Universities; a Telegraph survey puts the number at 1 in 3 in the U.K. As Jonathan Kalin, founder of the organization Party With Consent, told Mic in February, education is crucial to teaching students it's "fun and cool to rely on comfort, inspiration, compassion and empathy in your relationships, sexual or otherwise, rather than deceit, coercion and manipulation."