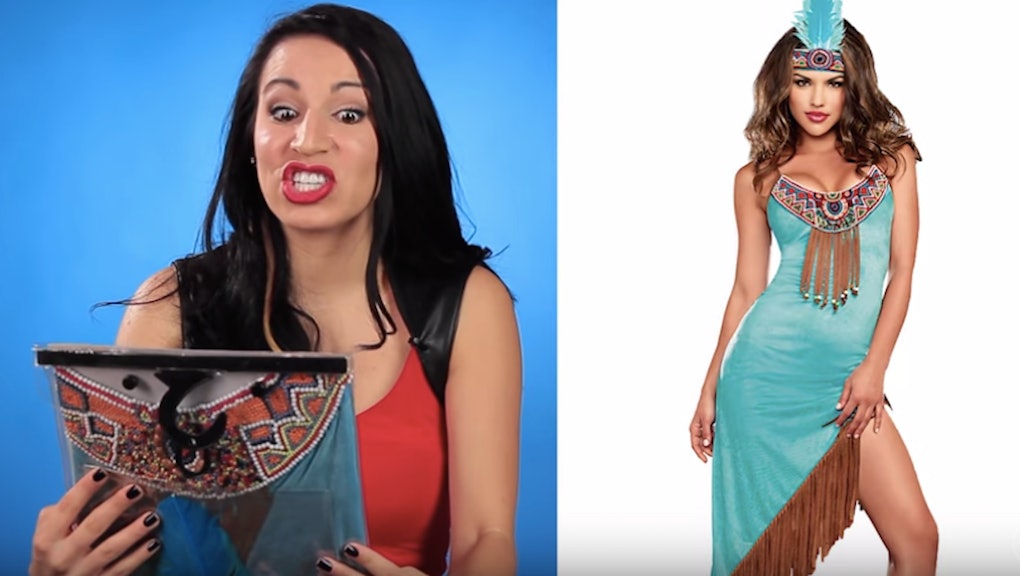 Alongside witches, vampires and superheroes, "Indian" costumes are a common feature of classic Halloween dress-up. Unlike those three costumes, Indian costumes have a consistent way of being downright disrespectful.

It's a point underscored in a BuzzFeed video where young Native Americans try on "Indian" Halloween costumes and share their candid reactions. The costumes have names like "Indian Brave," "Chief Indian Hottie" and "Tribal Temptation" — names that play into long-held stereotypes about Native Americans and reduce a group of people to one-dimensional characters.

Just saying the costume names feels wrong, one woman says in the video.

As each of the four people in the video tries on a different costume, it's apparent historical and cultural accuracy have not factored in. (One man calls the level of accuracy a "negative 4,000" on a scale of 1 to 10.) Instead, the costumes are rife with stereotypical visual shorthands, like feathers, beadwork, plenty of fringe and even an axe.

What's often lost with these symbols, of course, is the deeply regarded cultural and sacred symbolism that comes with the Native American headdress — practices that continue to this day. Feather headdresses, for example, are reserved for only certain individuals in Native American communities.

Misusing them only further perpetuates the erasure of Native American culture, Jessica R. Metcalfe, creator of Beyond Buckskin, a boutique and blog about Native American fashion, previously told Mic.

There are 562 Native American nations that are culturally, linguistically and ethnically diverse. "Playing Indian" on Halloween neglects the diversity of a living community that's historically been marginalized and persecuted over time.

The net effect is the stripping away of culture. "A costume like this keeps Native Americans in the past, as if we're not real people today," one of the two men featured in the video says. "There actually something that feels pretty disrespectful about wearing a people group as a costume," says the other.

Needless to say, Native American culture continues living. While stereotypes about "Indians" continue, there's a younger generation of contemporary Native American designers who are incorporating their culture and history into their work as a way of helping respect tradition while making it accessible to a wider population. The best part is it can be appreciated year-round, not just on a holiday like Halloween.

That, of course, is pretty much missed entirely with dumb costumes made of polyester and stereotypes.