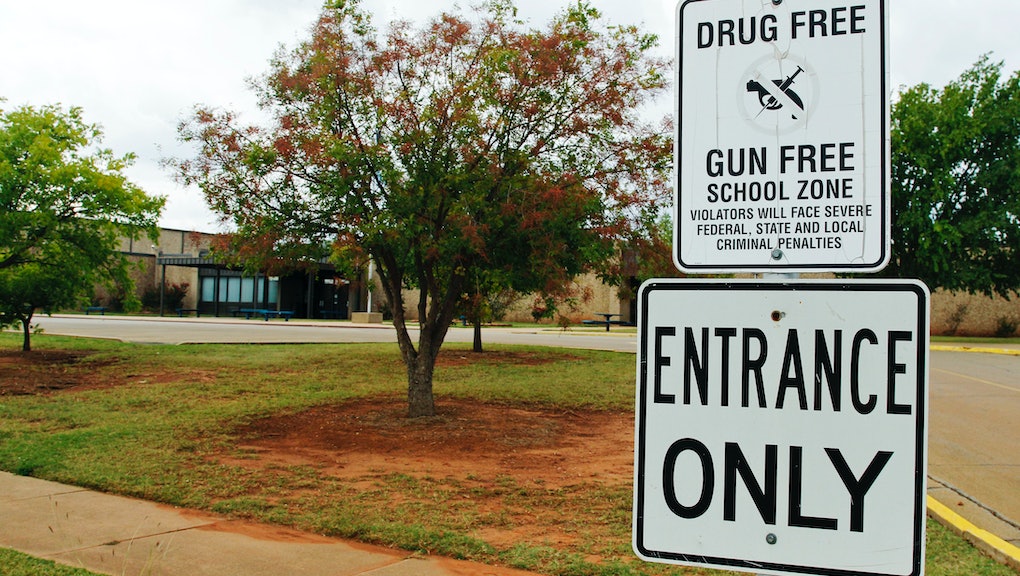 Public opinion polls are clear: A large majority of the United States wants the war on drugs to begin winding down.

But a new investigation by digital marketing and storytelling agency Fractl, released exclusively to Mic, shows just what a difficult task that might be thanks to deeply engrained punitive measures regarding drugs. Over the past few decades, the report shows, "drug-free zones," originally intended to nail dealers selling drugs to schoolchildren with harsher sentences, have taken over entire cities.

The result? The disproportionately poor, urban residents of those areas can be arrested and slammed with much harsher sentences than would normally be applied — whether or not there was any intent to sell drugs to children.

In some places, the laws even apply in the defendants' own homes.

According to the investigation, nearly 75% of the entire state of Alabama is now designated a drug-free zone, with the six cities of Montgomery, Decatur, Tuscaloosa, Mobile, Birmingham and Huntsville each having 75% or more of the city limits in such a zone. In Montgomery and Decatur roughly 95% of the city is covered.

Far behind but still boasting considerable territory under drug-free zones are South Carolina (18%), Arizona (17%), Pennsylvania (13%), Connecticut (11%) and Florida, Mississippi and Utah (tied at 10%). Since the zones are primarily located in urban areas, however, they affect a disproportionate share of the population in those states,

Visualizations from Fractl capture just how expansive the zones can be, some enveloping entire downtown districts and suburbs.

In a 2006 report, the Justice Policy Institute wrote the first drug-free zones laws "were enacted in a rudimentary form as part of the Comprehensive Drug Abuse, Prevention and Control Act of 1970" and were made harsher during the 1980s "'crack' epidemic."

According to the JPI, most drug-free zone laws create a buffer zone of 1,000 feet around designated locations in which harsher penalties can be applied to people caught with drugs.

"The penalties and penalty enhancements assigned to drug-free zone violations vary widely, but in many states they include mandatory or presumptive sentences," the JPI wrote. "Like other mandatory minimum drug sentencing laws, these statutes have contributed to prison population growth, and to racial and ethnic disparity in the use of incarceration."

As the list below demonstrates, many states have expanded zones beyond public schools to include parks, public housing, youth centers and churches.

According to The Sentencing Project, just seven states (Alaska, Georgia, Louisiana, Montana, New Jersey, Texas and Washington) currently apply exceptions to the laws for drug possession in private residences with no children present if the defendant "did not benefit from the offense." PrisonPolicy.org additionally notes Connecticut Gov. Dannel Malloy repealed two-year mandatory minimum sentences for drug possession in the zones in 2015, while a 2012 reform in Massachusetts shrunk the size of the zones from 300 feet and excluded those arrested between midnight and 5 a.m.

"The imbalanced effect of these laws is plain to see based on how they've been applied," write the authors of the new report. "In 2005, a New Jersey commission found that out of 90 convictions under the state's drug-free school zone laws, only two took place on school property — and none were prosecuted for the sale of drugs to minors."

"Massachusetts sentencing data indicate that 80% of defendants that received mandatory, enhanced sentences under the drug-free zone statute are black or Hispanic, even though 45% of those arrested for drug violations statewide are white," the authors wrote. In New Jersey, investigators found evidence the zones were being used to arrest and convict minority defendants at much higher rates than whites.

The authors of that report recommended states instead shrink the size of their zones in lieu of tougher penalties for people convicted of actually selling drugs to children.

"I have heard kids over the years talk about 'not doing shit around school,' whether it be a higher police/security presence and/or having a 'drug free' zone," Verni told Mic. "Either way it has deterred many but there are some that will try it regardless and those are the individuals that need to be addressed."

"Ultimately it is local, state and federal lawmakers that have to decide in a modern day of 2015 and beyond what laws are effective and which ones are out of date," he added. "The police will be charged with upholding those laws whether they agree with them or not."

With drug-free zones so widespread across the country, the justice system is likely to continue doing just that for years to come.