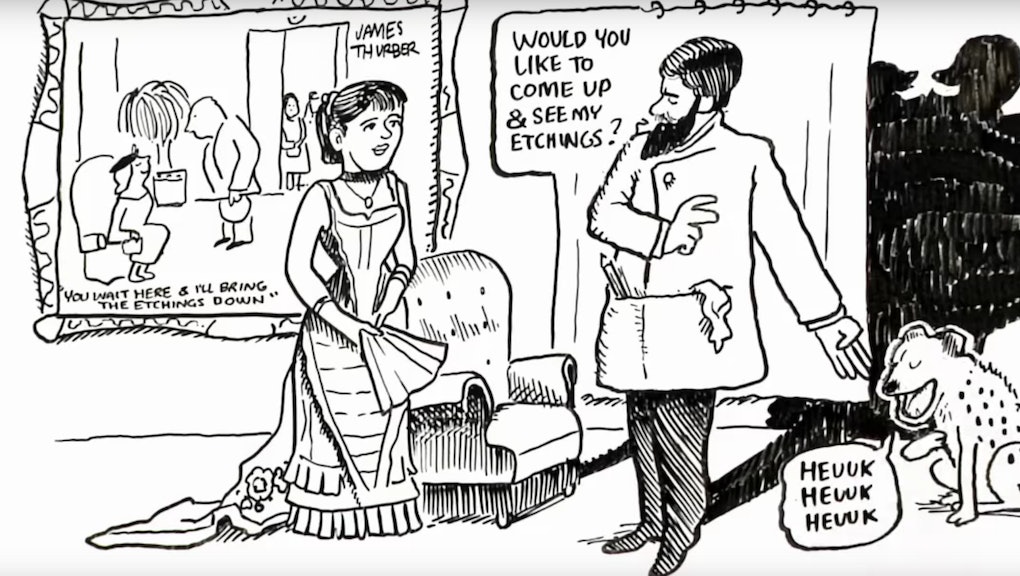 Was This Old-School Meme the First Ever "Netflix and Chill"?

For as long as there's been desire, we've struggled with the question of how to articulate that desire out loud. If we were all as brave as the '90s band the Vengaboys, we'd all have the courage to come out and tell our crushes: "Boom, boom boom boom, I want you in my room." But because that level of bravery eludes most of us, there are other, subtler methods to ask for what we want.

Case in point: the now-ubiquitous meme "Netflix and chill."

On its surface, the meaning of "wanna watch Netflix and chill" is both obvious and innocuous: It means inviting someone to watch a movie and hang out. But since the phrase first gained popularity on Twitter, it's become synonymous with asking someone to come over and hook up.

While the phrase itself is relatively new, the idea of shrouding one's sexual desires in similarly innocuous phrases has plenty of historical precedent. The ultimate example of that? The famous-but-forgotten line favored by our forefathers and foremothers in thirst, "Want to come up and see my etchings?"

While rarely used today, the phrase "Want to come up and see my etchings?" has been the subject of linguistic inquiry for years. It's also been referenced in numerous articles, such as this New York magazine piece whose headline pays homage to the phrase.

For the uninitiated, etching is a form of art in which a person covers a piece of metal with a top layer of wax and "etches" away at the wax to reveal a picture in the metal underneath. It has been a popular form of art since the 16th century. Beginning in the 1860s, there was a great "etching revival," which appears to have sparked the birth of the "want to come up and see my etchings?" invitation.

One of the earliest known uses of "come up and see my etchings" that Mic found is from Horatio Alger Jr.'s 1890 book The Erie Train Boy, which is partially available on Google Books. In a correspondence between a female character and a male suitor, the woman invites the man to view some etchings. "I have a new collection of etchings that I want to show you," she wrote.

He responds to her advance in the affirmative: "I shall no doubt find pleasure in examining the etchings which you hold out as an inducement to call," the paramour writes back.

Since then, "want to come up and see my etchings?" has clearly fallen out of favor, as has the art form on which the invitation hinges. But the precedent it set for memes like "wanna come watch Netflix and chill?" is clear: They're both phrases that shroud our sexual intentions under the guise of an innocuous invitation.

A brief history of innuendo: The need to rely on innuendo and coded language to make our intentions known stems further back than "want to come up and see my etchings?" It at least goes as far back as the Shakespearean era, according to Stuart Sherman, a scholar of Shakespeare and Restoration theater and professor of English at Fordham University.

According to Sherman, much of the innuendos and double entendres we use today have roots in theater. Shakespeare in particular "pack[ed] his plays" with sexual innuendos, much to the delight of his audience, who reveled in his bawdier jokes.

Eventually, Sherman said, innuendo made the leap from the stage to the streets, becoming part of contemporary Elizabethan conversation. Which makes some sense, when you think about it: Just as Twitter is one of the great social media platforms of our time, allowing phrases like "Netflix and chill" to take root and thrive, so too was the theater a social medium during the Elizabethan era, where audience members regularly congregated to meet friends, show off their outfits, gossip and flirt.

"Remember that [the theatre] was evenly lit, and in a horseshoe shape; everyone could see everyone," Sherman said. "And in-jokes of all kinds abounded; people would watch each other for their reactions to innuendo." Indeed, it's not a stretch to say the uproarious appreciation of innuendo in Shakespeare's time is today's retweet.

There's also another element at play in the "would you like to come up and see my etchings?" phenomenon: It requires that the asker have a removed space for their suitor to visit . And, according to Sherman, during and before the Restoration era, most people did not have access to any private space at all. In fact, he said that while Shakespeare and Restoration comedy abounded in sexual innuendo, almost none of it was in private. "All of the seduction happens on the public streets," Sherman said.

Here's the thing about private space: It was a rarity before the 18th century. Back then, even royalty had public rooms. "Kings and queens often had public levees where they would wake up in the morning and courtiers would attend to them in the room," Sherman said. "That's to say that there are walls and a door, but basically where we have separate rooms, they had huge public shared rooms."

Sherman hypothesized that both the "Netflix and chill" and "come upstairs and see my etchings" strategies require the use of such personal space. "The whole idea of 'come up and see my etchings' is the idea of private space, and that's what 'Netflix and chill' is all about," Sherman said. "If you could get someone in a private room, you can get someone in bed, and you've already established that that's what you want to do and that that's what you're going to do!"

Innuendo has clearly titillated us for centuries, and sexual invitations have existed as long as we've had private space, but the question remains: Why can't we just ask for a good fuck? Or, as Sherman put it, "Isn't it interesting that people would still want euphemisms of any kind at a moment when a kind of open, blatant language is available for sex?"

In a talk titled "Language as a Window Into Human Nature," Steven Pinker, a professor of psychology at Harvard University, posited a theory: Phrases like "want to come up and see my etchings?" and "Netflix and chill" stem from our need to shield ourselves from rejection.

"[T]here is something that is more comfortable about asking to see etchings than asking for sex," Pinker says in his lecture.

Pinker says even if the innuendo is obvious, we still feel more comfortable with hiding the meaning than with a "direct overture," or an out-and-out ask for sex. When someone rejects an ask, two people now know the truth: One person wants sex, the other does not. This creates obvious awkwardness and means that the two parties can no longer "maintain the fiction of a friendship." Much like the etchings invite, "Netflix and chill" puts the ice on an otherwise hot request.

The life span of a meme: If Google Trends is any indication, Netflix and chill has officially jumped the shark. Although the phrase was officially ensconced into the annals of meme history when it became an Urban Dictionary entry in April 2015, online searches of the phrase have all but dried up.

Eventually, we'll need a new, coded phrase to convince hotties to venture into our boudoirs. But ultimately, phrases like "Netflix and chill" and "would you like to come upstairs to see my etchings?" will never really die, as long as both our libidos and our inability to be direct about our true feelings live on.