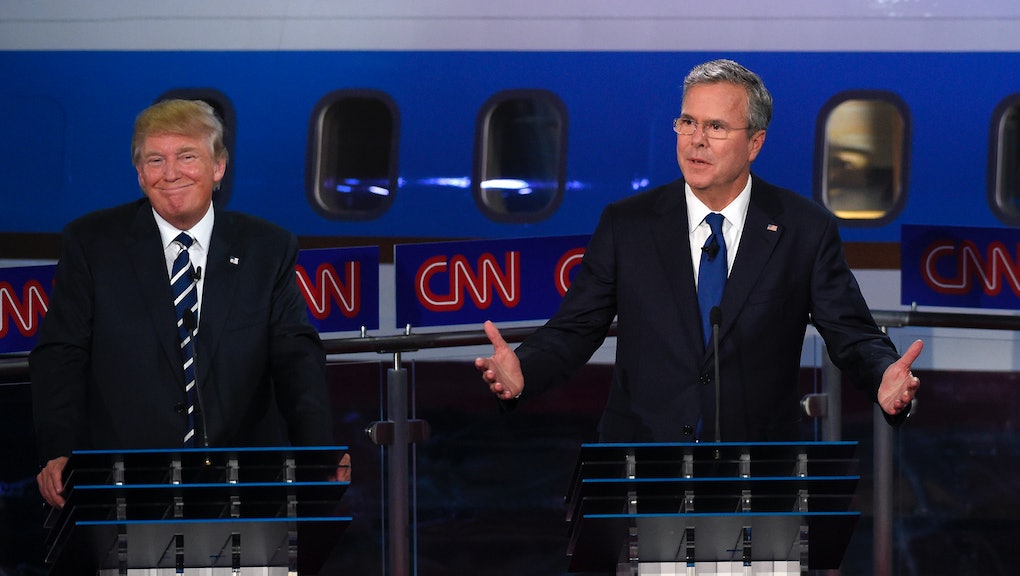 Donald Trump Has Backed Jeb Bush Into a Corner, Forcing Him to Defend His Brother's Legacy

Donald Trump is driving Jeb Bush down a dangerous road.

Trump's rise in the Republican presidential primary has been a consistent source of angst and frustration to the former Florida governor. But their latest tête-à-tête, rooted in Trump's insistence that President George W. Bush, Jeb's older brother, could have done more to prevent 9/11, has thrown the younger Bush into a tailspin.

Trump first poked at the wound Friday. "When you talk about George [W.] Bush, I mean, say what you want, the World Trade Center came down during his time," he said in an interview with Bloomberg. The Bush campaign reacted quickly, tweeting its outrage at what was an honest point by a trollish but equitable logic.

The initial bait snapped up in minutes, Trump has for the past four days continued matter-of-factly laying the traps, tweeting and subtweeting Bush and explaining how he would have gone about preventing the deadliest terrorist attack in American history. Bush has stepped, almost dutifully, into each one. With each response, he binds himself closer to his brother's broad and deeply troubled legacy — a series of tactical movements the Bush campaign sought to make clear from the outset it would do everything in its power to avoid.

Unraveling a narrative... and a campaign? No matter what he might say now, this was not the road Bush had planned to travel. That the campaign has gone this route at all speaks to a deeper dysfunction in his bid, currently manifesting itself in stagnant poll numbers and increasingly edgy donors.

Scrambling to gain a foothold among the Republican primary electorate, Bush now seems to be banking on what remains of the coalition that twice voted his brother into office. But as with the message he is repeating in response to Trump — close variations on, "My brother kept us safe," which he first uttered during the second GOP debate Sept. 16 — Bush is banking on the ghosts of 2004, when voters broadly rejected any suggestion that the president could be faulted for what happened 9/11.

Sure, the Bush administration had been warned, repeatedly, about the threat posed by Osama bin Laden and al-Qaida, but it was — and remains — difficult to park blame there. But this willingness to withhold such harsh judgment has never been enough. Many Republicans, particularly those loyal to the Bush family, have insisted on the construction of a more aggrandizing theory that argues, in essence, that because there were no comparable terror attacks on the U.S. after 9/11, that George W. Bush "kept us safe."

That assessment has been largely unchallenged in the public sphere, until now. Until Trump, who has become hell-bent on unraveling the Bush family and its allies' preferred narrative. Backed into a personal and political corner, Jeb Bush has responded by throwing himself headlong into a losing argument. Bush is matching Trump tweet for tweet, and, as if to prove he means business, breathlessly touting his brother's upcoming appearance on the campaign trail:

His "own man": George W. Bush left office in 2009 with a 22% approval rating, the lowest on recordfor a departing president. The economy was in shambles and two wars in Afghanistan and Iraq carrying on at a terrible and growing cost.

Though his standing with the public has improved since departing the White House — a common occurrence for retired presidents — the memory of George W. Bush's bloody foreign misadventures remains fresh enough that Jeb thought it necessary to declare previously that, "I love my father and my brother. I admire their service to the nation and the difficult decisions that they had to make. But I'm my own man, and my views are shaped by my own thinking and my own experiences."

That was in late February. While the statement might have sounded reassuring in the moment, the campaign's decision to unveil its foreign policy team, of which an estimated 19 had ties to the first two Bush presidencies, immediately raised eyebrows. They represented at least 19 reasons to be suspicious of this Bush's dedication to applying and adhering to a unique set of principles.

Whether Bush's decision to engage Trump on this hill is borne of familial pride, political calculation or some combination of the two, is open to debate. Running away from his brother's name after a jab from Trump is hardly a more appealing option, and could be the one thing to truly and finally damage Bush's standing with the Republican donor class.

Doing so would amount to a capitulation, but as he's proven over these past three days, Jeb Bush is not going away without a fight — under what banner and for what cause, though, is a growing mystery.