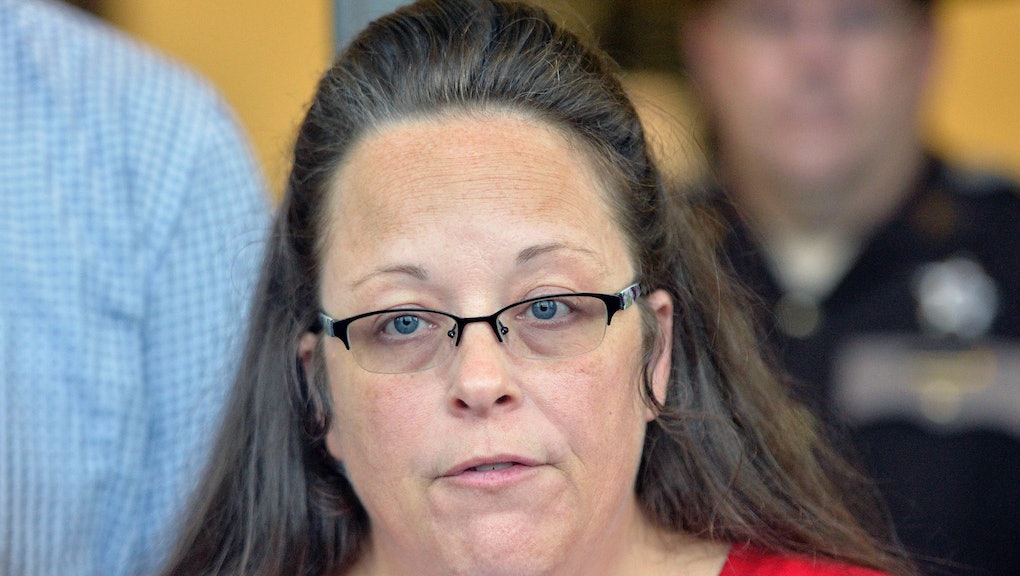 Westboro Baptist Church, best known for incendiary anti-gay rhetoric that has led to the congregation being labeled a hate group, followed through on its promise to protest Kentucky clerk Kim Davis' workplace on Monday.

Davis, who earned the ire of progressives and adulation of social conservatives for refusing to comply with a Supreme Court ruling legalizing same-sex marriage nationwide, though now married, has been divorced three times.

According to a link in the tweet below containing the lyrics to the song, the assembled members of the church sang Davis was "full of adulteries, constantly changing her name/ But she's still proud, and that's why the Christians are blamed/ And God hates her; she knows God hates her."

In a phone interview with Mic, WBC preacher Steve Drain said people like Davis "fashion morality from their own dark heart" and that the clerk "made a pretty big deal, a pretty public deal ... that she wasn't going to issue marriage licenses because it was immoral from a Bible perspective."

Marriage isn't like "a buffet where you pick what stuff you like but put the rest back," Drain continued. "The most important message in all of this is that the same God who said it's not OK to be gay also said it's not OK to divorce and remarry ... [Davis] with the same force turns around and acts like she's gonna speak for God. She's a fraud as all lukewarm Christians are.

"She should close her mouth and go about her business, but she does not," Drain added. "Just look at the Bible, man. Just read the words. That's the standard. It's God words ... not everything's hard to understand. Some of it's real easy ... there's not much interpretative message there."

Drain said by violating the Biblical prohibition on divorce, Davis joined the ranks of people who "hate the word of God." He also called her meeting with Pope Francis earlier this year "ridiculous."

While the preacher declined to say how many church members attended the protest, he said the publicity from the event would reach "millions." The Courier-Journal reported the total number of protesters was four, all individuals associated with the church.