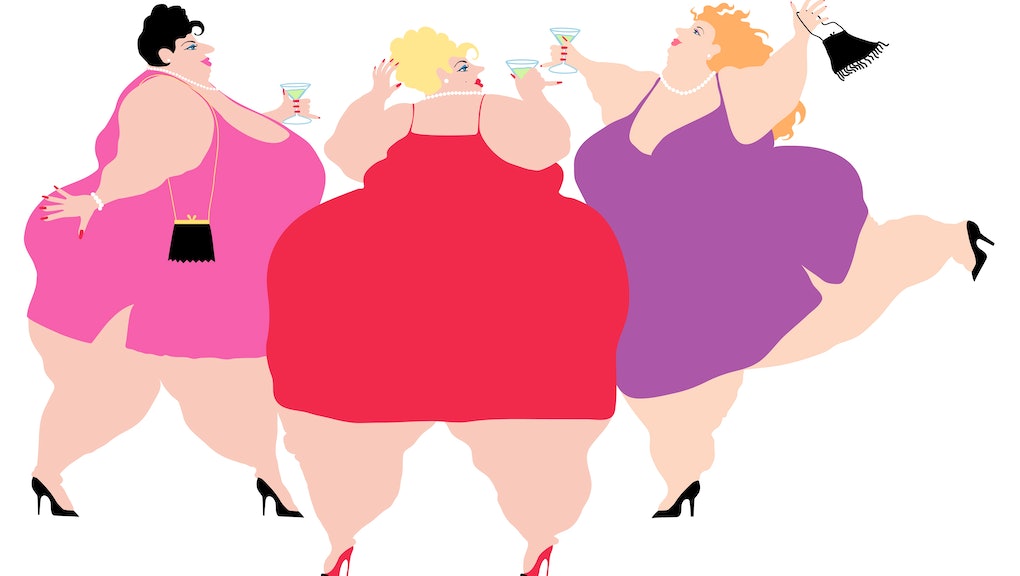 "Especially back then, being overweight meant being invisible," my mom recently explained to me during a drunken trip down memory lane.

Every so often, Maureen and my mom would hit up the party circuit as a way to meet men who were on the prowl for BBWs. What followed for my mother was a string of toxic relationships with cheaters, users, men who kept her a secret and men who were just plain stupid. The men Maureen typically wound up with weren't any better, but she didn't seem to mind.

"Women putting that energy out there resulted in a lot of assholes showing up, looking to get laid for the night, thinking we'd be desperate or easy," she told me. "If you wanted to actually connect meaningfully with someone? Have them take you out in public? Meet the family? Have a healthy relationship?

"Being overweight always meant being invisible."

One episode of Ally in particular resonated with me. It was called "The Promise," and in it an obese lawyer named Harry falls in love with Ally, despite the fact that he's already in a relationship with Angela, his also-overweight fiancée. "She's never made my heart bounce," Harry laments to the pretty, slim Ally, adding that he has never found Angela sexually attractive.

After Ally rejects him (expressly because of his weight), the two discuss whether or not it's OK to settle for someone just because they're your only option. While Ally believes that Harry shouldn't settle, by the end of the episode Harry and Angela end up marrying anyway, despite the fact that they're only together because neither think they can do any better.

When it comes to love, fat people have to settle for what they can get.

Today, my mom and I are both outspokenly body-positive and strong supporters of the idea that fat people deserve to love themselves and be loved. But that self-acceptance comes with a caveat: We're both no longer fat. She eventually cut out carbs and sugar to gradually drop 80 pounds, and I grew up to be gay, which meant de facto membership to a community that propagates wildly unattainable body standards. Even Fat! So?-wielding Maureen decided to get gastric bypass surgery.

As someone who has been both fat and thin, I would be lying if I said that there aren't privileges that come with navigating life as the latter. I can catch a dick on Tinder without too much effort, indulge in the occasional donut without being judged and partner with a boyfriend that, as Harry from Ally McBeal would say, "makes my heart bounce." As a result of my thin privilege, I feel confident about my body, but I can't say I don't feel guilty about that.

In an ideal world, we'd all have the unabashed self-assurance of body-positive champions like Tess Holliday and a pre-surgery Maureen, who have high self-esteem without needing external validation. But the world we live in now makes that possible for only the most sure-footed and DGAF fat people among us. That's why we need to continue relentlessly promoting body-positivity: Because until it's universally accepted that fat people are people who deserve love and respect, feeling confident about our bodies will forever be an uphill battle.

"The craziest part about it is that I'm the same exact person I was 80 pounds ago," she says. "But they wouldn't know that."