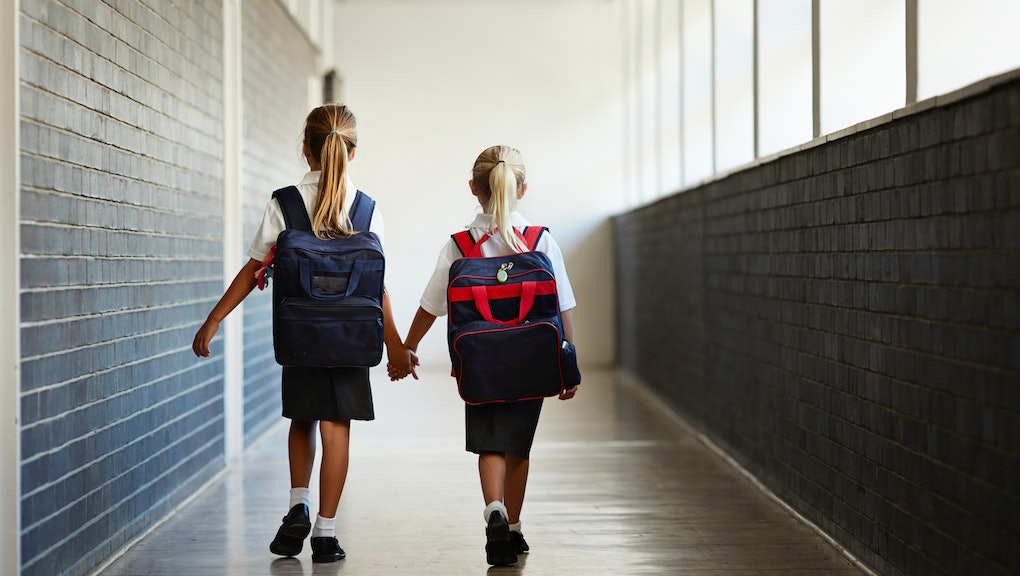 Awful News for Everyone Who Carried a Heavy Backpack in School: It Made Us Shrink

We heard throughout our formative years that lugging around a heavy backpack was terrible for our backs. But now that we're older, the damage may have already been done — and we may even be shorter because of it. The textbooks we carried to class have literally made us shrink.

The pain starts in middle school. A 2010 study in the National Center for Biotechnology Information, which studied a small test group of children around the age of 11, found that the constant weight of the bag was actually causing spinal cords to compress and cause significant back pain. Those test backpacks were, at their heaviest, about 26 pounds.

Dr. Harvinder Sandhu, a spinal surgeon at the Hospital for Special Surgery in New York, says 26 pounds is on the lighter side. "Schoolchildren these days are carrying these huge backpacks with around 40 to 60 pounds of weight," he told Mic. "Seemingly they think it's only for a short distance. But when you add it up, the total weight is enormous."

How much of a strain is that weight, exactly? Here's an example: Say you're a high schooler in some advanced placement classes. Each of your textbooks is roughly 5 pounds, and you have one for each of your seven classes. You have a locker, but it's on the fourth floor and all of your classes are on the first and second floors. You are, on any given day, carrying a 40-pound backpack, maybe more if you've got school supplies in there. If you weigh somewhere between 105 and 115 pounds, your backpack is nearly 40% of your body weight — around twice of what the NCBI study estimated as fit for testing.

For an adult weighing around 160 pounds, that's the equivalent of walking around all day with a golden retriever hanging from your shoulders.

That NCBI study also tested the Cobb angles of its subjects. Cobb angles are the angles between the edges of the vertebrae that can be used to show where there's risk of scoliosis, or a sideways curve in the spine. Think of an X-ray: When you look at a skeleton from the front, a normal, healthy spine should be straight up and down. The Cobb angles in a healthy spine will be less than 10 degrees — mostly undetectable. But when that number rises, you're facing trouble.

When the Cobb angle is between 10 and 20 degrees, the signs of scoliosis are detectable but generally don't require treatment in someone who's reached adulthood. In a child, however, progression becomes an issue. "That might require the use of a brace, or at least close observation," Sandhu told Mic. "But beyond 40 degrees, you're more likely to continue progressing, even as an adult, to the point you'd require surgery."

Of those eight test subjects in the NCBI study, four had Cobb angles greater than 10 degrees — and they were only carrying backpacks weighing between 13 and 18 pounds.

Even if your spine stays straight through years of hauling your life on your back, compressing the spine by carrying a heavy backpack can actually affect how tall you'll grow to be — and how tall you'll stay.

There are bones in your lower spine called lumbar disks. When we're young, the disks are full of water, which makes our spines move more easily. The disks contribute to about an inch of our height. As we age, that water starts to dry up. It's why, as Sandhu describes, between the ages of 20 and 60 we're likely to lose an inch to an inch and a half in height from that water leaving your spine. That's just normal wear and tear.

When you add an extremely heavy backpack, five days a week for over a decade, we're basically crushing those water-filled gaps, compressing the spine with all the extra weight. A backpack accelerates the rate at which we lose water in the lumbar disks, causing us to shrink a little bit more quickly.

"You lose disk height from prolonged damage," Sandhu told Mic. "When it loses water content, it begins to shrink." Think of driving a car with an underinflated tire. "You can still drive the car, but the tire is becoming sloppy," Sandhu said. "You wear the tread down. It's the same with disks: If they're under mechanical stresses, they'll get damaged much faster."

Your spine isn't all that's in jeopardy. The soft tissue around it — supporting structures like ligaments and paraspinal muscles that attach to the spine — suffer a decreased range of motion. Like construction workers who frequently lift heavy loads, our bodies experience tendonitis, degenerative disc disease and back pain.

According to Dr. Nathan Wei, a rheumatologist at the Arthritis Center in Frederick, Maryland, carrying around a 40-pound backpack can lead to the inability to rotate your neck and move your shoulders in a full circle.

"A lot of neck and shoulder discomfort that occurs initially is episodic," Wei told Mic. "But if you chronically stretch the muscles with the associated ligaments attached to the bone, it can become chronic."

When the pain becomes chronic, Wei says it takes roughly a month of treatment, using everything from physical therapy and anti-inflammatory drugs to relearning correct posture — and that's after just a year of frequently carrying a heavy load.

Dr. Robert Marx, an orthopedic surgeon at the Hospital for Special Surgery, primarily does surgery on knees. He says his work goes to waste when people can't reduce what they carry around. "I frequently see people going back to work and delaying their recovery by carrying heavy bags," Marx told Mic. "It can cause the operated knee to swell or become sore and make physical therapy more challenging. In this case, even a backpack puts more load on the knee after surgery and it can be detrimental."

Sandhu and Wei both referenced 40 pounds as a common backpack weight, though the kids who carry them may be outliers. Even if the average backpack weight is closer to 25 pounds, there's still a major risk. But if we can't convince kids, and their teachers, to help find ways to lighten their loads, we need to figure out how to make it safer to carry multiple textbooks.

Even then, the safest alternative isn't always the trendiest option for a 14-year-old. "One of the best things ever created, in my mind, are rolling bags," Sandhu told Mic. "I wish young people would use them, but it's not the cool thing to do in school."