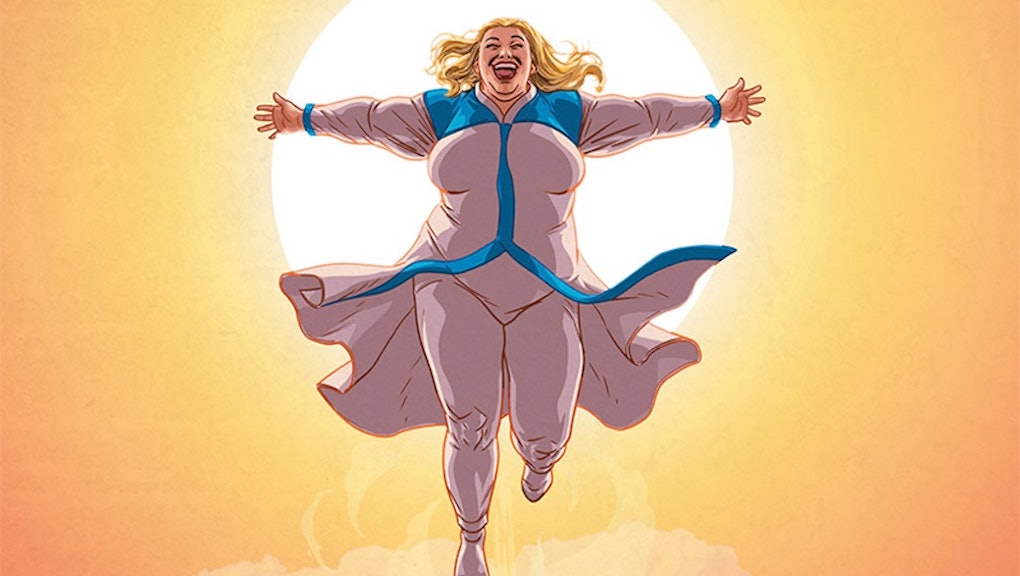 Harbinger, a comic book series about super-powered but socially challenged teenagers, has been penned by men and centered on male characters since the early '90s. In a few months, however, the series will get a female-powered breakout: a spinoff miniseries featuring a bold, full-figured female protagonist Faith, a Harbinger ensemble character, written by acclaimed comics writer Jody Houser.

Faith is an affront to the comic book industry's status quo, which often renders female characters as hypersexualized objects who exist to please and support male heroes, if they're not excluded altogether. It's a change for which Hauser said readers are more than ready.

An authentic, female heroine: Valiant editor-in-chief Warren Simmons describes Faith as "one of the most unique characters in comics — a sci-fi loving, Firefly-quoting fangirl" who, when given the chance to stand alongside other superheroes, ends up proving herself "to be the bravest of them all."

Houser agrees. Faith's authenticity makes her particularly likable and relatable, she told Mic. The protagonist, a "superhero fan" herself, is enthusiastic in "embracing her powers and her determination to help others," and is like "the real-life geek friends we all have instead of a stereotype of a comic fan or a plus-size woman," Houser said. While Faith isn't hypersexualized, she's "still allowed to be sexual," Hauser added, noting that Faith has an intimate relationship in the series.

And, yes, the fact that Faith is full-figured in the context of a "medium with very little diversity in women's body types," can't be overlooked, Houser said. "Faith proves that not only can a woman carry her own superhero comic, she doesn't have to have an idealized body type to do so."

A broader move toward diversity: Featuring an authentic female protagonist isn't only about inclusivity. It's common sense. Research shows women compose nearly half of all comic fans. Yet, Houser said, women aren't the only readers who will benefit from Faith.

"I think there's a misconception that men aren't interested in stories about women acting as people as opposed to sex objects," Houser said. She has found this is "untrue for the vast majority of guys" and predicts not only will male readers continue to support female-driven comic books when given the opportunity, but so will the industry at large.

"Change is something we're very much in the midst of," Houser said. A new, rising generation of editors and creators "want to see the industry become a place where everyone is welcome" and "the number of women working in comics can't be ignored anymore," she said.

"There is room for all kinds of superheroes, not to mention a huge variety of stories in the medium itself," Houser said. "In the long run, comics have to embrace more diverse storytelling and readership if the industry is going to continue to thrive."

Faith is available for pre-order and will be released in January.