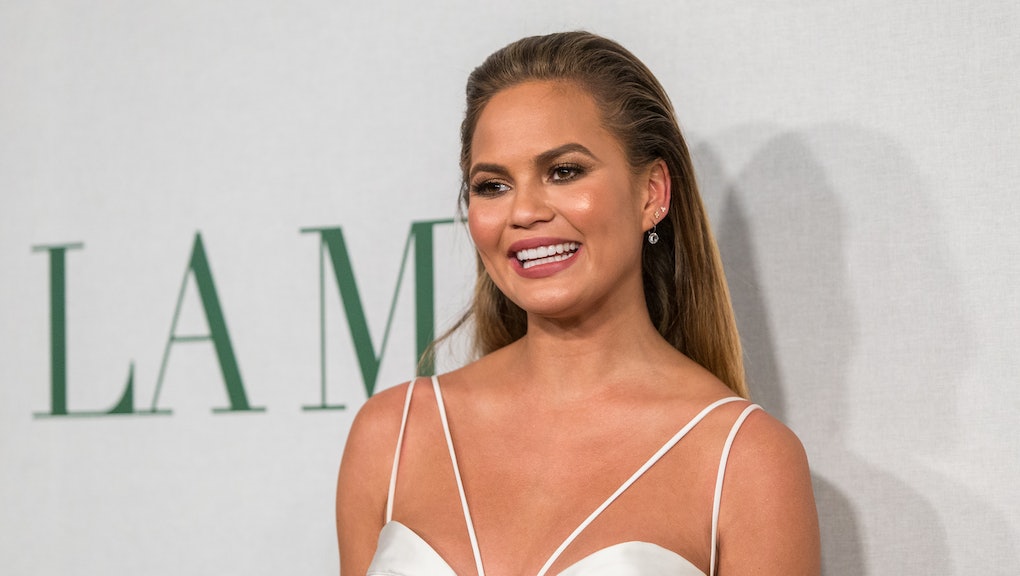 In yet another series of social media maneuvers proving Chrissy Teigen is a gem and a half, we have some recent tweets in which she tells a gaggle of nosy lil' Twitter trolls to "get out of her uterus."

It all began when Teigen posted a picture of her burgeoning baby bump on Instagram:

While some fans reacted to the pic with a bonanza of "aww"s and "yay!"s in response, others went Sherlock Holmes on the model's reproductive system, speculating on the most private details of her pregnancy. "yup it's definitely twins," one Twitter user wrote. "The bigger the bump the bigger the surprise." Another chimed in: "@chrissyteigen damn you go big fast! My bestie is due in Feb and she's 1/2 your size. Not twins? Probably triplets!"

Unsurprisingly, Teigen, who has gone on record saying she isn't thrilled when people ask her invasive questions about her reproductive status, wasn't happy. She promptly began posting the (now-deleted) tweets with unimpressed emojis.

She then tweeted that perhaps the invasive questions were a result of karmic retribution due to her past obsession with other women's pregnant bellies.

Despite these impassioned remarks, some of Teigen's followers just couldn't let it go. They had questions. They had theories. They had tweets!

So then finally she was just like, "Screw it" and made a pact with herself to only tweet about food/reality television/hay from here on out.

You see what happens when you interrogate women about their uteruses, Twitter? This is why we can't have nice things (such as pregnant Teigens who tweet about being pregnant Teigens).

But to be serious for a moment, this incident has quite a few unsavory hints of the body policing that can be a serious issue for many women once they become pregnant, particularly celebrities like Teigen.

As writer Sarah Sahagian wrote earlier this year in a post titled "Kim Kardashian and the Policing of Pregnant Women's Bodies": "Pregnant bodies are policed bodies. Pregnant women are told they cannot drink, eat soft cheese, enjoy sushi, etc. They are also told not to be too intense about their workouts or too restrictive about their diets, and then in the next breath they are told not to gain more than 20 pounds."

That shit's not OK, and we're glad Teigen is here to call it out. So if you're preggo and you ever find yourself confronted with a person who gets a little too invasive or police-y with their comments on your baby bump, just repeat after Teigen:

And then go back to what really matters in life: Food. Reality TV. And, sometimes, hay things.