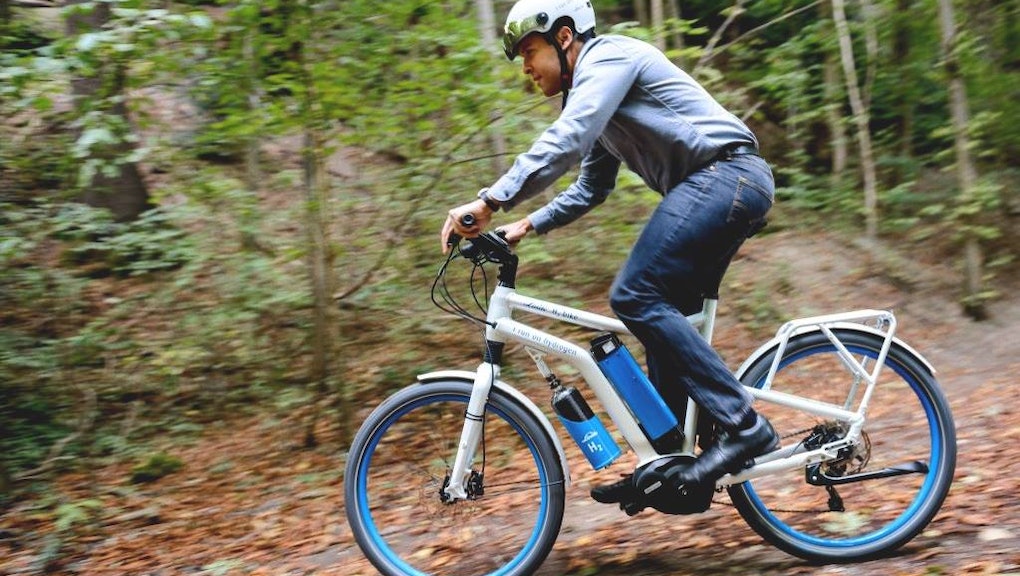 In 1937, the Hindenburg airship exploded over New Jersey, killing 36 people when, researchers believe, static ignited hydrogen leaking into the ship's ventilation shaft. It was a historical display of the dangers of hydrogen fuel. Eighty years later, technology has come a long way.

A new electric bicycle from energy mega-corporation the Linde Group will use a small tank of hydrogen and a tiny fuel cell to propel you. The Linde H2 bike will roll out over the next few months in a small, limited prototype trial to test the viability of a hydrogen-powered bike.

Using a small fuel cell that Linde says charges in five minutes, the Linde H2 provides electric power for assisted biking for over 62 miles. When the assisted biking mode is on, hydrogen pours into the fuel cell, which uses the air surrounding the bike to generate an electrical charge, according to a press release.

The Linde Group also said in that release that it has built about 100 hydrogen fueling stations throughout Europe, as auto manufacturers begin looking into hydrogen as a sustainable fuel.

The case for hydrogen: It's a zero-emissions fuel with a bad reputation. Hydrogen is nontoxic, odorless and holds 10 times as much energy by weight as petrol fuels.

But many people are terrified by the idea of a hydrogen tank, because hydrogen is highly flammable. Cars that have been designed with hydrogen fuel cells have been heralded as potential bombs ready to detonate. Still, hydrogen advocates say that fuel cells are much safer than they were when the Hindenburg exploded, and that with some safety standards, hydrogen could be made safe for industrial and commercial use.

"There's nothing special about hydrogen that sets it apart from any other flammable gas," chief Jan Dunbar of the California Office of Emergency Services told ProPublica.

Besides, there's a big incentive for hydrogen fuel to become more commonplace: It can supposedly power our phones for an entire week.