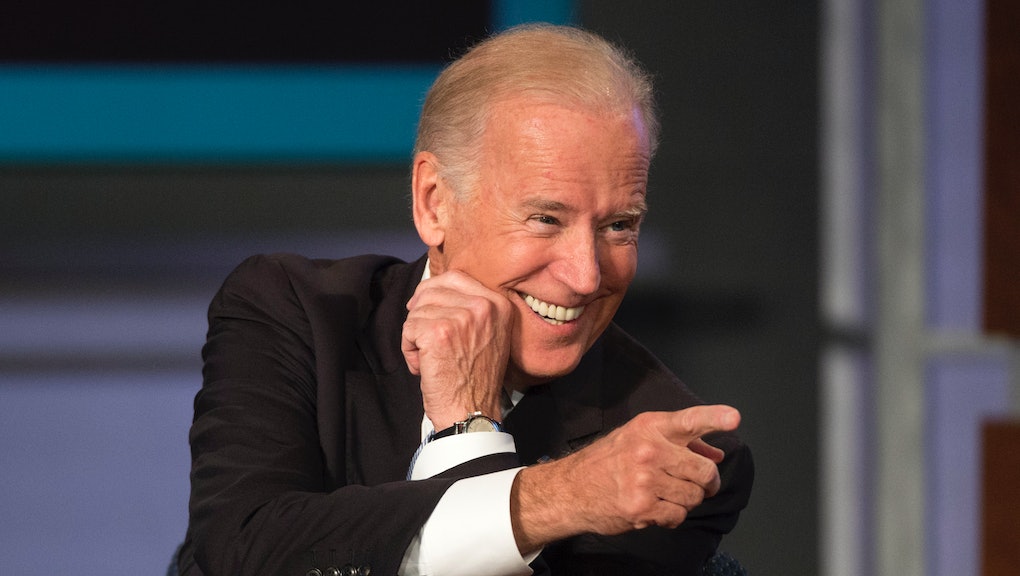 Joe Biden Really Sounds Like Someone Who Is Running for President

Vice President Joe Biden has been agonizing over a run for the Democratic presidential nomination for months now, but with one debate already gone and the other candidates steadily building support and reinforcing campaign apparatuses, the time for a final decision is near.

On the other hand, maybe he has already decided.

Over the past 24 hours, at least two people who might know — Fox News chief White House correspondent Ed Henry and Rep. Brendan Boyle (D-Pa.) — have said they were told the vice president was preparing to join the race. Biden himself has been talking plenty, but has remained largely silent on his future plans.

So we're left to continue on reading the tea leaves. During a panel discussion with former Vice President Walter Mondale on Tuesday, Biden dropped several hints about what a potential candidacy might look like.

Though he did not hint about his choice or when he might announce it, Biden didn't simply "sound like a candidate" — he sounded like a candidate very clearly attempting to edge out a rival, Hillary Clinton. He nimbly poked at his former colleague with a handful of ostensibly offhand comments that just so happened to answer potential criticism while drawing himself closer to President Barack Obama, who remains popular with Democratic primary voters.

Surprise! Biden was totally in favor of the bin Laden raid.

This one is grabbing headlines. The question of whether to launch a special forces raid on Osama bin Laden's compound in Pakistan in 2011 was thought to have caused a sharp division in the Obama administration. The intelligence community was not 100% sure the target was in fact the terror leader's compound, and there were doubts about the wisdom of sending troops deep into Pakistan to find out if it was.

For the past four years, Biden has been cast as one of the doubters who cautioned against military action, and publicly recounted his skepticism. Clinton has happily touted herself as one of the mission's strongest backers, claiming in an interview in July that "I was one who recommended to the president that he go ahead."

On Tuesday, however, Biden added a wrinkle to that narrative, changing his story to claim that he had told Obama in private that he should approve the raid while casting a skeptical eye in front of the rest of the national security team.

"I said I think we should make one more pass with another UAV (unarmed aerial vehicle or drone) to see if it is [Bin Laden]," Biden said, claiming that this was not his real opinion. "The reason I did that," he continued, "is I didn't want to take a position to go if that was not where [Obama] was going to go."

Biden called Clinton a "great" secretary of state. But not, by pretty clear implication here, the real voice of the Obama administration overseas.

Just in case that wasn't clear...

Clinton traveled to a record 112 countries, but Biden, as he noted, knew many of their diplomats before, when they ascended to leadership roles, back when many were just low-level ministers or parliamentarians dreaming of higher office.

If you like Obama, Biden wants you to know this.

Any differences, Biden said, came down to questions over tactics. That included when he got out ahead of the White House during the 2012 re-election campaign to declare his support for same-sex marriage. (Incidentally, that was about a year before Clinton did the same.)

Again, to be clear, Biden is really happy he chose to work for Obama.

If Biden does decide to go ahead and launch a bid, he should probably get started soon. Despite having polled well for a non-candidate, his numbers are beginning to stall in the latest round of post-debate surveys. Still, he would enter the contest with a solid base of support and, as made pretty clear on Tuesday morning, an impressively refined game plan for mitigating Clinton's ready-made attacks.