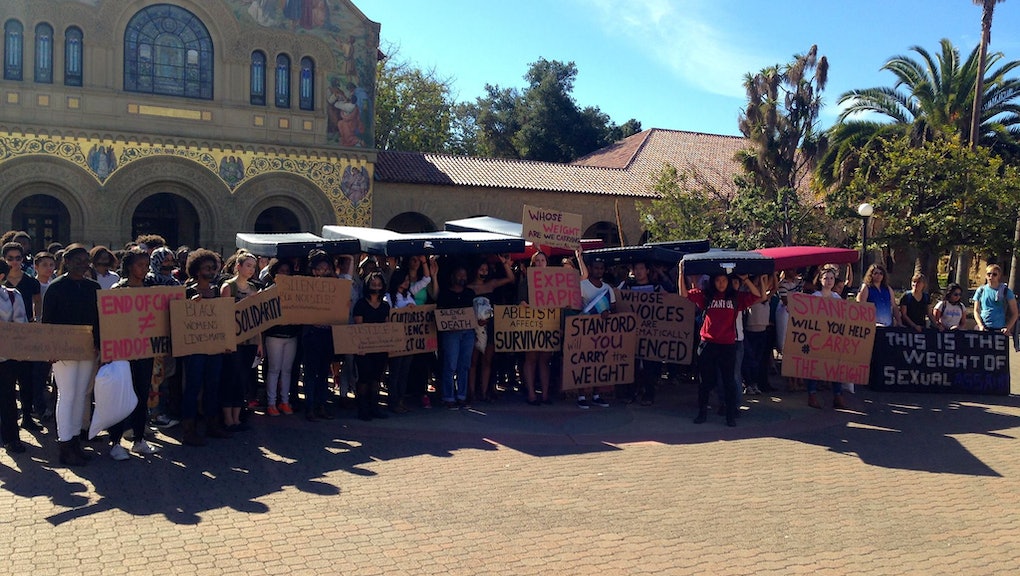 Elisabeth Dee is a Stanford University junior. Each day, she and more than 16,000 other Stanford students traverse campus, situated in the rolling foothills of Palo Alto, amid lush lawns and towering palm trees. On the surface, there's little not to love. The campus is one of the country's premier research hubs and feeds directly into the surrounding Silicon Valley.

Perceptions can be misleading. Dee is also a survivor of sexual assault. She carries a knife, whistle and stun gun everywhere she goes on campus. She says she's had to use all three in the past in order to stop perpetrators.

"I'm a student who lives on this campus feeling unsafe every day," Dee told Mic. "Stanford claims to be this mecca of innovation and free thinking, but we're regressing, frankly."

She isn't the only one who feels not all is well on the Farm, as the school is affectionately known to students. (Full disclosure: The writer graduated from Stanford in 2009.)

The background: Dee's feeling of frustration partly stemmed from Stanford's release of its Campus Climate Survey in early October, which found an average of 1.9% of students have been sexually assaulted on campus. The figure, taken from 9,067 respondents and sent to 15,368 students, is featured throughout the 35-page report.

The report also highlights other statistics, including the 32.9% of undergraduate women who reported experiencing sexual misconduct.

Activists like Dee and other students and faculty allege the figure is misleading. "I was struck first by the low number that was being highlighted by the university," Stanford law professor Michele Dauber told Mic. "I thought it must be some mistake. Students feel angry and confused. Faculty collectively rolled its eyes. It's not credible."

The controversy: Dauber served as the co-chair of the Board on Judicial Affairs from 2011-2013 and has helped revise Stanford's policies on sexual assault. She and others take issue with Stanford's decision to present the number as an overall percentage of all respondents, rather than focusing on undergraduate women, who are disproportionately affected by sexual assault.

In fact, the largest subgroup who filled out the survey was graduate men, who were less affected by sexual assault than any other group, according to the survey. "Averaging them all together is uninformative at best, and misleading at worst," Dauber said. "The average length of a human neck is six inches, and a giraffe neck is 18 feet. I could average them together and give you an average length of a neck, but it would just be misleading."

She also disagreed with Stanford's decision to use a narrow definition of sexual assault. The school's definition is based on California's criminal rape and sexual offense statutes and restricted to "penetration without consent and/or oral sex without consent and when the respondent indicated that the act (or attempted act) was accomplished through threat of force violence, force and/or when the respondent was incapacitated."

In contrast, 27 other universities, including peer institutions like Harvard and Yale universities, took part in a survey organized by the Association of American Universities which used a broader definition of sexual assault as any form of nonconsensual sexual contact, including sexual touching, attempted penetration and completed penetration. Stanford's definition of assault does not include sexual touching accomplished through force or incapacitation. Stanford was one of only a handful of top-tier schools, including the University of Chicago and Rice University, that opted to forgo the AAU survey in favor of its own. Not surprisingly, the AAU survey found a much higher average rate of sexual assault, at 23.1% for undergraduate women.

University spokeswoman Lisa Lapin disputes both claims. "Ironically, some activists have given much more attention to the 1.9% figure than the university," she told Mic. "The university provided the aggregate experience of all Stanford students for the most serious offense, sexual assault as defined by California law, as well as a host of other data for different subgroups, all in very short succession. The university was not seeking to highlight any one number, but provide all of the data from what was one of the most comprehensive surveys undertaken by any university."

"At the time Stanford was developing its survey, the AAU survey mechanism was not completed and the AAU could not tell us when and how we would receive their data," she said. "So we developed a survey in conjunction with several other institutions — Chicago and Rice — based on the experience of MIT, which was the first institution to go forward with a survey."

The reaction on campus: But students say the survey represents backsliding on the part of the university to address sexual assault. Tessa Ormenyi graduated from Stanford in June and served on what is now the Office of Community Standards committee. "People working in student groups and survivors have called me saying, 'I don't know what to do with this number. No one is going take me seriously anymore,'" she told Mic. "There's an increased climate of fear that the university won't respond well or won't do the job of implementing education measures that they need to do."

Ormenyi was one of the lead organizers of the "Stand With Leah" protests, which broke out in June 2014 after senior Leah Francis sent an email that quickly spread on campus, declaring, "Stanford did not expel the man who raped me." She criticized the university's review process and the punishment of her rapist, which was a five-quarter suspension. Ormenyi still manages the group's Facebook page. She responded to the survey by publishing her own press release, in which she claimed a total of 43.3% of female undergraduate seniors have experienced some form of sexual assault or sexual misconduct on campus, calculated by adding the number of senior women who reported sexual assault and sexual misconduct based on the university's survey data.

Stephanie Pham, a sophomore, said she is concerned about the message the survey sends to freshmen women in particular. "The administration tried to create this image that Stanford is this very safe place where sexual assault doesn't happen and that is so false and has so many consequences," she told Mic. "So now these poor freshmen are going to think there's way less risk than other colleges, so they are not going to be as safe."

Pham has spent the past several weeks distributing fliers to educate students about the risk on campus and she is planning to start a club devoted to educating students around the dangers of sexual assault.

The broader context: A series of high-profile sexual assault incidents have rocked the school since 2014. In addition to Francis' case, Brock Turner, a freshman swimmer, was charged with raping an unconscious woman outside the Kappa Alpha fraternity. He was spotted by two cyclists, who chased him and held him down until police arrived. He is currently facing three felony counts of sexual assault. He withdrew from the university after the incident, but he was not expelled.

In another instance, Sigma Alpha Epsilon lost its housing indefinitely after harassing a female junior Tess Bloch-Horowitz (no relation to the writer) whom they believed reported the fraternity to the Title IX office for graphic comments made about domestic abuse at one of their events. Lines at that party allegedly included: "What do you tell a woman with two black eyes? Nothing, you've already told her twice." "What do you call the useless skin around a vagina? A woman." "What do a woman's orgasm and her opinion have in common? No one cares about either."

What students and faculty want from the administration: In an email sent to the entire campus community alongside the climate survey in early October, Stanford president John Hennessey and provost John Etchemendy were unequivocal in their commitment to tackling this issue.

"The results show clearly that we have much more work to do in battling sexual assault and sexual misconduct at Stanford," they wrote. "About 2% of Stanford students surveyed, and just under 5% of undergraduate women surveyed, reported experiencing an incident of sexual assault as defined by Stanford policy during their time at Stanford. To us, any number above zero is unacceptable."

Etchemendy also assembled a task force in summer 2014, devising a set of recommendations for how Stanford can reform its procedures around sexual assault.

But students and faculty told Mic they want to see Stanford go even further.

Dee said Stanford should reissue the climate survey in accordance with the AAU. Lapin dismissed this concern, telling Mic, "There is no need. Our report provides all of the data to students and the public, by every category and subset of student population."

More broadly, Dauber has called on the university to reform its judicial review process to make offenders more accountable for their actions. According to data Dauber compiled and provided to Mic, there have been 280 reported sexual assaults at Stanford since 1997, of which only 18 cases have been adjudicated by the Office of Community Standards. Only 10 students have been found responsible, and one student has been expelled for sexual assault.

"There's no way you can look at those numbers and think everything is awesome," Dauber said. "It is absolutely imperative to have a process that results in removing people from campus permanently when they have committed serious sexual violence. They are a threat to the community."

Although this issue is getting more attention on campus, with several stories in the Stanford Daily this month, Pham said the administration should provide more resources for sexual assault prevention and better bystander intervention education for students. "That climate and that discussion isn't really being fostered by the administration right now," she said.

What students are doing about the problem: In the meantime, students like Dee are taking matters into their own hands. Dee is organizing a teach-in on campus to educate students about the meaning of the climate survey. She has also been meeting regularly with a group of survivors, activists and students from SAE to discuss sexual assault openly.

"This issue is often framed as the crazy feminazi activists versus the rowdy jocks and frat boys," Dee said. "That dichotomy will get us nowhere. So we've had these meetings that are very emotional, but we've had moments of breakthrough."

Seniors Hannah Long and Tanvi Jayaraman are co-chairs of the Sexual Assault Prevention Committee on the Associated Students of Stanford University cabinet. They told Mic that they are organizing a series of events to create dialogue on campus, including an open mic with the Stanford Spoken Word Collective to provide a space for sharing experiences on a host of issues surrounding sexual assault.

If any university can devise solutions to campus sexual assault, Ormenyi said she is convinced Stanford can leverage its entrepreneurial ethos and iconic Silicon Valley status to tackle this issue head on. Entrepreneurship is practically in the school's DNA. Students take great pride in being part of a community that's given birth to tech titans like Google, Yahoo!, Instagram and Snapchat.

"We're Stanford, we can do this," Ormenyi said. "It's not something that's insurmountable."