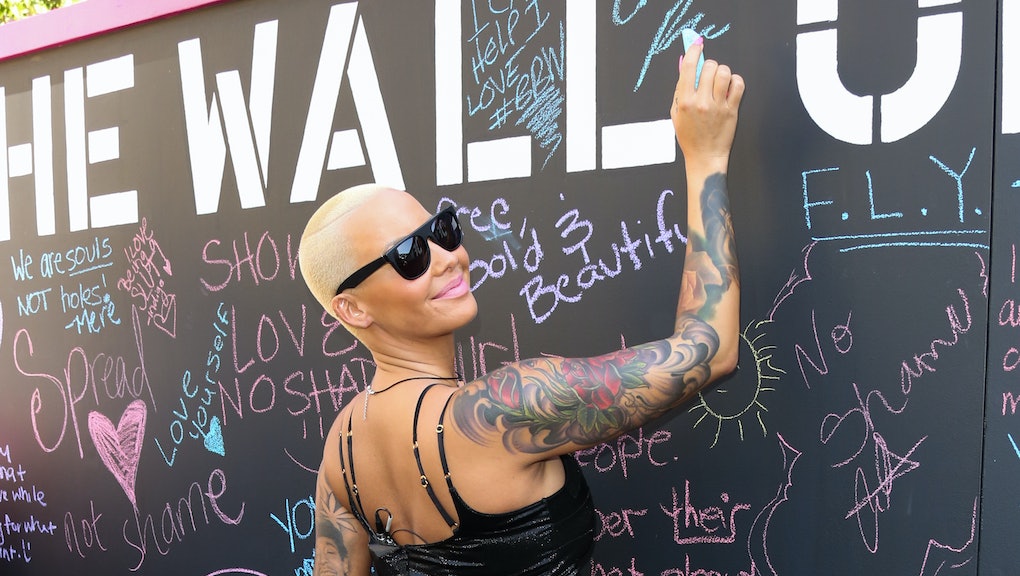 Amber Rose is so not here for even the most low-key forms of slut-shaming, and it is glorious.

In a recent Instagram post, the DGAF goddess had harsh words for GQ after the magazine profiled her to promote her new book, How to Be a Bad Bitch. Rose took issue with the subhed of the piece, which described her not as a model or author or the founder of the anti-slut-shaming protest SlutWalk, but as "Kanye's infamous ex" and "Wiz Khalifa's baby mama" who had a "beautiful dark twisted journey to the top" (an obvious reference to West's album My Beautiful Dark Twisted Fantasy).

Rose wasn't having any of it. "Really @gq??? I'm so much more then Kanye's ex or Wiz's baby's mama," she wrote on Instagram, alongside a screenshot of the offending paragraph. "Damn, why the fuck did u guys reach out to me for this article and photoshoot? To dumb me down?"

She added, "Wtf nice title smh I expected so much more from u guys and I'm so disappointed. I was so excited to be featured in GQ not realizing I was shooting for a tabloid. My slutwalk was for ignorant shit like this. Oh 'Her beautiful dark twisted journey to the top'? Nice pun. Negative af. Thx for nothing."

This is hardly the first time Amber Rose been subject to such reductive descriptions of her sexuality. Previously, she's called out Instagram followers who've accused her of being known only for her history of "fuck[ing] rappers," At her SlutWalk in Los Angeles earlier this month, she broke down when recounting how ex-boyfriend West had made denigrating comments about her on a radio show.

"I was extremely slut-shamed, [he said I was] 'nothing but a stripper, why would he ever be interested in me, I'm just a bald-headed stripper from Philly,'" she said. "I was a gold-digger, apparently you had to take '30 showers after being with me' ... I decided to have this slut walk for women who have been through shit. And even though I'm out here crying, I want to be the strong person that you guys can look up to."

In the GQ article itself, Rose discusses at length why she takes issue with being described as a woman who only "fucks rappers," particularly in light of her other accomplishments: She's a model, actress, activist and fashion designer, as well as the mother of a 2-year-old son with ex Khalifa.

"She's on a mission to prove that there are more interesting things about Amber Rose than her entombed romance with the most interesting man in culture," writer Carrie Battan writes for GQ. "After years of living as hip-hop arm candy and clickbait fetish object, she's emerged, defiantly single-ish and eager to spread her womanly gospel."

Rose goes on to make several points in service of her anti-slut-shaming mission throughout the interview, addressing the accusation that men might only follow her on Instagram because of her famous exes.

"It's a fair point," she told GQ. "I get it. But now that you're here, we're gonna really talk about slut-shaming. I really want you guys to sit down and think about the act that your mother had to do with your father in order to have you. Really, fully understand that your mother is a sexual being. Is she a ho?"

As someone who has been consistently slut-shamed and reduced to the trope of "dirty ex" and "baby mama" time and time again, it's nice that Rose finally has platforms like GQ from which to get her anti-slut-shaming message across. But as Rose made painfully clear in her Instagram caption, it would be even nicer if the final product was packaged in less of a — well, slut-shaming way.