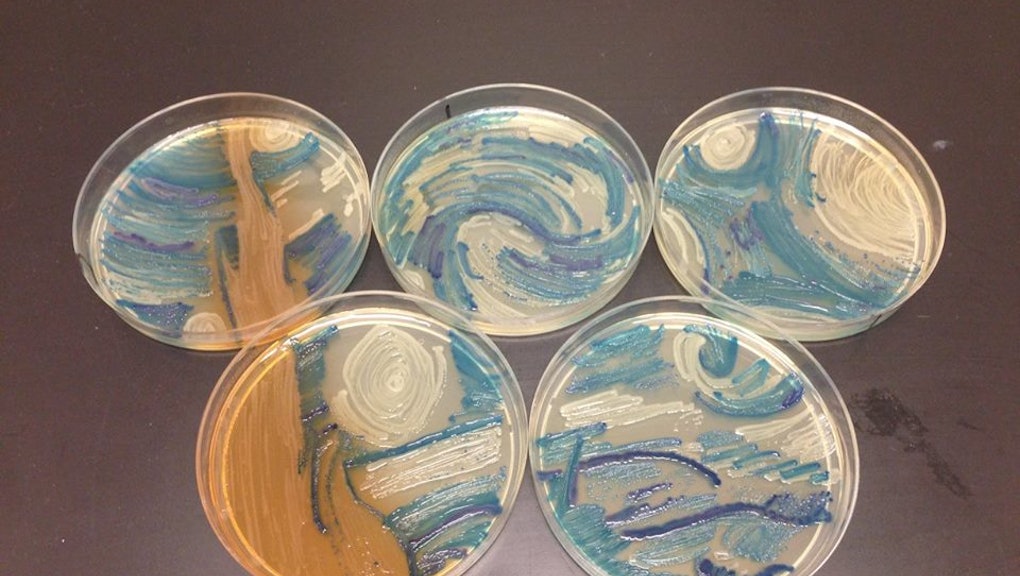 Microbiologist Melanie Sullivan submitted the following creation to the American Society for Microbiology's first ever Agar Art Contest, named for the substance used in Petri dishes to encourage bacteria growth:

The contest, held throughout September, encouraged participants — anyone with an ASM membership was eligible — to marry the arts and sciences using only a Petri dish. The judges included watercolor and collage artist Michele Banks and Columbia University professor Vincent Racaniello, the host of This Week in Virology, a webcast about viruses.

Here's the description of all the bacteria contained within Sullivan's masterpiece:

The brown color is Proteus mirabilis, a bacterium known for its swarming motility that is acommon cause of urinary tract infections. The white color is Acinetobacter baumanii, an opportunistic bacterium that can cause infection in people with weakened immune systems. The blue-green color is Enterococcus faecalis, a bacterium that colonizes the GI tract and is a common cause of lower urinary tract infections as well as more invasive infections in immunocompromised hosts. The dark blue color is Klebsiella pneumonia, a bacterium found in the normal flora of the mouth, skin and intestines. It can cause different types of healthcare-associated infections including pneumonia, bloodstream infections, wound or surgical site infections and meningitis.

According to the description, Sullivan was able to achieve all kinds of different colors thanks to "chromogens in the agar," which "release a colored compound when hydrolyzed by specific enzymes allowing certain bacteria to appear different colors on it."

Despite her effort, however, Sullivan didn't take home first prize. That went to "Neurons," a sunset-colored creation by Mehmet Berkmen and artist Maria Penil:

Second place was awarded to "NYC Biome MAP," an inventive take on New York City's geographical boundaries. It came out of work between "citizen scientists and artists" at Genspace, a community biolab in New York City:

Of course, because it's 2015, there was also a minion-inspired petri dish:

More science and art, please. (But perhaps hold the minions next time.)