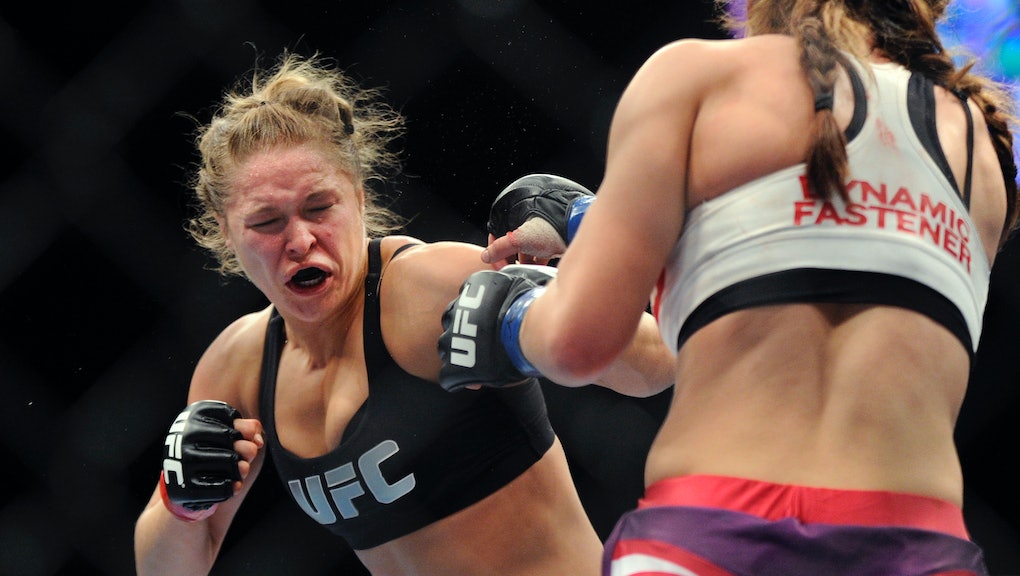 Ronda Rousey Reveals What It Means to Be a Champion

Ronda Rousey didn't just wake up as the Ultimate Fighting Championship's undefeated bantamweight champion, and she certainly doesn't need the fact she's a woman to precede her countless accomplishments as a fighter. In an interview with Self magazine published Monday night, Rousey revealed her definition of a true champion:

"I want my name to be mentioned along with Mike Tyson and Muhammad Ali," Rousey told comedian and Brooklyn Nine-Nine actress Chelsea Peretti, who conducted the interview for the magazine. "And I don't want the word 'woman' to be in front of 'champion.'"

The 28-year-old Rousey, whose mother, AnnMaria De Mars, is the first American winner of the gold medal at the World Judo Championships, said training for success is her ultimate motivation.

"It's motivating because it's something I have to keep earning," she told Self. "When I was a kid, all I did was train. I never went to a dance, I never had a date, I never went to a single party. Training was my whole life, and it was because I wanted to be able to win the Olympics more than I wanted to go to the movies with my friends."

Rousey has been fighting since she was 11 years old. She joined the U.S. Olympic team at 15 and eventually became the youngest American to rank No. 1 in the women's half-middleweight division at 16 years old, according to Biography.com.

Becoming a champion requires initiative, and the willingness to take on new challenges. As Rousey has previously said, she would never have become as successful if she were a "do-nothing bitch." Rousey, who currently holds a 12-0 winning streak, said she picked up that instinct from her mother.

"My mom never forced us to do anything. I fight, but my three sisters don't," she said. "What she really taught me was the value of giving up what you want now for what you want most. My sisters were taught that too, and they carried it through the professions they decided to pursue."