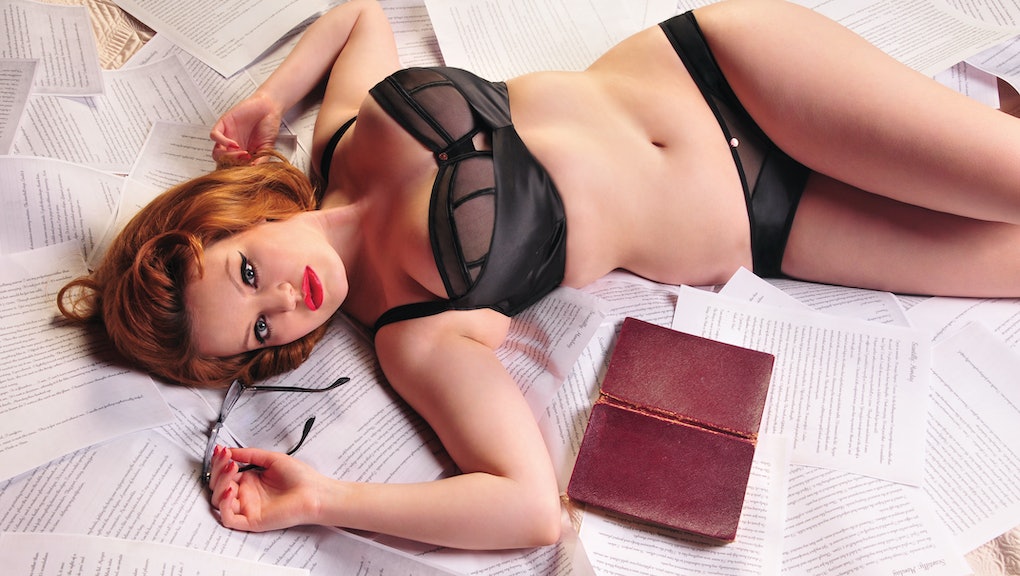 Buying a bra larger than a DD, as many women can tell you, is a living hell. For these women, bra departments suddenly shrink to just one dinky rack. Victoria's Secret is no longer an option. The mention of a strapless bra invites a burst of hysterical laughter. Certain bras can make you feel like you're going to suffocate, while others make you look like you're about about to nurse a newborn child.

Why are bras larger than a D or DD so goddamn hideous? And why do so few brands bother to even make them? To get answers, Mic asked three companies that specialize in DD+ lingerie — Hips & Curves, Curvy Kate and Harlow & Fox — why there are so few options, and what has to change so women with larger busts can finally get some justice.

What are companies are getting so wrong with DD+ bras?

Like anyone, people who wear a DD+ bra want three things: A bra that, No. 1, is not hideous, No. 2, comes in a variety of options and, No. 3, is high-quality. Most larger-sized bras score F's on all three categories — but especially the first.

"I could always find standard, everyday bras, but I wanted silk linings, delicate laces, something that felt out of the ordinary, and so that's what I created," Leanna Williams, the creative director of Harlow & Fox, told Mic.

"They wanted to wear something extra-special just as much as their smaller-busted friends did, but the options just weren't there," Williams said.

What plagues the market, these women say, are unappealing bras that just come in a boring tan or black.

"I go in and I'm faced with a very limited assortment," Hips & Curves' general merchandise manager Roisin Brodie told Mic. "I think it has extended to a black bra because now I can have a black and beige bra."

That's particularly frustrating for women who want lacier, sexier varieties. Across the pond, in England, DD+ bra and panty company Curvy Kate is using this gap in the market to its advantage, recently releasing a line of bras and lingerie in naughtier boudoir styles for women up to an HH, called Scantilly.

"Primarily, Scantilly was developed for pure indulgence, with the thought that the woman should complement the lingerie as much as the lingerie does the woman," Curvy Kate's marketing manager Hannah Isichei said in an email to Mic.

How is designing for a 34F bra different than designing, say, a size 32A?

Another big problem is quality. Hoisting up size-G breasts is going to take a well-made garment, but the current bras aren't all cutting it. "It's not necessarily well-made," Hips & Curves' Brodie said. "It's not going to last them a couple of wears."

Why? As expected, designing bras for a larger bust does take more skill than designing a 34A bralette.

"It requires years and years in technical skills," Brodie said. "You do have to say that this thin lace that might be okay to get away with on a 34DD, you have to maybe put a lining behind that because you don't want it to get too clumsy or too thick so you have to think of innovative ways to make it look like this minimizer way."

But in practice, there are things companies can be doing to create a higher-quality product — for example, not using small-fit models then simply estimating what the bigger size should look like.

"A lot of businesses start with that small size and just grade up," Brodie said. "We start with the larger-size models. We don't bring in a 34A model to design a 34DD model. Your proportions change, hugely. You need to see where to support the bust, where you have to put extra fabric. You don't want the shoulder straps to cut in. You don't want these thick, big, bulky shoulder straps."

Hips & Curves, which was founded in 2000, carries bras from a 36D up to a 48DDD. Since Hips & Curves designs around an individual woman's body, they've been able to design larger-sized bralettes, which are daintier bras commonly sold for smaller busts.

"They want to wear this bralette in this same way as everyone else, and because we first fit on real women, we can make any bra, in any style, for these women," Hips & Curves founder Rebecca Jennings told Mic.  "And since, the whole bralette side of our business has exploded."

Does it really cost more to make bigger bras?

"With regards to the cost, obviously the bigger size you go to, the more fabric per garment you are using," Charlotte Davies, Curvy Kate's head of design, told Mic. "When you are really only making 12 sizes, your fabric usage per size really doesn't change very much, and therefore the price is pretty consistent and accurate.

"When you talk about Curvy Kate for instance, we make 96 sizes and go from 28D to a 40K. When you compare these sizes, you could probable make two or three 28Ds from the fabric used to make a 40K," Davies said.

All right, that should be taken into account. Yet, there are still companies who are making it work.

"You average it out," Brodie said. "There are extra costs and some companies say, 'Well, the cutoff versus where our customer base is isn't worth it.' Whereas we come from the approach that the customers are asking us this, and it's our mission to give it to them."

"It is definitely more of a challenge [to design bigger bras], but I certainly don't think this means in any way it shouldn't be done," said Williams of Harlow & Fox.

But there's a huge market for these bras, right?

Why design bigger bras if they require more expertise and cost more? One word: demand. Consider the fact that the average bra size in the United States is now a 34DD, up from a mere 34B in just 20 years. Bigger boobs aren't limited to plus-size women either.

"There's a great demand and a very loyal market out there," Williams said. "I believe that every woman deserves to have the choice of something beautiful to wear, no matter what size she is."

The proof is in the sales numbers. Brodie reports Hips & Curves is growing its sales each year and has expanded internationally, with customers in Australia, France, Germany and the U.K.

That sentiment is echoed from Curvy Kate's Hannah Isichei, who told Mic, "There has been year-on-year growth since its launch. New retailers continue to launch Curvy Kate in their stores and results are instantly indicated through sales and positive customer feedback.

"Scantilly has been a huge hit too – there really isn't anything this sexy on the market for the fuller cup. And why not?" Isichei said.

So why don't more companies bother to make good bras for big boobs?

According Curvy Kate's Isichei, it may have something to do with the shoppers themselves: Many women are wearing the wrong bra size, meaning they may be unaware they're part of the DD+ set.

"Without bra fittings 90% of women are wearing the wrong size, and therefore will be wearing the middle size ranges 34B to 36D," Isichei told Mic. "Most women we meet think they are a 34DD, when in fact they are probably more like a 30F. If brands are ignoring bra fittings or fitting incorrectly in store, there won't be a need for the product as, unfortunately, many women just aren't educated on the right fit yet, so [they] won't be asking for these sizes."

Undoubtedly, there are companies that are simply skeptical about the tradeoffs in time and cost.

"To them, the additional development costs and planning isn't worth what they perceive the end sales result to be," Williams said. "But as women the world over become more and more aware of bra fit and learn about finding garments that fit their bodies better — not to mention as bra sizes increase — the demand for choice in this segment is only going to continue to grow."

What's it going to take to give DD+ women the bras they deserve?

"I think the customer is the revolution," said Hips & Curves' Brodie. "They can talk with their buying power. When you offer the customer the right thing, they'll come back to you and they'll realize the other brand just isn't good quality. And when they move away from that brand, that brand has to start paying attention."

A hopeful sign is the current push to "Drop The Plus," a campaign to start treating different body sizes the same — and that sentiment certainly applies to bra size.

"If I was not in the business, I'd like to walk into a department store and not have to walk into a separate section," Brodie said. "My size is in the same section as everyone else."

That will take mainstream companies like Target or H&M to truly address the potential shoppers at hand. All they're asking for is a decent bra that will last them a few months and make them feel however they'd like to feel — powerful, sexy, elegant.

As Williams put it, "Just because we happen to fit into a particular size segment doesn't mean we want to be relegated to basics all the time. We're as complex and multifaceted as any woman of any other size, and we want to feel just as decadent and luxuriant when we feel like it."