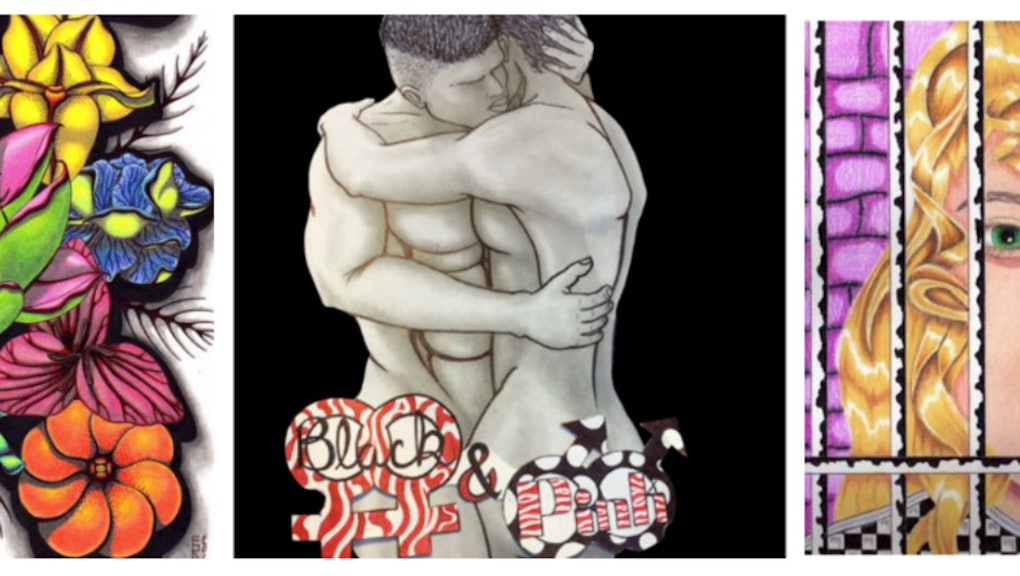 It may be fun to watch Orange Is the New Black, but what do we really know about the lives of people — especially LGBTQ people — in America's prisons?

Coming Out of Concrete Closets, a new report from national grassroots organization Black & Pink, aims to answer that question using the words and sentiments of LGBTQ people living in America's penal system. The report, which the authors called "the largest ever data set collected to date on the experiences of LGBTQ prisoners," compiles survey responses from almost 1,200 incarcerated LGBTQ people.

The report first highlights the many challenges that LGBTQ people face prior to entering prison: about a fifth of respondents said they were "homeless or transient," more than a third reported being unemployed, and just under a third received their high school diploma before their incarceration.

The report also noted the young ages at which many respondents first encountered the penal system: 37% of respondents' first incarceration occurred when they were under the age of 18.

Black & Pink national director Jason Lydon repeatedly called for LGBTQ rights to be viewed through a racial lens on a call with reporters Wednesday. "It is essential that we are prioritizing racial justice work and aligning with movements like Black Lives Matter," he said.

Lydon said these kinds of facilities "take away any form of autonomy from prisoners who end up there."

They were also engaging in consensual sexual relationships, although that did bring up health disparities behind bars. Only 2% of respondents reported prison-affirmed access to condoms, though 22% had used a condom or some other barrier to prevent sexually transmitted infections and 81% had discussed safer sex with their partners.

"They are finding ways to engage in sexual activity that is fulfilling, as safe as possible and meeting their needs even while serving time," Lydon told reporters.

However, one-third of respondents reported being disciplined for engaging in consensual sexual activity. Solitary confinement is often one of the punishments, according to the survey, which calls solitary confinement "a violent tool that can cause great harm," also cites the United Nations Committee Against Torture's stance on solitary confinement. That group maintains that prisoner isolation is "damaging to the person's psychic and moral integrity" and that it should be banned altogether.

LGBTQ respondents were more than six times as likely to be sexually assaulted than the general prison population, not including strip searches, which is often an opportunity for staff to touch prisoners inappropriately, according to anecdotal survey evidence. Prison staff also intentionally put some prisoners at risk for sexual violence, according to 76% of respondents who had been assaulted during incarceration.

A prisoner speaks out: Ashley Diamond, a transgender woman who is currently on parole after spending three years in a Georgia men's prison, joined the call to speak about her experiences in the prison system.

"As a prisoner who took the survey inside a prison, it was good to know that we were going to be heard," Diamond told reporters. "I took the survey and it was my way of being able to tell people about the horrors of what was actually happening to me. I encouraged all of the other LGBT inmates to do the same."

Diamond said she wants those who read the report to "put [themselves] in the position of someone who is vulnerable." "When [I] say vulnerable [I] don't mean vulnerable because of some deficiency," she said. "Sometimes just begin gay or bisexual or transgender is a horrible thing when people don't educate themselves on the issues."

Diamond shared with those on the call, "I am one of the 59% of those transgender inmates who reported sexual abuse."

According to Diamond and the report, prisons are in the habit of using solitary confinement as a way of silencing those who experience sexual abuse.

"If you don't get uncomfortable with these findings, then there's something wrong with us," she said.

Black & Pink's discomfort with the present system is evident in a list of demands, including ending mandatory minimum sentencing for all offenses, getting rid of life without parole sentences, ending the death penalty and eliminating solitary confinement.