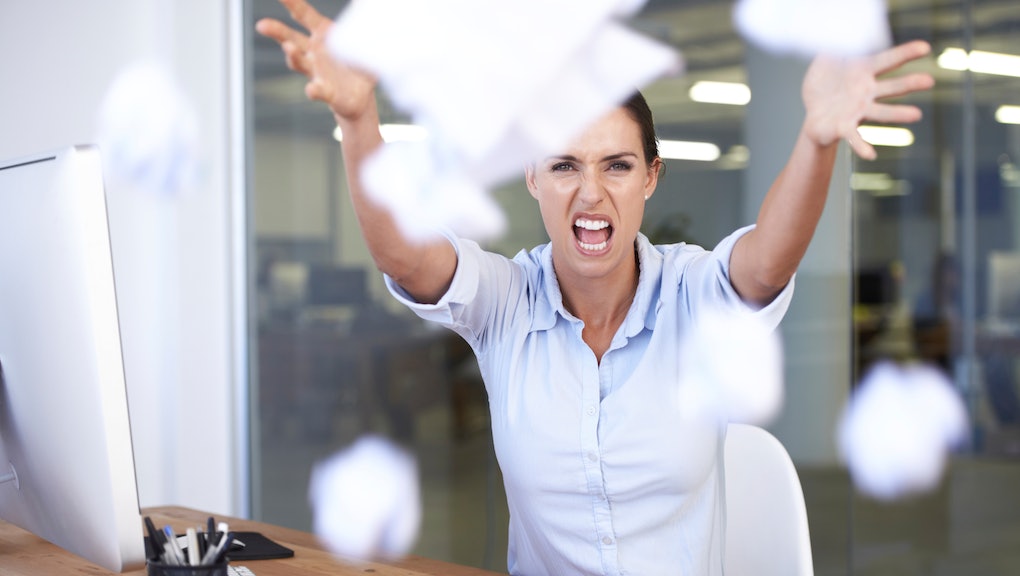 This Is What Bad Grammar Does to You're Brain

How did you feel when you read the your/you're mix-up in this headline? Did you brush right past it? Did you notice, smirk and keep moving? Or did you reach for your laptop and try to rip it in half because how on earth could someone be so stupid that they would screw up such easy, basic English? What the hell what the hell what the hell?

Feel the hate flow through you — your brain just got hacked by one letter and an apostrophe. This is the science behind why we get so pissed off about bad grammar.

At this moment, your body is releasing adrenaline and cortisol. The latter is a hormone that helps you fight stress. At the same time, it's pumping blood into your extremities and muscles. It's doing this because it believes your body is in a battle — and now it's time to fight.

If you're the type whose ears blow steam when people mix up their/they're/there, forget "it's" is not possessive and say things like "I'm literally taking him under my wing," your body's reaction is analogous to getting cut off while driving. Your brain sends you into fight-or-flight mode, a hypervigilant state where your face might flush, your palms might get sweaty and you can feel tension coursing through your body.

But the minute the car is gone — and the bumper sticker that says "One Big Ass Misteak America" disappears — your body doesn't return to normal. There is no switch that goes off when the crisis is averted to tell you to calm down. Your body stays in fight-or-flight mode.

The scary part? This state, when chronic, can have a huge impact on your body and mind.

"In fact, it shrinks certain brain structures," Dr. William Barr, associate professor in the Departments of Neurology and Psychiatry at NYU Langone Medical Center, told Mic. "In studies of the effect of stress on the brain, the volume of your hippocampus, the area important for memory processing, can be reduced by these cortisol effects."

For grammarians, what really grinds their gears is repeated instances of the same mistake. Especially a mistake they've corrected before.

For grammarians, what really grinds their gears is repeated instances of the same mistake.

"I get really annoyed when someone writes up an email for me to review and it's poorly written or edited," Dr. Sanam Hafeez, a neuropsychologist and school psychologist based in New York, told Mic. "It implies this person doesn't respect me enough because I've pointed out the problem before. Or they don't care about my authority. That might make you actually angry, not just aggravated."

Thing is, people don't mix up there, their and they're to piss off professors. More likely, they're not paying close attention to what they're writing. But the brains of those editors and professors who keep correcting the same mistakes are saying otherwise. At that point, the feelings of anger are occupying more than a fleeting moment in their day.

"We all have these moments where we wish we didn't respond to something so cordially because we felt disrespected," Hafeez said. "You might stay up at night thinking about that event over and other again. These anxious personalities are the ones that end up with heart disease and high blood pressure."

For a long time, doctors have known emotion is just combination of sense and cognition. Regardless of what the emotion is, positive or negative, we experience a rush in our bodies, a change in heart rate and physiological arousal. Our brain is trying to figure out if it's happy or angry, and when it does, our heart rate and blood pressure return to normal.

Chronic stress is different. For people with chronic stress, their bodies are like a pump primed to react faster when triggered. Even usually nonstressful things drive them mad. It's called habituation, and it's the same force that makes you angry at every pedestrian you see after some jerk on his phone jaywalks in front your car. "Most of the time, it takes a big stimulus for the brain to respond," Barr said. "But as the brain gets used to seeing this, it responds to much smaller amounts."

Like every other little thing that irks us in the day to day — getting cut off in traffic, getting interrupted in conversation, drinking milk out of the carton — letting misspelled words get to us can result in very real anxiety and anger issues.

"The more you stay in these situations and face these triggers, the more you need ways to reduce that stress," Hafeez said. "If anger is your reaction to everything, you probably have a bigger problem."

Some doctors would prescribe medication, like Xanax or Inderal, to reduce your heart rate. But if you've found yourself getting irrationally angry, first try to cool your jets naturally instead of reaching for pills.

Take 10 deep breaths. Tell yourself to calm down, that not everyone reacts to things the same way you do. Relax. Take a walk. You're fiery hatred for bad grammar could totally wreck you.