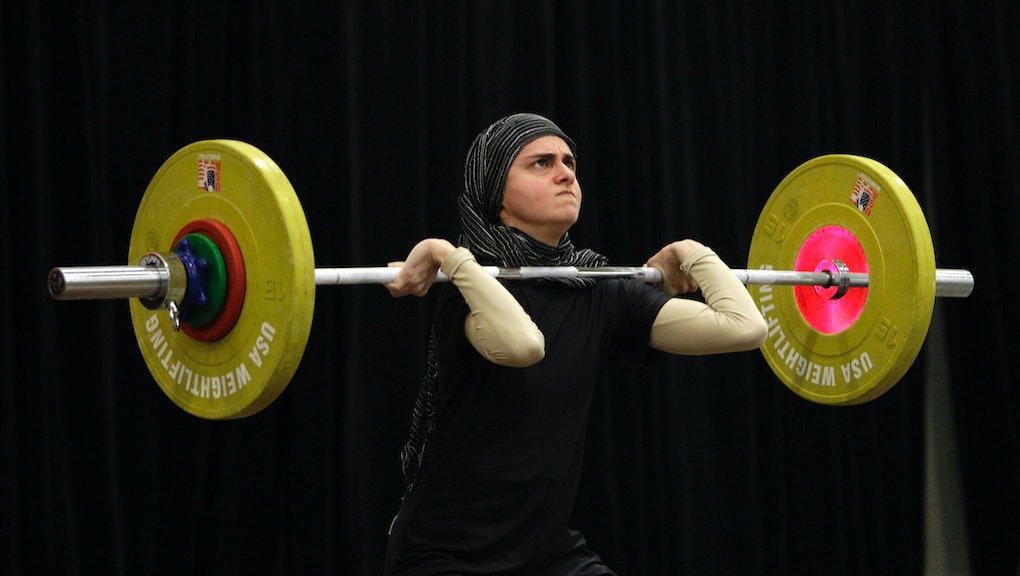 Meet the Athletes Shattering Stereotypes About Muslim Women in Sports

The 2012 Summer Games marked the first Olympics where women participated in all 26 sports. It was a huge victory for gender equality — at the world's largest athletic event, no less — but one narrative stood out in particular for viewers.

Sarah Attar, a native of Escondido, California, competed in the 800-meter heat in London, prompting a standing ovation from the crowd and making headlines around the world. At the same time, Wojdan Ali Seraj Abdulrahim Shahrkani successfully challenged the International Judo Federation's headwear ban and competed in London as a judoka. Both wore their hijabs during competition. Together, they became the first women to represent Saudi Arabia in Olympic history.

Muslim countries Brunei and Qatar also sent women to the Olympics for the first time in 2012, according to Reuters, and their example proved to be an inspiration. As more rose to prominence on the international stage, the challenges facing Muslim women athletes have garnered increased attention over the past few years, whether those challenges stemmed from administrative regulations regarding headwear or more individualized struggles, as outlined below.

Meanwhile, apparel companies are investing in breathable head coverings and gear designed to meld religious garb with athletic functionality. Attire regulations within organizations like the International Basketball Federation are growing steadily less restrictive. And despite the challenges they face, Muslim women continue pushing to ensure they are an integral part of these athletic institutions and events.

Below are five such athletes from around the globe, who showcase Muslim women's remarkable contributions to the world of sports. Mic reached out to them through the organization Shirzanan Global Edition, which advocates for Muslim women athletes, and spoke to all five via email.

Here's what they said:

Abdul-Qaadir has been playing basketball since she was 4 years old. "I am the youngest of eight, and almost all of my siblings played," she told Mic. "It was innate for me to play, as I grew up going to games."

A starter for her Springfield, Massachusetts, high school team since the eighth grade, Abdul-Qaadir holds the Massachusetts state high school scoring record for players of either gender — 3,070 points over her five-year career — and became one of the only players to ever compete in the NCAA women's basketball tournament wearing a hijab during her tenure at the University of Memphis.

Though her decision to wear religious attire in competition has placed her at odds with FIBA — international basketball's governing body — Abdul-Qaadir says that her community has been nothing but supportive. "I was never discouraged by anyone," she said. "I was a natural, so everyone who saw me play insisted and encouraged me to continue playing basketball.

"Living life as [an] athlete allowed me to be able to conform to any environment," she added. "Sports are so universal; wherever I went I fit right in regardless of my race, ethnicity or religion."

"I never thought I would be an athlete, or that my attempts to be one would ... help the next generation of women athletes," Abdullah told Mic. But the Pakistani-American weightlifter's fight to to compete wearing her hijab opened the door for many of her contemporaries — though it wasn't always a smooth ride.

Abdullah, who spent much of her youth in Florida, said she grew up with no sporting role models. When she picked up taekwondo during graduate school — at a friend's encouragement — it sparked her interested in weightlifting, which she used as a training method.

Abdullah had no time for shortcuts. "I refused to use 'pink' dumbbells (aka female weight-restricted dumbbells)," she said. "With my bony wrists, I wanted to pick up the real stuff, the steel barbell, and make the most of it. I refused to wear gloves; instead I would apply chalk to my hands as I gripped the barbell with no barrier, got into my starting position, breathed in as much oxygen as I could, tightened my muscles and used my legs to drive and propel the bar up to my shoulders and over my head."

She declined to participate in the U.S. national weightlifting championship in 2010 because they would not let her compete in hijab. But after a legal battle, Abdullah got the ruling overturned and went on to become both the first woman weightlifter to represent Pakistan and the first to compete internationally in hijab at the world championships in 2011.

Khan describes herself as a "competitive and angry child." She told Mic parents got her into swimming as an outlet for her energy, with her father as her coach — even despite some initial skepticism from other members of her family.

"These things happen: First some relatives discourage you, then when they see you excelling they encourage you," she told Mic. "My dad would answer them and and I was hardly bothered."

"The biggest challenge I faced was my training, as Pakistan is a male-dominated society where women do not get proper facilities and female trainers are nowhere to be found," she added. "Women sometimes leave their sports as their parents are not comfortable leaving girls alone on male ground."

A multi-event fixture at the South Asian Games since 2004, Khan went on to represent Pakistan at the 2008 Summer Olympic Games in Beijing. "My sports made me a more focused, sharper, more determined and stronger person than I was before," she said. "It's a mental game — the stronger you are the better you are."

"But I must admit," she added, "the biggest obstacle by far would be breaking societal barriers, because even though you might have the will to get your parents on your side, there is still the pressure of the rest of the community, and it was very important for me to have my parents on my side as doing this without their blessing was not an option. So in many ways it was more challenging than the actual mountain itself!"

The support of her family was invaluable throughout her exploits, she told Mic, but she hopes for a future where such encouragement is a broader societal norm for women, not an aberration. "Although I never set out to be an athlete from the beginning, I take it as a huge responsibility," she said. "I feel like it's my duty to clearly relay the message of being brave enough to follow your dreams, and if I inspire just one person, it would mean the world to me."

"It's a personal dream to live long enough to see a generation where there are no longer any firsts — because all of the firsts with regards to Arab women have been conquered."

"I grew up doing a variety of sports," Seraji, a professional snowboarder from Tehran, Iran, told Mic. "My parents put me on skis at a very young age, and when I switched to snowboarding in 2000, I felt in love with it and couldn't stop riding. I had no other choice but to quit my job as a graphic designer and become a full-time snowboarder."

It was not an easy transition, she said: "Being a snowboarder at that time wasn't the most acceptable thing to do. You weren't even allowed to ride on the actual slope, so we had to practice in the parking lot at the beginning. Skiers thought boarders were ruining the snow. We didn't have big support. There were no proper snowboard instructors, and the federation wasn't willing to promote it [in Iran]."

Family resistance was also an issue at first. "Even though my parents always supported me in every single thing I do the two first years of me wanting to go to the mountains everyday [didn't make them] happy," she said, "They thought I should be studying in higher levels, and it's very hazardous to snowboard everyday. So they stopped supporting me financially. I had no other choice but to start teaching snowboarding to make enough money for being able to keep doing what I love. After two seasons, when they noticed my determination and accomplishments, they started to believe in me once again and support me to the fullest."

Seraji is now one of the highest-profile snowboarding and surfing instructors in Iran. "I never got the chance to get properly coached when I was young and passionate, as snowboarding, especially for women, was not developed in Iran," she said. "That makes me want to coach young talented woman and try to send her to international competitions."

"Whatever I am today is because I never gave up and nothing could stop me from living my dream," she added. "I would say staying determine is the key to achieve what you really want in life."