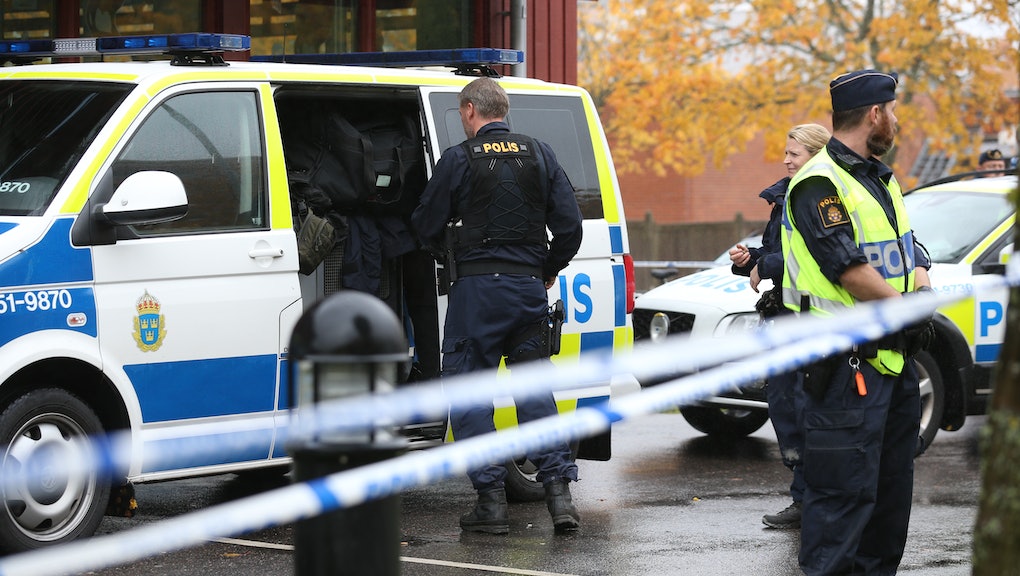 Violence erupted Thursday in the Swedish city of Trollhattan after a masked man stormed a local school with a sword, killing two and injuring two others before being shot by police and taken into custody.

The dead have been described as a teacher and a pupil, according to the BBC.

The attack occurred at about 10 a.m. local time in the cafe area of the Kronan school, which had about 400 students. A number of students were seen fleeing the campus, the BBC reported.

"One of my classmates' sisters called her to warn her that there was a murderer at the school. So we locked the door to the classroom, but our teacher was still outside in the corridor," a teenager at the school told the Local. "We wanted to warn him, so a few of us went outside and then I saw the murderer, he was wearing a mask and had a sword. Our teacher got stabbed. The murderer started chasing me, I ran into another classroom. If I had not run, I would have been murdered."

The attack on Swedish soil comes in the aftermath of a number of recent high-profile school shootings in the United States, most notably the massacre in Oregon's Umpqua Community College that left 10 dead earlier this month. Nationally, there have been 152 school shootings since 2013, according to a count kept by Every Town for Gun Safety.

While advocates routinely call for stricter gun control measures, firearms supporters led by the National Rifle Association have consistently said that attacks like that of Umpqua or Sandy Hook or Columbine are the result of mental health problems, and gun regulation would not deter an unstable person from committing an attack.

In Sweden, where guns are highly regulated, school shootings are almost unheard of. In 2001, there was a school shooting in a suburb near Stockholm, leading to the death of a 16-year-old, which the Associated Press reported at the time, "appeared to be Sweden's first shooting death to occur while school was in session." Before that there was another case in Kungälv that also resulted in one death — in 1961.

The absence of gun violence in Sweden has not been filled by any epidemic of sword violence either.

It is, however, noteworthy that the attacker's actions only resulted in one death before he was subdued by police.

It doesn't take a great imaginative leap to wonder about what could have happened if he carried an M16. In fact, Swedes need only look to their Scandinavian neighbor, Norway, which saw a gunman storm a summer camp in 2011 that led to the deaths of 77 people to see the difference between guns and swords.