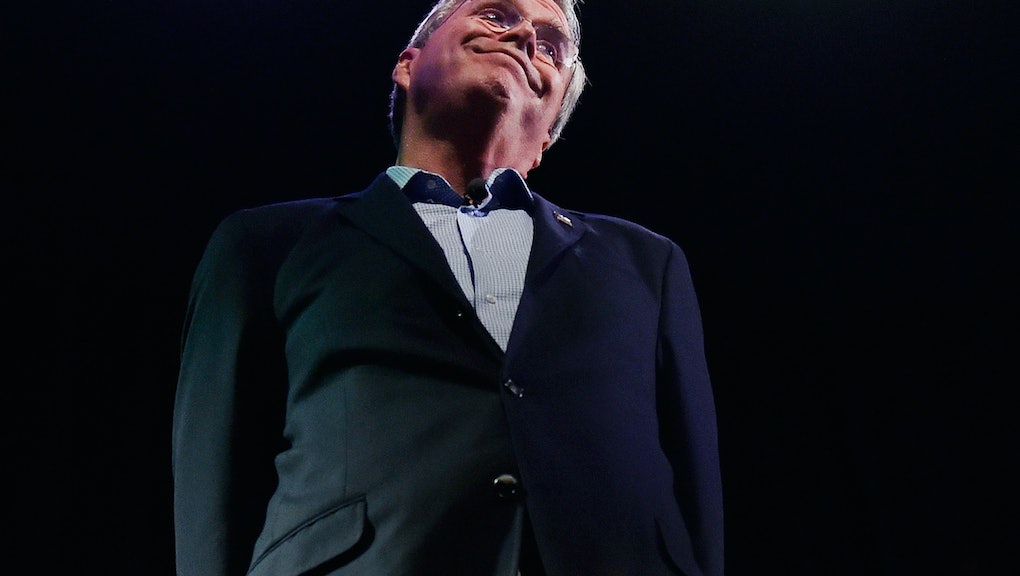 Jeb Bush, a man currently making an effort to become president of the United States, was asked at a Wednesday event at the College of Southern Nevada who his favorite Marvel superhero is. His answer managed the rare triple play of being offensive, out of touch and plainly incorrect.

At first, as reported by CNN, Bush couldn't name any hero at all, instead saying, "I wish I owned Marvel, as someone that believes in capitalism." When he finally could name a hero, he said as an "old-school" guy, he preferred Batman. Notably, Batman is not a Marvel superhero, but a DC Comics one.

Bush, a man who formerly ran a whole state, did manage to come up with another answer. He had seen an ad for CBS' new show Supergirl. Supergirl is, like Batman, a DC Comics hero. "I saw it when I was working out this morning," Bush said. "She looked pretty hot. I don't know which channel it's on, but I'm looking forward to that."

After, Bush added, "That'll make news." So, to be fair, he did get one thing correct.

The superhero film genre is one that suffers from sexism in many forms. Internally, the problem is one of representation. Not one of Marvel's modern films has starred a woman in a title role, nor will they until 2018, in Ant-Man and the Wasp. Marvel and DC have also failed to hire a woman to direct any of their modern films.

Externally, female superheroes suffer from being sexualized. In June, Suicide Squad star Cara Delevingne spoke to the absurd, revealing outfits women are often forced to wear in comic book movies. "Female superheroes are normally naked or in bikinis. No one would be able to fight like that," Delevingne told Empire. "Wonder Woman, how the hell does she fight? She would be dead in a minute."

So while Bush's answer may be a silly punchline, it does enforce a system in which female superheroes are appreciated more for their bodies than their powers. He knew it would make news, but Bush may not have realized just how much his answer would reveal about himself.