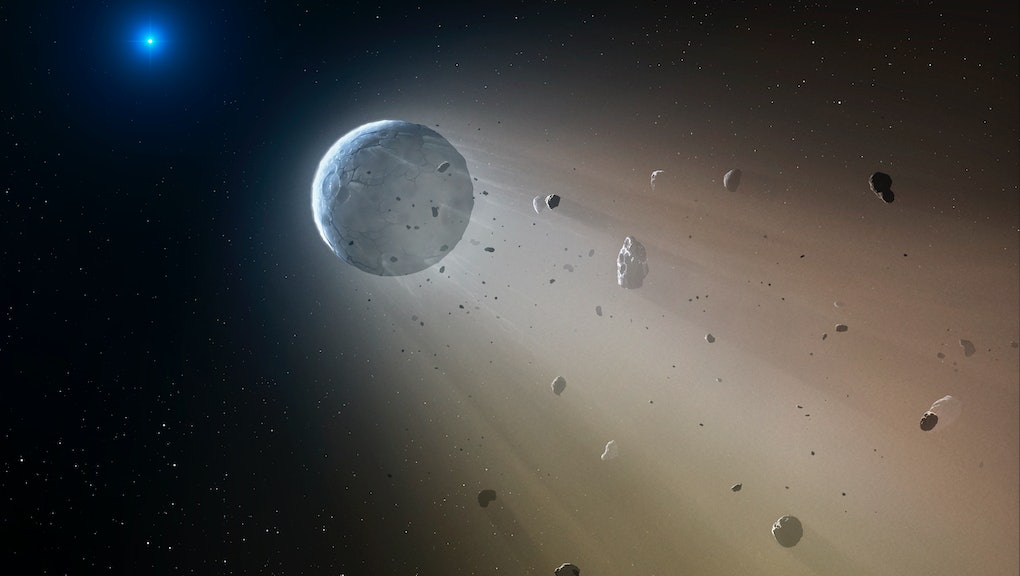 According to NASA, it confirms one of the more gruesome theories of the universe: that white dwarfs — small, dense stars that form when a star burns out or collapses — can "cannibalize" other planets still hanging around them.

"We are for the first time witnessing a miniature 'planet' ripped apart by intense gravity, being vaporized by starlight and raining rocky material onto its star," said Andrew Vanderburg, graduate student at the Harvard-Smithsonian Center for Astrophysics and lead author of the paper published in Nature, according to the NASA press release.

"We are for the first time witnessing a miniature 'planet' ripped apart by intense gravity, being vaporized by starlight and raining rocky material onto its star."

In this case, the star is WD 1145+017, now roughly Earth-sized, and the "planet" it's ripping up is about the size of an asteroid. Last year, researchers using the repurposed Kepler space telescope (now called the K2 mission) started noticing tiny changes in brightness of a star in the constellation Virgo, indicating something was moving between the telescope and the star at which it was pointed.

But instead of seeing a tight, U-shaped pattern of a formed planet, astronomers saw an odd drop in brightness that looked like a comet tail and a ring of circling debris, meaning the planet was getting shredded up in front of them thanks to the dwarf's powerful gravity.

"We're watching a solar system get destroyed," said Vanderburg, according to Scientific Computing. "This is something no human has seen before."

"For the last decade, we've suspected that white dwarf stars were feeding on the remains of rocky objects, and this result may be the smoking gun we're looking for," said Fergal Mullally, staff scientist of K2 at SETI and NASA's Ames Research Center in Moffett Field, California, in a NASA release. "However, there's still a lot more work to be done figuring out the history of this system."

Knowing all of this probably isn't going to affect your daily life. But it shows the power at astronomers' disposal. Using Kepler, the same telescope that discovered a bigger, older cousin of Earth, astronomers are likely to continue confirming long-standing theories they've had about the universe, bringing humankind another step closer to figuring out what's happening in the expanse of space.