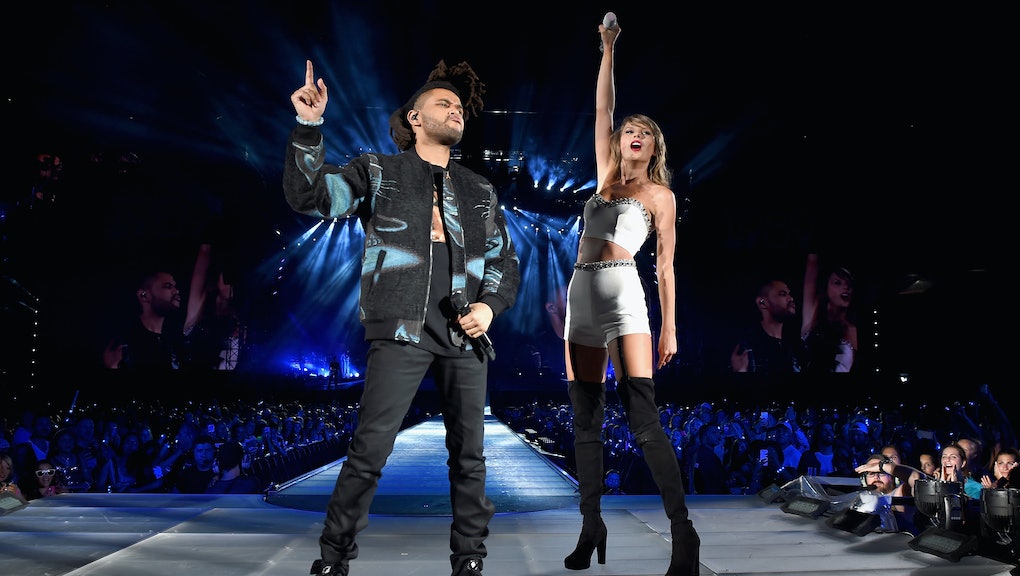 Taylor Swift Pet the Weeknd's Hair When They First Met

"The whole time [Swift] was talking, she was kind of, like, petting my hair?" Tesfaye told Rolling Stone. "I think she was just drawn to it — she must have been a little gone off a few drinks."

Tesfaye told Rolling Stone he wasn't going to tell Swift, "'Hey, can you stop?'" because it "felt good." "But when she started petting my hair, that's when I was like, 'I definitely need a drink.'"

A lot of thought has gone into Tesfaye's distinctive 'do, a look he told Rolling Stone is inspired by American artist and musician Jean-Michel Basquiat. Tesfaye's hair has even garnered a curated Tumblr page where fans post images of him.

"I want to be remembered as iconic and different," Tesfaye told Rolling Stone. "So I was like, 'Fuck it — I'm gonna let my hair just be what it wants.' I'll probably cut it if it starts interfering with my sight. I can kind of see it right now. But if I cut it, I'd look like everyone else. And that's just so boring to me."

Whether the hair-petting incident was warranted, Tesfaye said Swift was a gracious fan of his work. "She actually schooled me on my own shit," Tesfaye told Rolling Stone. "She was like, 'I've been listening to 'The Morning' [from House of Balloons] for years — it's one of my favorite songs ever!' I mean, she might have just Googled it. But she seemed genuine."

In July, Tesfaye and Swift shared the stage in New Jersey during Swift's 1989 tour. The duo delivered a live rendition of the hit single "I Can't Feel My Face" off the Weeknds' most recent album, Beauty Behind the Madness, which was released August.