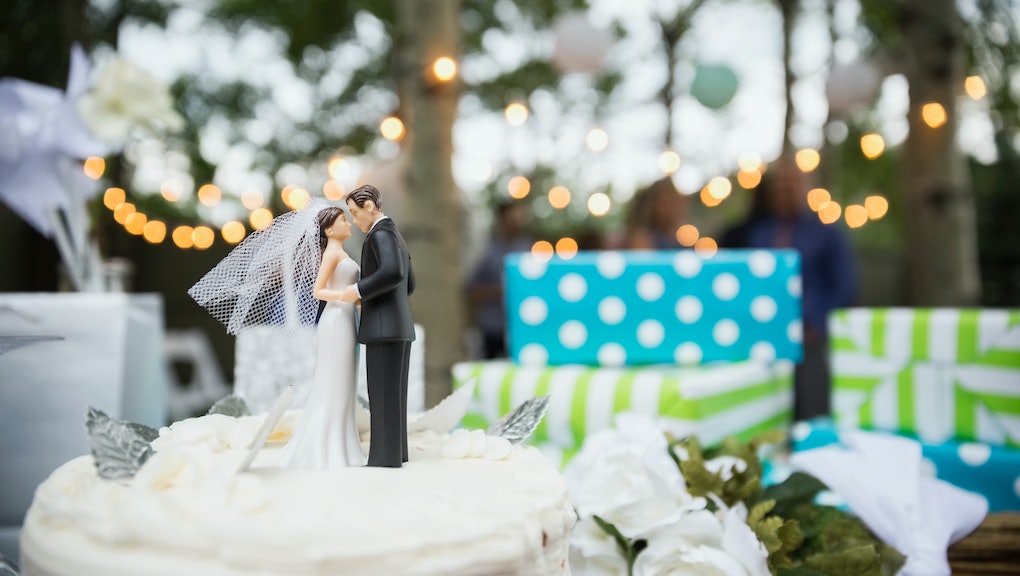 In an era where an estimated 95% of Americans admit to having had premarital sex, one would think that the concept of being "pure" before marriage would be somewhat outdated. Yet for the millions of Americans who have pledged to abstain from sex before marriage, the opposite is the case. Newlywed Brelyn Bowman (née Freeman) was one of those teens.

According to her wedding website, Bowman made a virginity pledge when she was 13. The Maryland business owner signed a contract with her parents committing to "abstain from fornication (rubbing and petting)" until marriage. So when she married gospel singer Tim Bowman Jr. on Oct. 10, she decided to prove that she'd kept her promise by presenting her father, the Rev. Mike Freeman, with a framed "certificate of purity" signed by her doctor.

According to Bowman's Instagram, her physician, who is listed as Dr. Diana Soffer, was able to "confirm" her virginity by checking to see if her hymen, a tissue membrane that surrounds the vaginal opening, was intact. In a photo that has since gone viral, Bowman and her father proudly posed with the certificate to prove that her hymen hadn't been disrupted before she was married, which her doctor apparently used as evidence that she had not had sex.

The virginity myth: Bowman's decision to gift her father with "proof" of her purity in front of her wedding guests (and subsequently, the entire Internet) has been widely criticized for promoting harmful beliefs about female sexuality. The certificate itself is, indeed, a prime example of problematic social mores that police women's bodies and sexual choices, teaching them that their value as human beings is dependent solely on whether or not they've had vaginal intercourse.

But while Bowman's story might sound shocking in this day and age, she's far from the only American woman to fixate on her own virginity — or to announce it publicly. There's a wealth of resources on the Internet for women looking to purchase purity certificates before their weddings. Public ceremonies where couples exchange purity rings, as well as purity balls where young women "gift" their virginity to their fathers for safekeeping, are also common.

Bowman also isn't the only patient to go to the doctor for a virginity test. Dr. Leah Torres, an OB-GYN and member of Physicians for Reproductive Health, said that in Utah, where she practices, "premarital exams" are common, especially among the state's sizable Mormon population. The basic pelvic exams are meant to include hymenal evaluation for the purposes of inferring whether patients have remained "pure" before marriage.

"In a nutshell, a premarital exam was confirming virginity — a pelvic exam to look at the hymen and say, 'Yep, you are OK to get married because you are still a virgin, and therefore worth being married to this good Mormon boy,'" Torres told Mic.

Torres said she doesn't believe many physicians outside her state perform virginity tests, though Bowman's doctor clearly makes for one example. (Mic reached out to a listing for the Maryland physician who reportedly signed Bowman's purity certificate, Dr. Diana Soffer, but did not receive a response to our request for comment.)

But while the fact that the certificate was signed by a doctor might have made it seem valid, that doesn't mean it was medically accurate.

An outdated (and inaccurate) test: Hymenal testing has been used around the world to try and evaluate women's sexual histories. It's been required for everything from allowing women in Brazil to become schoolteachers or to join the Indonesian military. The practice of physically "testing" for virginity by examining a woman's hymen, however, has been repeatedly debunked as junk science.

According to Torres, any number of different activities — riding a bike, playing sports or using tampons — could disrupt a woman's hymen, making the membrane a rather unreliable indicator of virginity. "The hymen, also known as the hymenal ring, can be examined, though to say if it has been 'broken' or not is no more reliable than taking an educated guess from the patient's story," Torres told Mic.

Torres said that doctors' evaluations of hymenal tissue tend to be subjective and that two physicians could have a different opinion of whether or not the same woman's hymen was intact. (It's also not unheard of for women who are forcibly subjected to hymen testing to purchase fake hymens on the Internet.) Either way, disruption isn't an indicator of "lost" virginity.

"The bottom line is, while there is such a thing as a hymenal ring, it has no correlation to sexual activity," Torres said. "[A woman] might have a disruption from activities that do not involve a penis. On the other hand, she can have vaginal sex and her hymenal ring may remain intact. The vagina is very pliable. It adapts to different things."

Additionally, the very idea of what even constitutes an undisrupted hymen is debatable. Dr. Vanessa Cullins, the vice president of external medical affairs for the Planned Parenthood Federation of America, told Mic that for a woman's hymen to accurately indicate whether or not she had ever had sex, the hymen itself would have to be imperforate or completely covering the vaginal opening. According to Cullins, that rarely occurs.

"There is no virginity test," Cullins said. "Unless a person has an imperforate hymen, you can't tell if they've had sex or not. That would mean your vagina was completely closed, which is abnormal. It would cause that particular person to have extreme pain upon having something enter her vagina. In terms of hymenal testing, the whole thing is a ruse."

Why would a doctor perform the test in the first place? Although Torres and Cullins were both dubious that any reputable physician would endorse hymenal testing as a reliable method of determining virginity, its continuing use, typically for religious reasons, speaks to the larger phenomenon of policing women's bodies. The fact that hymenal tests have little to no medical value — along with the fact that an equivalent test for male virginity doesn't exist — betrays the true goal of looking for physical signs of purity: it's a way to wrest control of female sexual autonomy.

That's why Torres says most doctors take a different approach when they are asked to test patients for virginity.

"What I do, and what I think most reasonable physicians do, is use the premarital exam for the sex talk," Torres said. "I use it because my patients — and I actually believe them — have not had any sort of sexual activity. They're jumping off their cliff on the wedding night, and so I use the time to talk about consent, active communication, birth control and exploring each other's bodies, instead of diving right into penis-in-vagina sex."

Women walk away from those conversations about consent and desire, Torres said, with much more information than the knowledge they already had about their own virginity. "My patients will look at me like, 'I wish someone had ever told me that before,'" she said. "I'm the first person talking to them about this."

In the viral storm of criticism that's followed Bowman's Instagram post, that's something to keep in mind: While it's easy to criticize her decision to present her father with a purity certificate, she should not be demonized for the choice to do so. Freeman told BuzzFeed he was "totally unaware" that his daughter planned to make any sort of presentation until the reception, when she remarked that "she wanted to honor [her father] by not allowing any man to touch her before her husband."

As was the case with Bristol Palin's pregnancy announcement earlier this year, to judge Bowman for her decision would be to overlook the cultural values that shaped her understanding of sex and sexuality, troubling as those views might be. That the bride bought into society's innumerable myths about purity isn't the issue. That a practicing physician helped reinforce those falsehoods is.