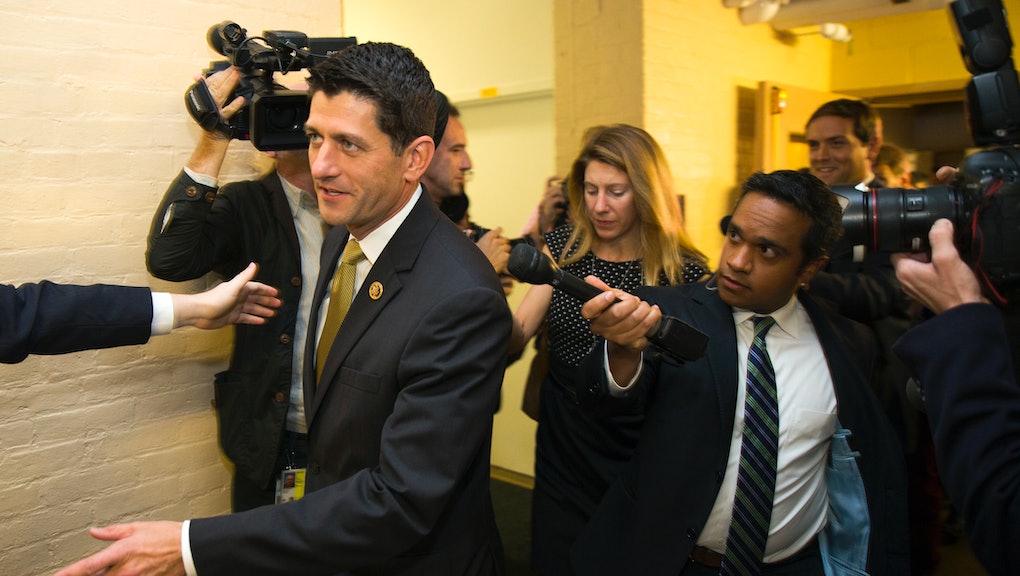 Paul Ryan Is Officially Running for Speaker of the House

Rep. Paul Ryan (R-Wisc.) announced on Thursday evening that he would run for speaker of the House, potentially putting an end to a protracted internal battle among House Republicans.

In a letter to colleagues, Ryan said, "I never thought I'd be speaker. But I pledged to you that if I could be a unifying figure, then I would serve — I would go all in.

"After talking with so many of you, and hearing your words of encouragement, I believe we are ready to move forward as one, united team," Ryan continued in the email. "And I am ready and eager to be our speaker."

Ryan had very publicly resisted throwing his name into contention for the job, citing concerns about the demands such a role would place on his time while he raises young children. Ryan is also widely believed to be eying a presidential run in the future — an effort which could be harmed by overseeing a sprawling and divided Republican caucus in the House. He is currently the chairman of the House Ways and Means Committee and was the GOP's vice presidential nominee in 2012.

On Tuesday, Ryan met with his Republican colleagues and laid out several conditions that the caucus must agree to before he would run for speaker. He said then that he would only serve if he had the support of all Republican factions in the House, including the conservative House Freedom Caucus, a group of 40 conservative members who had successfully stymied Majority Leader Kevin McCarthy's (Calif.) bid for speaker two weeks ago.

In response to Ryan's preconditions, the Freedom Caucus met on Wednesday night to gauge support among its members for a Ryan speakership. Some conservatives have said that Ryan is too far to the left to serve as speaker, citing his position on immigration in particular. Nevertheless, a "supermajority" of the caucus said they would support Ryan should he run for speaker, which paved the way for his entering the race.

On Thursday, Ryan said he had "spoken with many of you over the past few days, and I can sense the hunger in our conference to get to work."

Current Speaker John Boehner of Ohio has scheduled the speaker election for Oct. 29, meaning Ryan could be officially tapped as his replacement as early as next week.