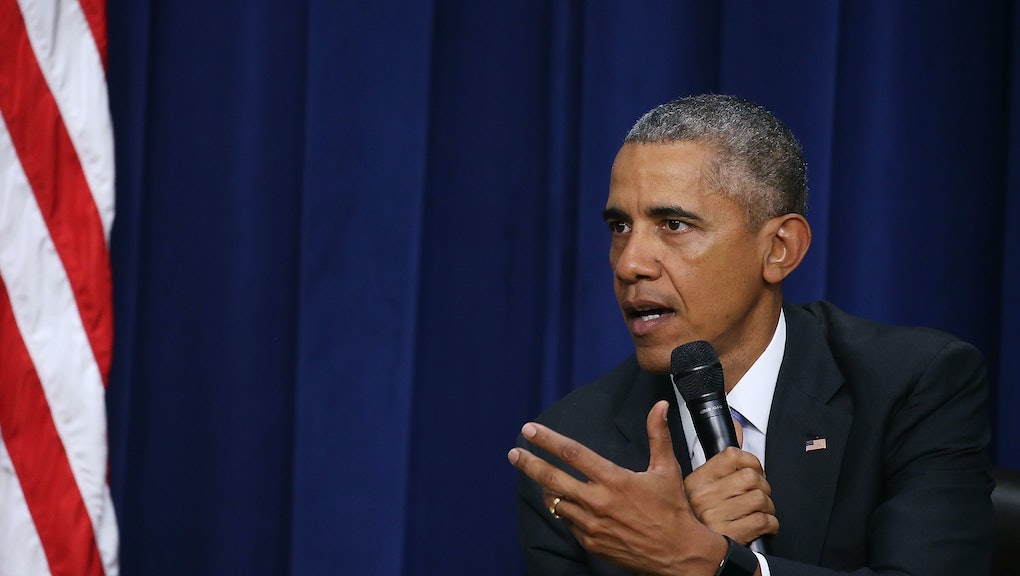 President Barack Obama was once reluctant to express solidarity with Black Lives Matter. That is no longer the case.

At a White House panel discussion on criminal justice reform hosted by Yahoo News and the Marshall Project on Thursday, the president offered what may be his most forceful defense of the slogan and social movement to date. Recently he has advocated for policies that address a number of the group's core grievances, but he's generally shied away from explicitly backing the movement.

The president said that Black Lives Matter is homing in on "a legitimate issue that we've got to address," and that invoking the term doesn't mean, as some of the movement's opponents have argued, that black lives are more sacred than others:

The president dismissed the idea that the threat to black communities was exaggerated.

"We as a society — particularly given our history — have to take this seriously, and one of the ways of avoiding the politics of this and losing the moment is everybody just stepping back for a second and understanding that the African-American community is not just making this up," Obama said. "It's not just something being politicized. It's real, and there's a history behind it."

As he has in the past, Obama offered support for the dilemmas police officers face on the job, and said he believes law enforcement was suffering more from bad apples than systemic misdeeds.

"I think it's important ... to understand the overwhelming majority of law enforcement is doing the right thing and wants to do the right thing," Obama said. "And so we shouldn't be too sanctimonious about situations that sometimes can be ambiguous."

A broad discussion: While Obama's remarks on Black Lives Matter may be the most eye-catching moment of his White House discussion, his most radical remarks in fact came in the form of a wonky question.

"Can we, in fact, significantly reduce the prison population if we're only focusing on nonviolent offenses?" Obama asked the panel.

The answer to that question, as plenty of evidence from experts makes clear, is no.

And Obama insinuated that he knew the answer. "Part of the reason that in some countries — in Europe, for example — they have a lower incarceration rate because they also don't sentence violent offenders for such long periods of time," he said.

As the president embarks on a multi-state speaking tour to promote criminal justice reform, he'd be wise to make this point over and over again. While the Senate is considering a bill that constitutes the most serious reform to the criminal justice system in two decades, its drug-offense-centered proposals would likely only put a small dent in the prison population. The group of more than 130 prominent law enforcement officials who banded together Wednesday in order to call for reforms to the sentencing practices have made some provocative remarks, but also generally failed to reckon with punishment beyond drug-related or nonviolent offenses.

At this point, it's extremely likely that the criminal justice system will undergo some changes in the coming year. The question is how big they'll be.

Watch a clip of Obama's comments on Black Lives Matter here, and find the full conversation at the Marshall Project: