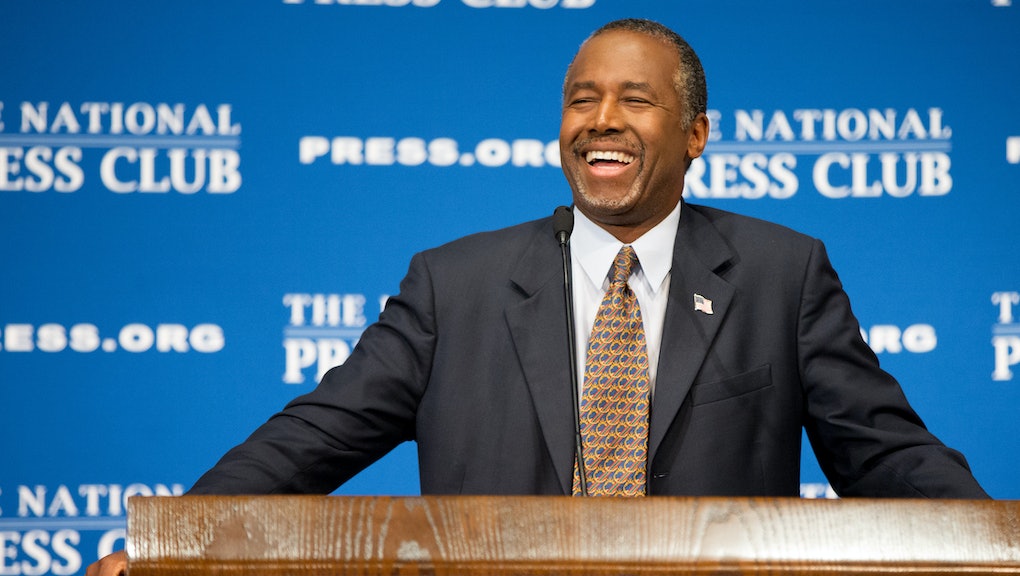 Carson fever is rising in Iowa.

In a Bloomberg Politics/Des Moines Register poll released Friday morning, Dr. Ben Carson jumped to the head of the pack of Republican candidates in the Hawkeye State, surpassing Donald Trump, with 28% support to Trump's 19%.

But the survey says as much about Carson's presidential prospects as the electorate poised to decide the 2016 nomination. In a series of questions seeking to pin down why exactly voters like Carson, the poll arrived at some remarkable conclusions.

To start: Eighty-one percent of voters, whether they support or Carson or not, said they found his comments describing Obamacare as "the worst thing that has happened in this nation since slavery" to be either "mostly" or "very attractive."

Presented with other out-there declarations, like when Carson suggested that a better-armed German public might have successfully fought off Hitler, or his claim that no Muslims should ever be elected president, the response was similarly positive, with 77% and 73% of voters, respectively, saying they liked what they heard.

Carson is also the clear leader on the broader favorability question. Eighty-four percent of Iowa Republicans see him in a positive light; only 12% have an unfavorable view. As importantly, just 4% say they are "not sure," so this is no fluke. According to the poll, the voters know Ben Carson and they really like his jam.

At least for now.

The other guys: Although Iowa has shown it has no qualms elevating an underdog or outsider — former Pennsylvania Sen. Rick Santorum won the state in 2012, and former Arkansas Gov. Mike Huckabee came out on top in 2008 — at least one party establishment favorite is making inroads with the state's deeply conservative primary base.

Florida Sen. Marco Rubio, who finished fourth in the overall poll with 9% and was the second choice of 11% more, scored a 70% approval rating. Only 20% said the didn't like him and 10% pleaded ignorance. For Rubio, who has quietly emerged as the (comparatively) moderate favorite, there is room to grow. Success in Iowa could send already anxious backers of former Florida Gov. Jeb Bush, who flounders in this poll like so many others, scrambling toward the young senator.

The only other elected official, past or present, to take some positive news from this latest round-up is Texas Sen. Ted Cruz. He has been working over the conservative and evangelical wings of the party — which, by chance, come together in Iowa — and is starting to see some movement.

Cruz has been Trump's most vocal apologist, taking every opportunity to stand by his side, literally so in Washington, D.C., a few weeks ago when they took the stage together to protest President Barack Obama's nuclear deal with Iran.

Now, with Trump sliding in Iowa — a "young intern" of his even retweeting the suggestion that voters there have been brain-damaged by genetically modified corn products — Cruz's long game is coming into focus. He finished third in this new poll, nine points shy of Trump at 10%.

But for today at least, this race belongs to Carson. The retired neurosurgeon with the preternaturally serene disposition is firing up Iowa, and putting another serious scare into the GOP establishment.